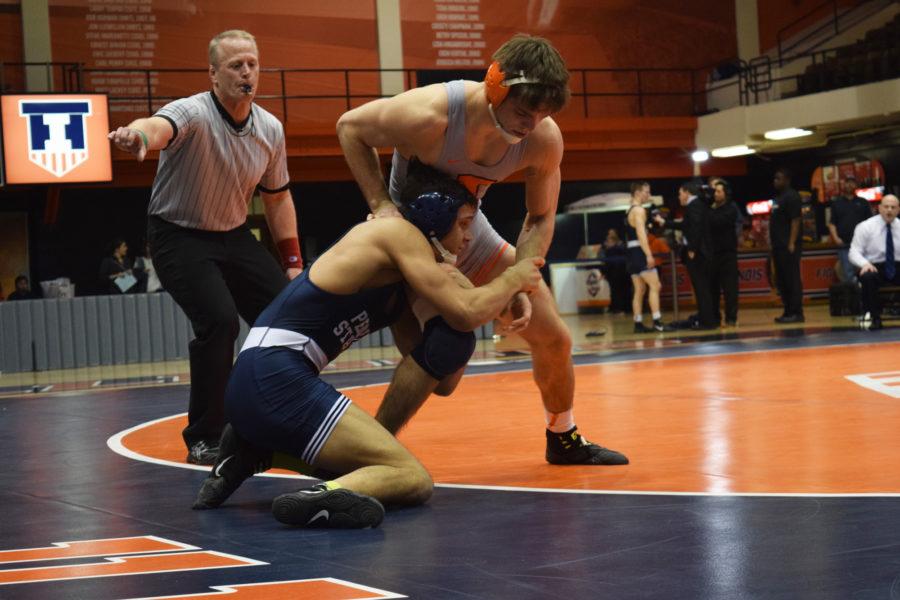 Tweet: [email protected] dominates down the stretch to pick up 12th win.

The Illini escaped Sunday with a 25-24 victory over the Northwestern Wildcats at Huff Hall. Illinois won five out of the last six matches after losing the first four to start the afternoon.

Garrison White, Dominick Malone, Jameson Oster and Jason Tsirtsis picked up early wins for the Wildcats to give Northwestern a 18-0 lead before the Illini rallied.CH

No. 2 Isaiah Martinez started the afternoon with a 55-second pin of Northwestern’s Anthony Petrone at 157 pounds to cut the Wildcat lead to 12.

The Illini then moved into double figures as senior Steven Rodrigues defeated Luke Norland by major decision, 12-3, to move Illinois to within eight points.CH

Rodrigues said that the performance still could have been much better.

As a senior, Rodrigues said that he only has a few more matches left to show how good he is — Friday’s match against Minnesota is the final last dual match of his career.

Another senior that performed well was Jeff Koepke at 184 pounds, who picked up a technical fall win over Regis Durbin of the Wildcats to give the Illini their first lead of the afternoon, at 19-18.CH

“He got a lead on me early, but I think it shows that if I push the pace that I can beat anybody,” Koepke said.

Koepke put 24 points on the board in his match and without No. 2 Zane Richards at 133 pounds, the Illini needed any strong performance they could get.

Durbin led 2-0 after a takedown before Koepke took control.

Leading 5-3 after the first period, Koepke took to his attacks early and often in the second period, as he carded four takedowns and a four-point nearfall during the frame.

Koepke then finished off Durbin in the third and final period to give the Illini five points on the board.

With Richards not being 100 percent over the past two duals, Illini head coach Jim Heffernan said that he looked for his guys to score big.

Heffernan got a big contribution fifth match of the day, as Martinez helped the Illini with his dominating performance.

“At that point of the meet we needed him,” Heffernan said. “We got off to a terrible start and we were in a giant hole, so we needed Isaiah to get a spark before the break and we needed the rest of the guys to score a bunch of points.”

The Illini outscored the Wildcats, 25-6, in the final six frames to pick up their 12th win on the season.