Northwestern’s season is the ghost of Illini basketball seasons past 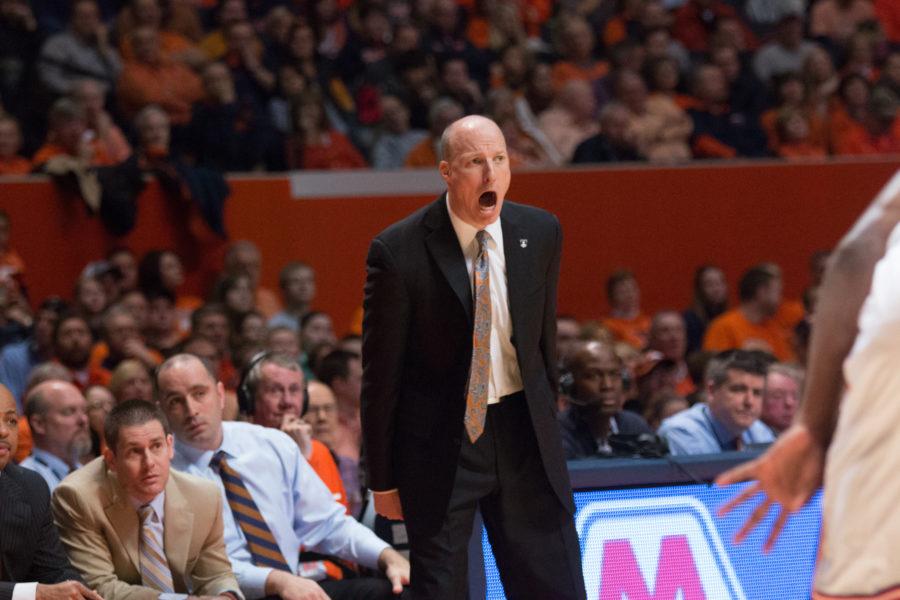 Illinois head coach John Groce yells instructions at his team during the Illini’s 78-67 loss to Nebraska at State Farm Center earlier this season.

Illinois fans might react to the arc this Northwestern basketball season has taken in a couple of ways.

Illini fans sympathetic to the Wildcats’ mirage of a 13-1 start would nod with grim familiarity, as Northwestern has since lost eight of its last 11 games. After all, Illinois has fizzled in Big Ten play after hot nonconference starts in every season this decade besides the current one. Illinois skipped a step this year, crushing fans’ hopes before they could get too high.

Other Illini die-hards look down on Northwestern with disdain, perturbed that the school that has always been a little brother athletically has been trying to manufacture a real rivalry through a combination of marketing digs and actual football and basketball success as of late. They would chuckle, their voice dripping with condescendence as they lectured ‘Cats fans for being so naive.

“You thought filling up on cupcakes in the nonconference could pave the way to Northwestern’s first NCAA tournament berth in school history?” the Illini hoops fan would say, jaded by a decade of false hope. “How cute.”

All anyone in Evanston had to do was look 130 miles south to see what can happen when a fast start is propped up by a schedule softer than Charmin. John Groce’s second season at Illinois in 2013-14 looks eerily similar on paper.

That team started off 13-2 by playing garbage teams in the nonconference and beginning Big Ten play 2-0, even checking in as the No. 23 team in the country before it all came crumbling down.

Those Illini went on to lose eight straight games and miss the NCAA tournament by a couple of inches, when Tracy Abrams’ Big Ten tournament floater against No. 8 Michigan — along with Illinois’ desperate late-season resurgence — fell short at the buzzer.

Having dropped six of its last seven and aching for a win when it faces Illinois Saturday night, Northwestern seems to be echoing the Illini’s crash-and-burn path of two years ago. The Big Dance isn’t out of the question yet, but with their best win coming over a barely-average Wisconsin team and only Purdue remaining on the schedule as a possible marquee victory, the Wildcats look poised for the NIT at best.

This article isn’t meant to disparage Northwestern or its fans who have had the rug pulled out from under them yet again this season.

If major contributors like Vic Law and Alex Olah hadn’t gone down with injuries, maybe the Wildcats would have been less susceptible to such a skid once conference play swung around. Head coach Chris Collins looks to be actually building a solid program, and at 16-9 and 3-7 in the Big Ten, he’s still having a better season than Illinois.

In the two teams’ only matchup of the season Saturday, Northwestern will play still clinging to that unlikely NCAA tournament dream. In reality, the game will probably matter more in determining which team earns the right to avoid one of the graveyard games on the opening Wednesday of the Big Ten Tournament next month.

The in-state rivalry should slightly juice up what would otherwise be an unremarkable matchup, as the 8,000-seat Welsh-Ryan Arena usually provides an intense atmosphere with a nearly-split crowd of orange and purple. With a 3-2 advantage over the Wildcats over the last three seasons, Groce is hanging on to a rare winning record over another Big Ten opponent.

To build on that success, Groce will have to strategize against sophomore guard Bryant McIntosh (leading his team with 14.8 points and 6.6 assists per game) and senior guard Tre Demps (14.7 points per game). McIntosh and Demps are both dangerous scorers and will demand most of Illinois’ defensive attention with the 7-footer Olah seeing fewer minutes since returning a month ago from a foot injury.

On offense, it’s likely going to be the same old formula for the Illini: rely on Malcolm Hill and Kendrick Nunn to carry most of the load while hoping for a scoring burst from the team’s three other legitimate threats to put the ball in the basket.

Groce’s best bet will be to find open looks for freshman shooting guard Jalen Coleman-Lands, who is coming off the best back-to-back games of his career after scoring 26 against Rutgers and 17 against Iowa. Big men Maverick Morgan and Michael Finke are also capable of doing damage offensively.

We won’t likely know if the Illini’s biggest big, Mike Thorne Jr., will return to the lineup from a meniscus injury until he actually checks into a game, but Illinois student Andrew Musur might have broken the news of Thorne’s return earlier this week on Twitter.

Musur apparently ran into Thorne at a Popeyes restaurant in Champaign, where he assured him he’ll suit up Saturday against the Wildcats.

We’ll see if Thorne was telling the truth, or if Popeyes’ fried chicken contains only temporary magic healing powers.

With or without Thorne Saturday, Illinois is in for a battle.