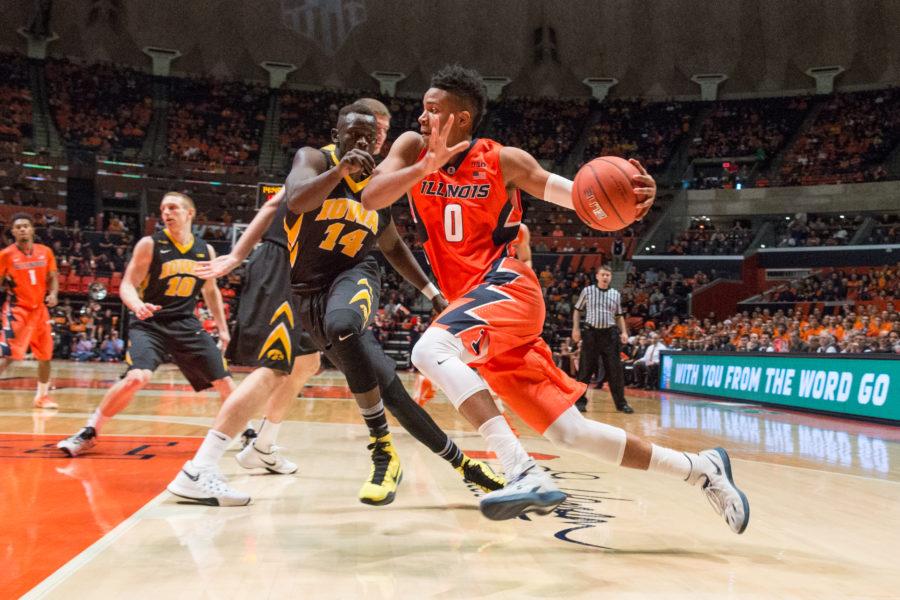 Illinois’ D.J. Williams drives to the basket during the game against Iowa at the State Farm Center on February 7. The Illini lost 77-65.

Illinois-Rutgers on Feb. 3 was a toddler on Red Bull in the form of a basketball game. At times, the disorganized, fast-paced affair seemed more like a Campus Recreation intramural game than a Big Ten matchup.

“The first game (against Rutgers) was a classic,” head coach John Groce said. “I’ve watched it now two different ways — through the eyes of the defense and offense, and then in the flow (of the game).”

Sanders is suspended for the next two weeks due to a violation of team rulesRB.

Sanders won’t suit up, but the Illini will have to keep an eye on Jonathan Laurent, Omari Grier and Mike Williams, who went for 23, 18 and 15 points, respectively, on Feb. 3.RB On the other side of the floor, Malcolm Hill, Kendrick Nunn and Jalen Coleman-Lands could all have big games against Rutgers’ porous defense.

When Eddie Jordan was fired as head coach of the Washington Wizards in 2008, it was because of his defense.RB

Eight years later, now in his third season with RutgersRB, Jordan still hasn’t figured out how to implement a successful defensive scheme. The Scarlet Knights give up 80 points per game, 332nd in the nation out of 351 Division I teamsRB. And at 39 percent, they rank last in the Big Ten in 3-point percentage allowed against conference opponents.

Illinois dropped 110 on Rutgers on Feb. 3, though that number is skewed, because triple overtime meant an extra 15 minutes of play.RB Hill posted 32 points, 14 rebounds and five assistsRB. Coleman-Lands scored a career-high 26 and Maverick Morgan added 20RB.

Freshman forward D.J. Williams has received increased minutes over his last three games. He played a career-high 20 minutes in a 58-56 loss to Northwestern on Saturday.RB

“D.J. has started to figure it out,” Groce said. “He’s playing with energy consistently. He’s making some mistakes, but he’s getting better.”

Prior to tearing his meniscus in the seventh game of the season, Thorne Jr. was averaging 12.9 points and 8.5 rebounds per game.RB Hill (6.5 RPG) and Nunn (5.4 RPG) have picked up some of the slack on the boards in Thorne’s absenceRB.

The Illini went through light practice Sunday and Monday.

“It’s that time of the year in February where you try to keep ‘em mentally and physically fresh and make sure they’ve got an edge,” Groce said. “We’ve got to be better defensively than we were in game one (versus Rutgers).”