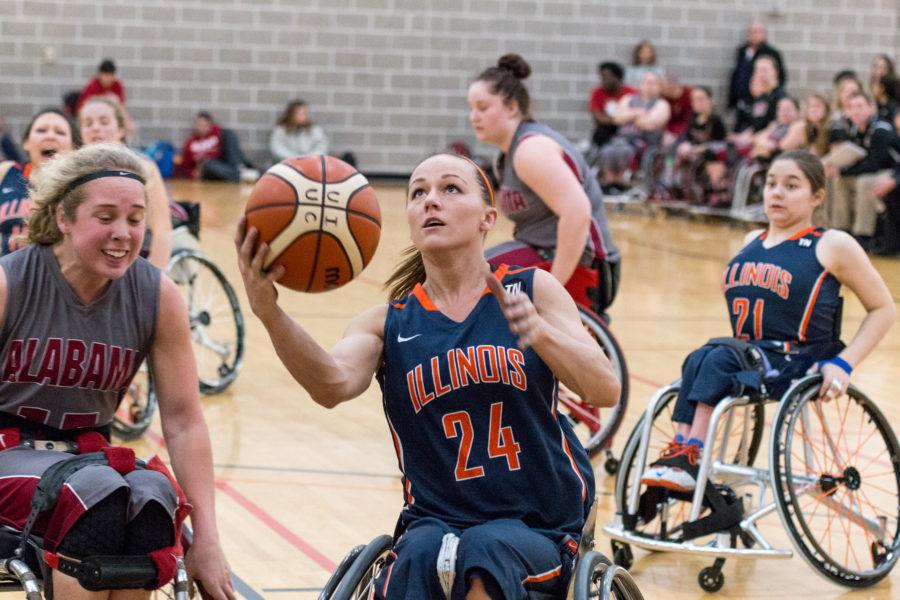 Over the weekend, the Illinois wheelchair basketball teams played in their second and final home tournaments of the season.

The tournaments were held at the ARC, and Illinois hosted Missouri, Alabama, UW-Whitewater, Edinboro and Arizona State.SO

In their first matchup, the Illini won 56-38 behind a triple-double from Gail Gaeng. She had 16 points, 11 rebounds, and 10 assists in one of her best all-around games of the season. Notably for Alabama, forward Arinn Young had a big game — she had 22 points and 14 rebounds.SO

Their second matchup was much closer, but the Illini pulled out a 60-54 victory. Gaeng had another big game, scoring 20 points, grabbing 15 rebounds and collecting eight assists. Megan Blunk, a member of the United States national team with Gaeng, also contributed heavily. She had 24 points, four rebounds and four assists.SO

In the tournament finale, the Illini routed the UW-Whitewater Warhawks 60-22. Many of the starters received extra rest after taking a 39-8 lead in the first half. In just 26 minutes, Gaeng scored 20 points, and added seven rebounds and five assists.SO

The men’s team wasn’t as dominant as the women’s, but still picked up wins against Arizona State and Edinboro.SO

In game one, the Illini fell 54-31 to Alabama. Ryan Neiswender was limited to 11 points and Spencer Heslop, who kept his team in it until the closing minutes of the second half, scored 17 points and six boards. SO

Stopping big man Michael Auprince proved to be Illinois’ toughest challenge. He had 15 points and 11 rebounds.SO

The Illini captured their first win of the tournament in game two against the co-ed Arizona State team 69-43. Heslop and Neiswender combined for 52 points, 12 assists and 14 rebounds.SO

Game three, the Illini won their second and final game of the tournament over Edinboro University, who will be hosting the national championships. Neiswender and Heslop had big games in the 49-30 victory. Neiswender put up 15 points, 8 rebounds, and five assists, while Heslop had 12 points and nine rebounds.SO

Next, the Illini would face defending men’s national champion UW-Whitewater, whom they lost to 59-47. Neiswender had another double-double — 13 points and 10 rebounds — while also adding six assists.SO

In their final game of the tournament, the Illini lost to Whitewater again, 65-48.SO Due to technical difficulties no statistics were recorded in the game.

Following this tournament, the Illini will have just one more tournament at Alabama, before heading off to Edinboro for nationals.