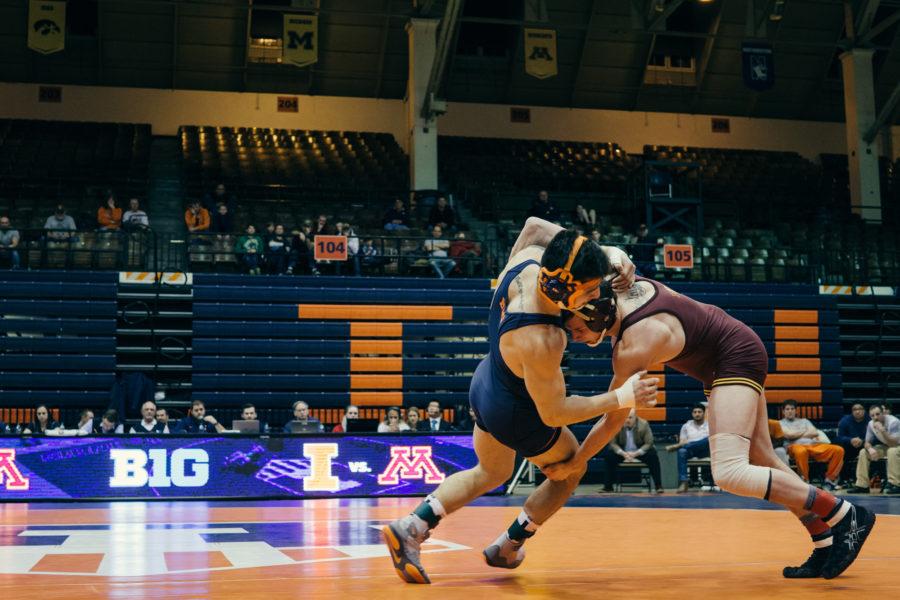 Senior Jeff Koepke improved to 18-5 on the season after Friday night’s victory in Illinois’ match against No. 18 Minnesota at Huff Hall, a team Illinois had not beat since the 2007-08 season. ag

Koepke defeated Chris Pfarr of the Golden Gophers, by decision, to move the Illini to 13-5 and 4-5 in the Big Ten with just two weeks away from the Big Ten Championships emanating in Iowa City, Iowa. ag

Koepke ended the season with a 7-3 record at 184 pounds in the Big Ten, winning five out of his last six matches. ag

Illinois’ 19-16 victory over Minnesota was the team’s first win over a ranked opponent during the dual season.

Four out of Illinois’ five losses came to team’s ranked in the top-10 at the time with Nebraska ranked 11th.

The Illini finished day one of the 2015 Big Ten Championships in fifth place with 79 points.

No. 2 Isaiah Martinez is the defending Big Ten champion at 157 pounds and said that he is excited to defend his title. ag

“We got about a three week layoff before we got to make weight and get ready to go,” Martinez said. “I’m excited. I’m ready to go and I’m having fun and I can’t wait until it comes.”

Martinez said he will be a two-time Big Ten champion by the end of the day on March 6, and that he will capture the title in impressive fashion.

Koepke is looking forward to competing in his final Big Ten Championships and looks forward to the challenge.

“I’m sure we’re going to push up the training a little bit these next two weeks and then the week of Big Ten’s, we’ll turn it down a little bit,” Koepke said. “This is what I’ve been training for my whole life and it’s my last go at it and I’m going to give it all I got.”

Head coach Jim Heffernan said that he is relieved that the postseason is finally arriving.

“It’s finally here and that’s what we train for, that’s what we’ve done all this work for, so these guys need to be excited about it,” Heffernan said. “We’re looking forward to it and it will be nice to give them a couple of days to be normal kids.”