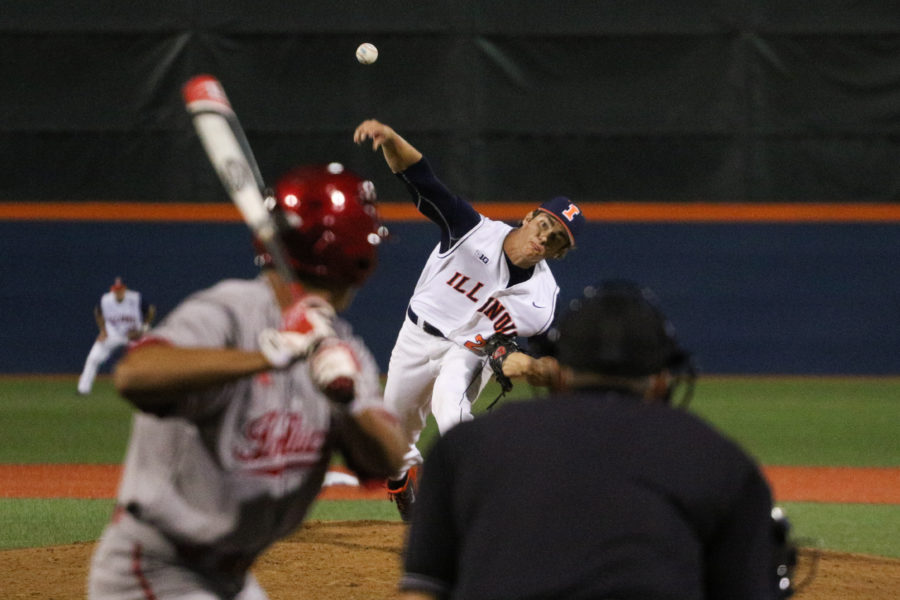 Illinois’ Cody Sedlock throws a pitch during the baseball game against Indiana at Illinois Field on April 17, 2015. Illinois won 5-1.

Tweet: [email protected] will use its games this weekend to round out the bottom of its lineup

Illinois baseball head coach Dan Hartleb said there are a lot of question marks floating around in his head.

But he clarified that they are not “the panic type of question marks.”

Illinois enters its first games of the season against No. 19 Tulane this weekend, but the bottom three spots of its lineup are as big of a question mark as any for Hartleb.

The top six spots in the lineup are set, but the bottom three spots are up for grabs among the Illini’s 15 new players.

“We are at a point where we need to go play,” Hartleb said. “I always say that there is a point in the preseason where you need to go play a different-colored uniform so we can figure out who is going to play at a certain level.”

Hartleb said last season’s lineup was concrete because he knew exactly what he was going to get from his players. That faith came from him seeing his players play so much — something he hasn’t had the opportunity to do with this team.

“I wish I could sit here and tell you exactly how things are going to work like I could last year,” Hartleb said. “But if you look at where we were at a year ago, we went through the same types of things with that group the previous two years.”

Despite question marks in the lineup, Illinois’ starting rotation for its three game series against Tulane is set.

Junior Cody Sedlock will get the nod for Friday’s season opener. Sedlock started two games last season, but appeared in 19 games as a reliever for the Illini and recorded a 4.02 ERA.

“Cody sits at 92-93 and touches 97 at times,” Hartleb said. “He has really improved on his command and has some plus off-speed stuff. So that gives us a legitimate number one for our Friday night games.”

Sedlock will hand the ball over to sophomore Doug Hayes for Saturdays game. Hayes — a leftie who appeared in only five games last season — will rely heavily on a two-seam fastball to control both sides of the plate.

Junior Andrew Mamlic will start the last game of the weekend on Sunday. Mamlic has been used primarily out of the bullpen in the past. He appeared in 18 games and recorded a 4.91 ERA f last season, but did not start in any of them.

That is the reason that senior catcher Jason Goldstein still has high aspirations for his team after the Big Ten coaches ranked Illinois fifth in the conference in the 2016 preseason coaches rankings.

Goldstein knows the Illini pitching staff has the arms, he said it is just a matter of going out on the mound and executing.

If the Illini pitchers do execute, Goldstein is confident that the Illini can have the same success as last season.