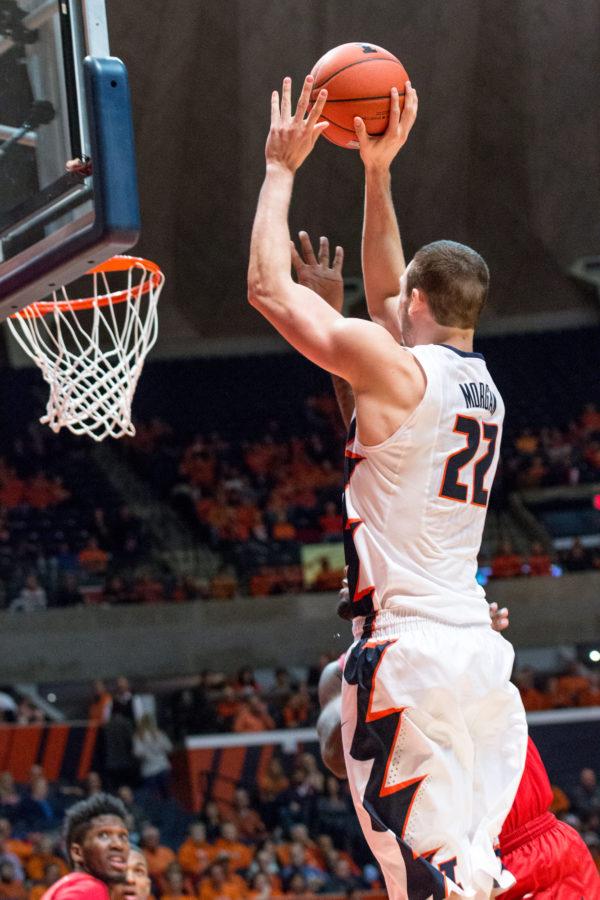 Illinois’ Maverick Morgan takes a short jumper during the game against Rutgers at the State Farm Center on February 17. The Illini won 82-66.

Tweet: Illinois coasted to an 82-66 win over Rutgers Tuesday, and it was hard to find fault in their performance

Something unique happened Wednesday while Illinois took on Rutgers at State Farm Center.

No, Illini head coach John Groce didn’t throw a chair onto the court. Malcolm Hill didn’t emulate Duke’s Grayson Allen and trip a Scarlet Knights player, either. This game’s unique occurrence was personal: I started this recap column at halftime.

Yes, for the first time this season, I felt confident that an Illini win was inevitable going into the break. It took a 47-25 halftime lead over the worst team in the Big Ten in game No. 26 to get me to that point, but with an 8 p.m. start Tuesday, I’m glad it finally happened.

The second half cooperated. The Illinois cruised to an 82-66 win over the hapless Scarlet Knights. Illinois (12-14, 4-8 Big Ten) inched closer to a .500 overall record with the win, and Rutgers fell to a woeful 6-20 overall and 0-13 in conference play.

“I think our team is really starting to come together,” Groce said after the game. “I’m excited about that.”

The only resistance Rutgers offered came early in the first half, as the Scarlet Knights nearly erased a 13-4 Illini lead and drew within two at 18-16. Illinois answered with a 15-2 run of its own, and the rout was on. Groce called a frustrated timeout late in the second half when Rutgers threatened to cut the deficit to single digits, but the Illini kept them at arm’s length.

Hill put the exclamation point on the blowout win early, eliciting the biggest cheer of the night from the crowd when his desperation 3-pointer at the shot clock buzzer found nothing but net from 35 feet away.

“I think every shot I take is going in,” Hill joked after the game.

Hill played through a sore hamstring after pulling the muscle in practice Monday. He still managed to put up 22 points and 10 rebounds on the Scarlet Knights.

The perimeter was kind to Hill’s teammates, too. Kendrick Nunn, who had shot 28 percent in his previous four games from three, hit four of eight treys on the evening on his way to 16 points. Freshman Jalen Coleman-Lands continued his run at the Illinois freshman season 3-pointer record of 85, set by Cory Bradford in 1998-99. With three more triples and nine points Tuesday, Coleman-Lands now has 65 threes on the season.

Look, Rutgers was already awful before it was announced its best player and point guard Corey Sanders was suspended for Tuesday’s game. Sanders hung 39 points, 12 assists and eight rebounds on Illinois in his team’s 110-101 triple-overtime loss two weeks ago, and he wasn’t in Champaign Tuesday for another crack at the Illini. Without him, Rutgers was beyond bad.

The only result that could have been acceptable for Illinois, its coaches and its fans against this Rutgers team was a wire-to-wire win, and that’s what the Illini delivered. It wasn’t a flawless performance, but they left little to complain about outside of taking their collective foot off the gas a bit with a big lead. Even if he won’t admit it, every game down the stretch of this lost season that keeps a lid on the negativity hovering over the program is a plus for Groce.

Illinois hasn’t executed well as a unit all season, and one win over an awful team doesn’t change that. However, Tuesday’s victory was another step in the individual developments of junior Maverick Morgan and freshman D.J. Williams.

Thrust into a starting role by injuries to Illinois’ frontcourt, Morgan’s emergence as a legitimate Big Ten center has been taking shape for the better part of conference play this season. His 17-point performance against Rutgers marked his fourth straight game scoring in double figures.

Williams was largely an afterthought on this roster until breaking out with eight points in the second half of a Feb. 7 loss to Iowa, but he put up eight points and grabbed five rebounds in 23 minutes against the Scarlet Knights. Williams is averaging seven points and just over three rebounds over his last four games, and is showing flashes of the versatility and slashing ability that could turn him into a major contributor as his career moves forward.

With the Big Ten Tournament left as the only remaining glimmer of hope of meaningful postseason play, keeping an eye on emerging Illini contributors is one way to keep fans optimistic about the future of hoops in Champaign. Coleman-Lands, Morgan and Williams provided that boost yet again against Rutgers.

Combine those performances with a double-digit win, and it’s hard to find fault with the Illinois’ effort Tuesday.