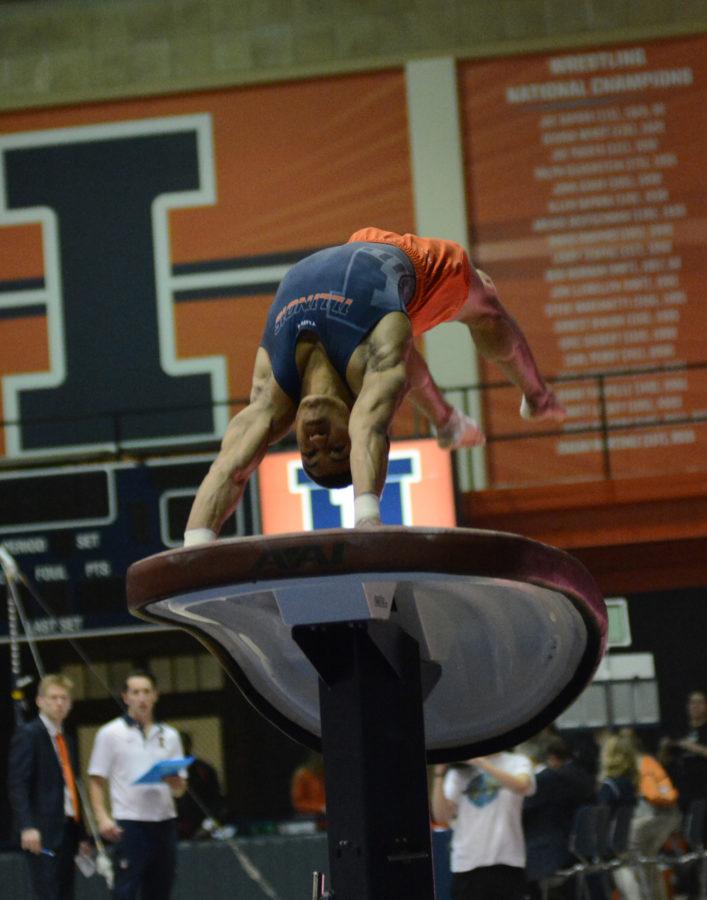 Illinois’ Chandler Eggleston performs a vault routine during the meet against Temple & UIC at Huff Hall on Saturday, Feb. 6, 2016.

Not competing is something
sophomore Chandler Eggleston did all last year due to a torn patella tendon.
On Saturday he did more of the same.

He sparked the Illini with big scores on vault and the floor
exercise early on in the season, earning Big Ten Gymnast of the Week honors along the way.

Coming into Saturday’s six-way meet full of some of the nation’s top teams, the sophomore seemed to be back to his old form. He was crowned the
top performer on floor and vault for three consecutive meets, averaging 15.417
and 15.100 respectively, but sat out on floor in Minneapolis and scored a
14.900 on vault – ending his win streaks.

The Australia native earned his first
career title on high bar at home against the University of Illinois-Chicago and
Temple. His career high 14.800 would not last long. The
sophomore swung his way to a 15.150 one week later in Minneapolis.

“I sprained my ankle like a week
before season and I’ve been struggling with it for a couple weeks now,” Bull
said. “It’s just been (about) getting my ankle right to finish off a good
routine.

Freshman Johnny Jacobson also had
an impressive outing at Minnesota’s Sports Pavilion. Fresh off being
named Big Ten Freshman of the week, the all-arounder followed up his career
high 86.500 with a solid score of 84.550 — earning him a fourth place finish in
the six-team meet.

“I’m getting a lot more confident
in myself,” Jacobson said. “I could be getting up there in the rankings pretty
soon.”

Sophomore Brandon Ngai is top-ranked pommel horse gymnast in the country. His 15.600 against Temple and
University of Illinois-Chicago was a career-best and NCAA season-high.

This Saturday in
Minneapolis, the 17-year-old event specialist did not perform his best, but
still competed well enough to share the event title. His score of 15.050 led
the way for Illinois, who was the only team to amass 70 points on the
apparatus.

Ngai’s has now racked up five
career titles, all this season, but his eyes are set on breaking
associate head coach’s Daniel Ribeiro’s pommel horse record of 16.000.

The Illini have three weeks until
their next team competition and Spring believes time can be used for both rest
and upgrades.

“You spend all summer training
trying to get new skills to the level that’re easy enough to put into this
monster 10-skill routine,” Spring said. “And that’s what we’re going to try to
do.”