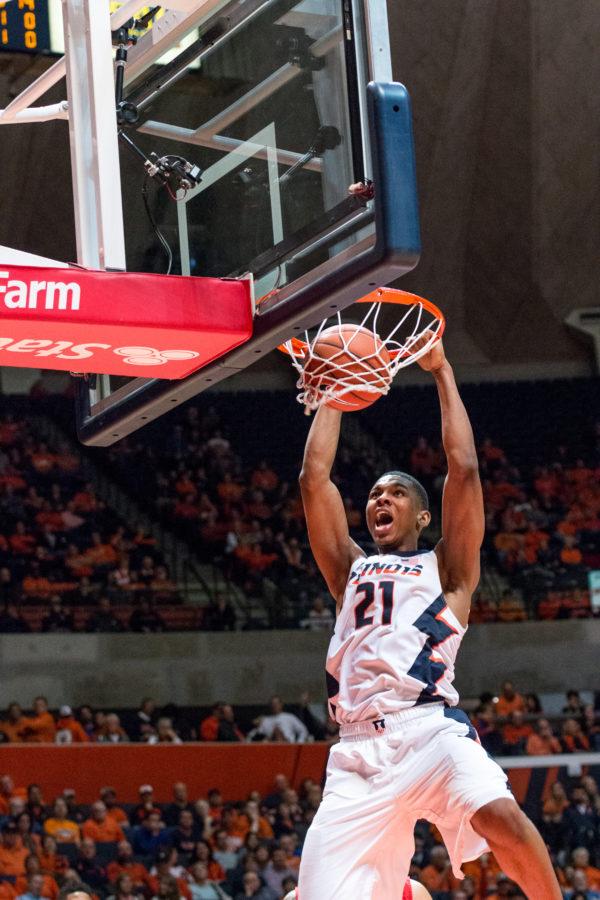 Malcolm Hill throws down a two handed dunk in the second half of Illinois’ victory over Rutgers on Tuesday Night. Hill recorded his sixth double-double of the season Tuesday.

tweet: The #Illini kept Rutgers winless in the Big Ten with a 82-66 win on Tuesday.

Malcolm Hill gingerly raced down the court for an easy lay-in after a Rutgers pass went straight into his arms on the other end. The bucket capped off a 13-4 Illini run, and the tone was set — Rutgers just couldn’t keep up.

The blowout marked Illinois’ largest margin of victory in conference play this season and Rutgers’ twenty-sixth consecutive Big Ten loss. The Illini led by as much as 25 points and held the lead for all but two minutes.

Despite being hobbled by a tweaked hamstring, Hill scorched Rutgers for his sixth double-double of the season with 22 points,10 rebounds, three assists and two steals. The junior captain also pushed the pace from the get-go and was the primary ball-handler for the second straight game.

A half-court heave to beat the shot clock was the cherry on top.

“I think every shot I shoot is going in,” Hill said with a grin.

Illinois rode a 29-7 run into the half, which featured a stretch during which its scored on 11 straight possessions. A large chunk of those buckets came in the open court, but in the half court, the Illini’s offense looked as fluid as it has all season — they had 10 assists on 17 first-half field goals.

“I thought we piggy-backed how well we played at Northwestern,” Groce said. “I felt pretty good about that.”

Both teams were relatively even in terms of field goal percentage, rebounding and free throw shooting, but a glaring discrepancy in points off turnovers proved to be the difference. Illinois pushed the rock down the floor with ease after every Rutgers miss or turnover, and the latter came in bunches — Illinois scored 21 points off 16 Rutgers turnovers.

For the third straight game, freshman forward D.J. Williams made the most of his minutes off the bench and wasn’t just a bright spot in a loss this time. He contributed eight points, four rebounds and an emphatic block that soared into the second row.

It looks the first-year wing has carved out a spot in Groce’s regular rotation for the remainder of the season.

“Williams is providing us great energy right now,” Groce said. “I’m really happy for him because he’s earned it.”

Sophomore center Maverick Morgan continued to blossom into a viable big man option with 17 points, five rebounds, four blocks and two assists. Graduate transfer Khalid Lewis racked up eight assists and a few highlight-reel ankle breakers, including a behind-the-back move in the open floor for two of his eight points. Junior guard Kendrick Nunn pitched in three steals and was 4-for-8 from deep — he’s 7-of-15 from beyond the arc over his last two games.

“We’ve got to be that type of team where everybody brings it,” Groce said.