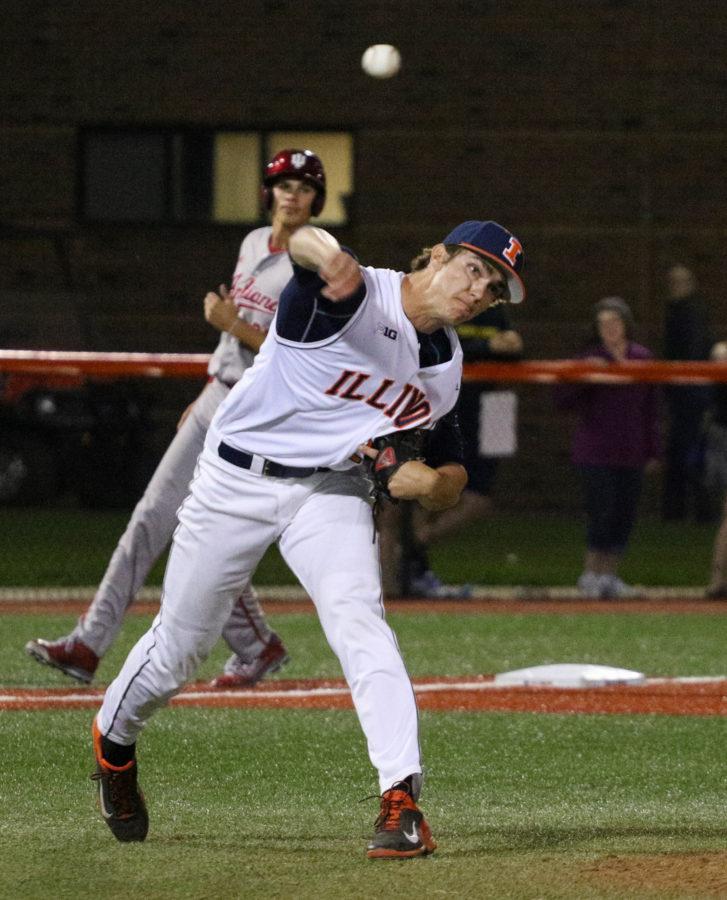 Illinois’ Cody Sedlock (29) throws the ball to first base during the baseball game v. Indiana at Illinois Field on Friday, Apr. 17, 2015. Illinois won 5-1.

Illinois football opened its season last Fall against Kent State and won 52-3. Illinois basketball squared up against University of Illinois-Springfield and won 104-69.ch

Illinois baseball is skipping its tune-up game this season. Instead, the Illini will travel to New Orleans this weekend to play their season-opening series against the No. 19 Tulane Green Waves.

Tulane is coming off a 35-25 season that ended with a loss in the regional round of the NCAA Tournament to UNC Wilmington.ch

Head coach Dan Hartleb said the tough competition this weekend is par for the course in terms of Illinois’ season.ch

“We are going to face very tough competition early,” Hartleb said. “Our first four or five weekends here, we are going to find a lot of things out. We aren’t playing any soft teams.”

But the teams’ pitching staffs are drastically different. Hartleb said Monday that the Illini’s starting rotation is set for the weekend. Junior Cody Sedlock will pitch Friday, sophomore Doug Hayes on Saturday, and senior Andrew Mamlic on Sunday.ch

That trio combined for 44 appearances last season. Sedlock is the only one who started a game — he had two.

Tulane’s pitching staff is much more experienced. The Green Waves are returning four pitchers this season who started in 11 or more games in 2015. They have five pitchers who appeared in at least 17 games last season, and not one of them had an ERA over 5.00 — Sedlock, Hayes and Mamlic all had ERAs over 4.00.

Seniors Nick Blackburn and J.D. Nielsen will be splitting time in the closer role. Last season, both worked as set up guys for Tyler Jay, the highest drafted player in Illinois history. Nielsen appeared in 24 games for the Illini last season.ch

“Coach Drew Dickinson is very big on having good guys in the bullpen,” Nielsen said. “I think that he wants to keep me and (Blackburn) in the bullpen compared to a starting role. I could definitely go four or five innings if they really needed me to, but they are limiting me to about two or three right now.”

The Illini are entering this season with a chip on their shoulders. Senior catcher Jason Goldstein knows Illinois is going to be highlighted on the calendars of its opponents. But he welcomes the challenge.

“I hope there is a target on our back,” Goldstein said. “I want to play teams that want to beat us. I think that will only bring out the best in us.”

With the season almost underway, Hartleb is noticing that there are high expectations surrounding his team.