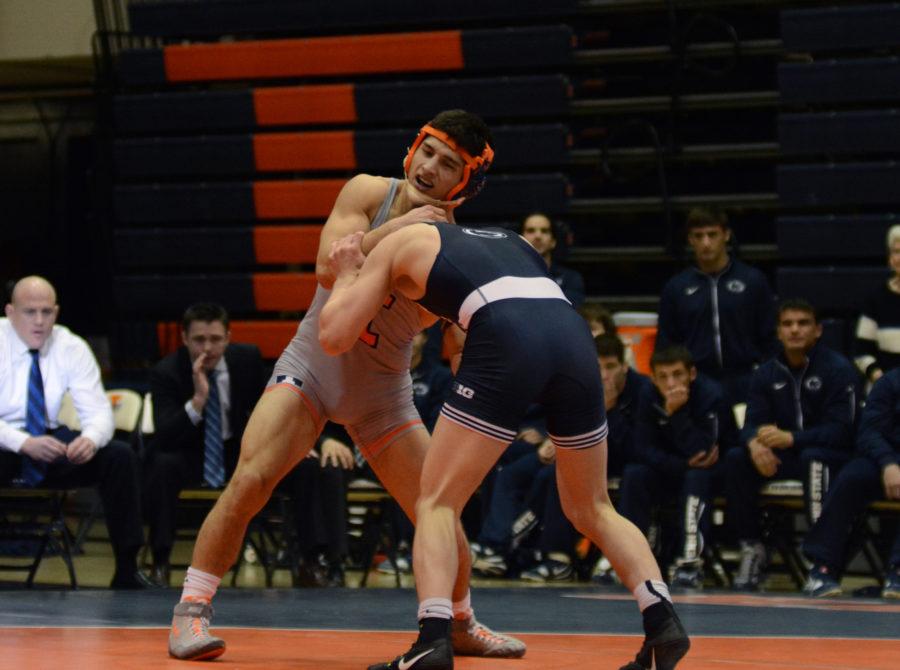 Most of the Big Ten teams are competing against non-conference opponents this weekend, with the regular season officially ending on Sunday.

As of today, Iowa and Penn State are tied atop the Big Ten conference at 9-0. Michigan is third at 8-1.

Analysis: The No. 1 ranked Nittany Lions have been the top team in the nation since November 17 and have dominated through their schedule, defeating opponents by an average of 27 points. Penn State has won four out of the last five Big Ten championships.

Analysis: No. 8 Michigan has the fourth most Big Ten championships in the conference with 11 team titles. The Wolverines are led by heavyweight Adam Coon, who is ranked No. 4 in his class with a 15-0 record.

Analysis: The co-defending Big Ten and NCAA champion Buckeyes are ranked ninth in the country with the No. 1 ranked wrestler at 125 pounds in Nathan Tomasello.

Analysis: The Scarlet Knights have won their last two duals and have a tough non-conference dual against No. 7 Lehigh at the Rutgers Athletic Center on Saturday.

Analysis: The Golden Gopher are coming off of a tough loss against the Illini last Friday and are tied for fifth in the conference. Minnesota has 10 Big Ten titles with its last coming in 2007.

Analysis: All five of the Illini’s losses are against ranked opponents. Illinois is led by No. 2 Isaiah Martinez at 157 pounds, who lost his first ever collegiate match against Penn State’s Jason Nolf in January. No. 2 Zane Richards is also having a good campaign. The 133 pounder has a 21-0 overall record and is 7-0 in the Big Ten. The Illini have the second most Big Ten championships with 17.

Analysis: Purdue is ranked No. 23 in the country but are just 1-5 in its last six duals. Purdue faces unranked Southern Illinois Edwardsville on Friday and Dukeon Sunday to conclude its season.

Analysis: Indiana has lost its last five duals by an average of 23 points and face Appalachian State on Sunday to end the season. The Hoosiers have the third most Big Ten championships with 13.

Analysis: One of the Badgers two wins on the season was against No. 13 Rutgers in early February by three points. Wisconsin has never boasted a team Big Ten championship, but has crowned 68 individual champions.

Analysis: Maryland is just 1-7 in its last eight matches and face Rider on Saturday at the XFINITY Center.

Analysis: Michigan State’s only win in conference was against Northwestern with its most recent loss coming to top ranked Penn State, 41-3.