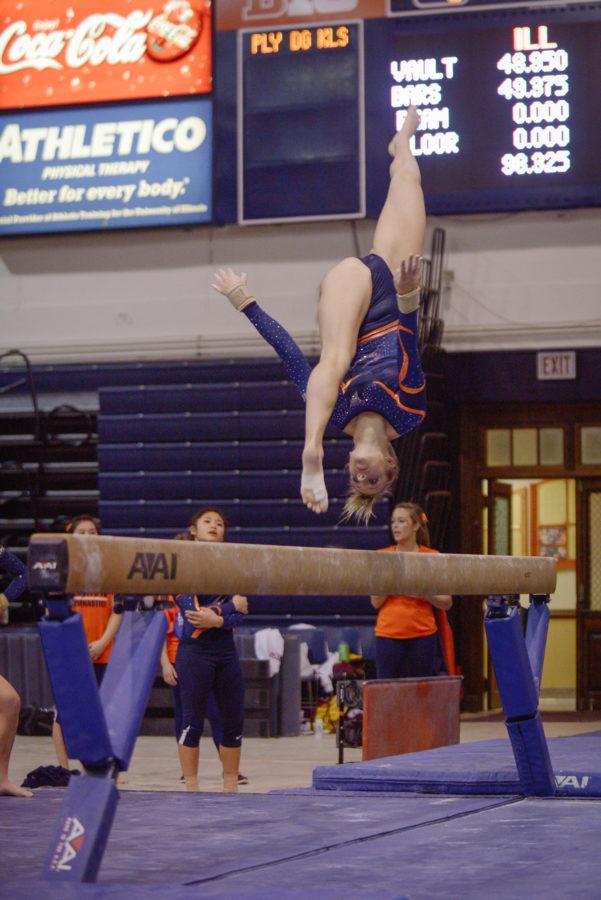 Illinois’ Heather Foley performs a routine on the balance beam during the meet against Minnesota at Huff Hall on Saturday, February 7, 2015. The Illini won 195.775-195.375.

The Illinois women’s gymnastics team hits the road this weekend to take on its final Big Ten opponent of the regular season.

The Illini have had an unsuccessful past two weeks, racking up two conference losses against Minnesota and Iowa. A prominent factor in the losses is the absence of Illinois all-around gymnast Mary Jane Horth.

Horth was sidelined for injury before the meet against Minnesota and will remain out of competition for this upcoming meet.

With Horth’s absence indefinite, the team has to fill the gaps left and rely on other all-arounders to rack up points for the team.

“We have talented girls on the team that are stepping up and trying to fill MJ’s spots,” senior Giana O’Connor said. “There’s a lot of room for improvement but they’re trying their best to work on details and hit their routines.”

North’s absence may have been a small factor in the recent losses, but there are other factors that the team has had problems with. O’Connor says that confidence and details are big areas to work on going forward.

“As a team we need to work on our landings,” O’Connor said. “More sticks will give us tenths and raise our team total.”

One of the gymnasts that is doing well to keep the team’s total afloat is freshman Lizzy LeDuc who has been improving throughout her debut season. In the past two weeks, she has set consecutive career bests in the all-around.

“It’s definitely nice to see steps taken towards my goals,” LeDuc said, “I just want to keep practicing consistently then bring that out in competition.”

Looking towards the conference championships, Landrus says the team has what it takes to compete against fellow conference teams and is encouraging the team to believe so as well.

“The coaches are being very motivating,” senior Heather Foley said. “They’ve been encouraging us that we haven’t been doing our best and that we can beat all of the teams that we’ve lost to.”

The NCAA Regionals are not far, and Landrus is confident that their mid-season lull won’t be a factor in qualifying.

“The RQS (Regional Qualifying Score) takes the best six scores and we have six weeks remaining in the regular season,” Landrus said. “So if we can figure out a way to fine-tune the details, the slow start to the season won’t have as much of an impact on us.”

Illinois’s team score has yet to dip below 195.000, with a current average of 195.263. However, with Illinois scoring in the lower 195’s the past few weeks and Michigan State hitting a season high 195.425 last week, this matchup will be close.

For the Illini to leave East Lansing, Michigan, victorious, they will need to boast scores on beam and floor that they saw earlier in the season and show consistent routines on uneven bars and vault. Landrus says it will come down to the gymnasts being aggressive and confident.

“Confidence breeds confidence; they need to build on each other, focusing on what we do in practice everyday and being aggressive when they go out to compete.”