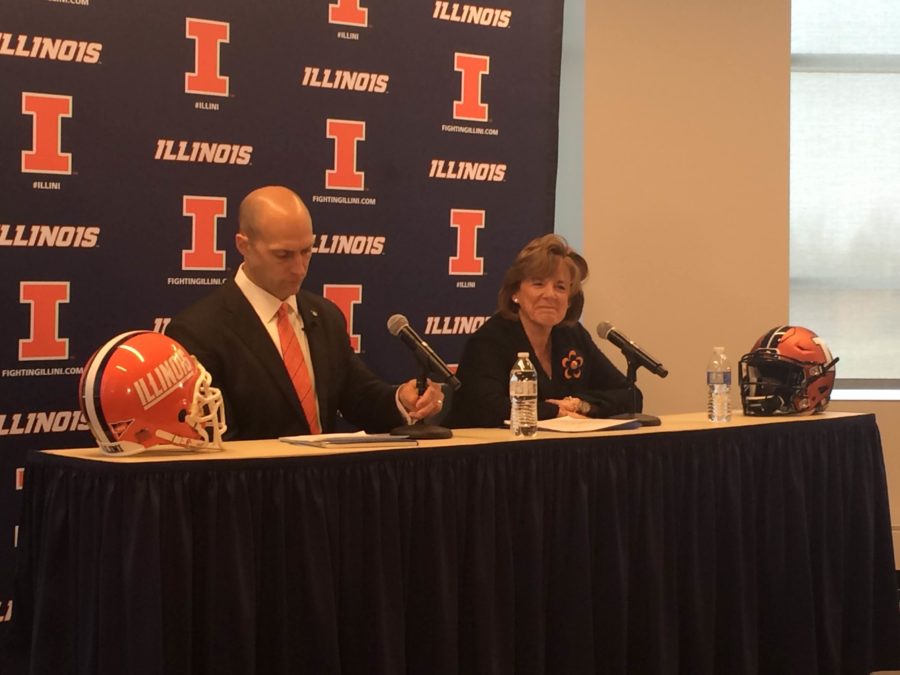 For Josh Whitman, reality is slowing sinking in.

His position as Illinois’ prospective athletic director was announced Wednesday night and he was introduced to the campus community at a press conference Thursday.

But it was a four-mile 6 a.m. run through campus on Thursday morning that really helped Whitman comprehend the moment. Stopping for selfies with Alma Mater and Memorial Stadium, the former Illini footballer was excited to be back.

“To realize we’re coming back here and we’re going to be here a long time, it was pretty impactful,” Whitman said.

Whitman played as a tight end under Ron Turner starting in 1997. After graduation, he played parts of four seasons in the NFL.

He enrolled in the University’s Law school in 2005 and graduated in 2008. He became the athletic director at University of Wisconsin La-Crosse in 2011 and took the same job at Washington University St. Louis in 2014.

Then opportunity came knocking and Interim Chancellor Barbara Wilson offered him the job been dreaming of since his own time at Illinois.

“I’ve lived this moment in my mind probably a million times,” Whitman said. “Ever since freshman or sophomore year in college, this is what I’ve wanted to do.”

Now Whitman is back on campus and ready to use his experiences and love for Illinois to continue developing relationships that will make the department stronger.

During the press conference, Whitman thanked the search committee, Wilson, the University, his family and past teammates and coaches.

He outlined his goals for the program and shared a vision of an Illinois athletic department united with its fans over a shared love of the orange and blue.

Wilson said she first observed Whitman’s ability in her interview with him. He impressed her so much during the interview that she didn’t take notes.

Later when talking about the athletic director requirements with a group of Illinois coaches during the process, she fielded one question that stood out.

“One of them said, ‘You’re looking for someone who walks on water?” Wilson said. “I said, ‘Yeah we are basically and we found him.’”

But Whitman isn’t focused on being that guy.

“I’m not the savior of Illinois athletics,” Whitman said. “I don’t walk on water. I’m just one of the pieces of a very big group of committed people.”

Even with football experience, Whitman does not plan on interjecting much in the football program, despite his experience in Memorial Stadium.

Head football coach Bill Cubit said he’s already noticed a peaked interest in Illinois athletics with the announcement. He added it will assist recruiting to have a stable athletic director.

“Football is a different sport,” Cubit said. “It’s a large number. You’re talking about 105 people that constitute a team. Unless you’ve gone through that, you just don’t understand that. It’s not an individual sport, it’s a team sport.”

The technicalities will come later and for now Whitman is looking at the team picture: making Illinois better.

He outlined three key points during his press conference as he begins his transition to Illinois.

His first focus will be on the student athlete, saying that every decision will be based on preparing them for life after school. His second goal is inspiring Illini nation after a year of struggles.

His third goal is athletic success. Or as he put it, “we will win.”

While Whitman acknowledged it would take time, he’s ready to start when he takes over the job on March 21. Wilson said the contract is still being worked out, but Whitman will be earning $600,000 a year with a five-year contract. He will be able to earn bonuses for academic and athletic success.

In front of a full crowd including his smiling parents and wife, Whitman seemed ready to take over the helm.

“This is an opportunity to take the last job that I hope I ever have,” Whitman said.