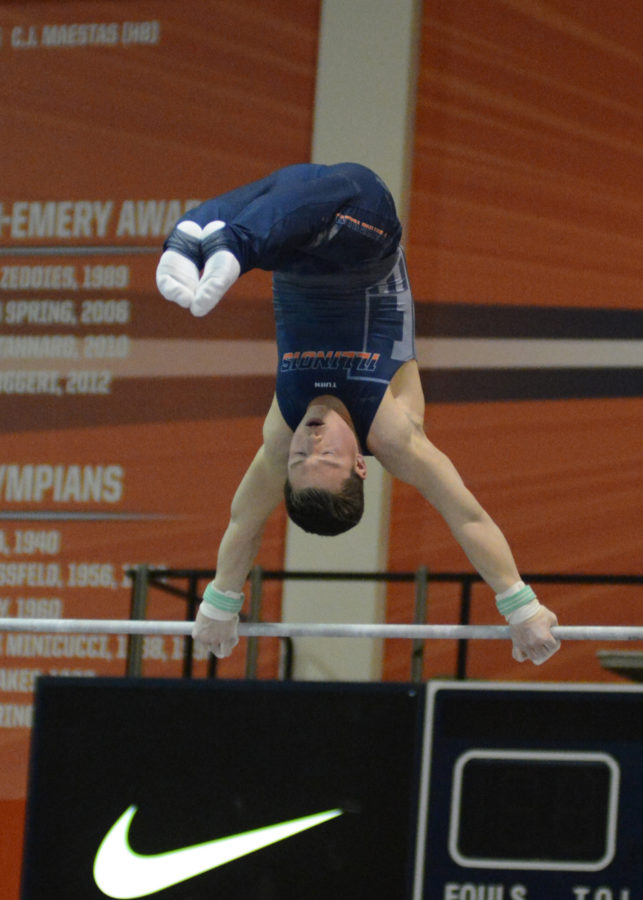 Illinois’ Alex Diab performs a bar routine during the meet against Temple & UIC at Huff Hall on Saturday, Feb. 6, 2016.

All-arounder Alex Diab is the lone Illinois men’s gymnast attending the Winter Cup Challenge in Las Vegas on Feb. 18-20. He will compete alongside top performers from around the country, including former Illinois star C.J. Maestas. A strong enough performance will earn him a spot on the U.S. Men’s Senior National Team.

Of the 15 available spots, seven gymnasts, including former Ohio State standout Brandon Wynn, have solidified their roster spot — since those seven represented the U.S. in the 2015 World Championships, they are automatically given a spot.

“Alex competed there last year as a junior (gymnast),” head coach Justin Spring said. “We had already signed him by that point so we were just watching him in excitement.”

Diab finished 21st in the all-around competition at last year’s Winter Cup with a reading of 163.600.

“We recruited Alex because we knew he had the gymnastics talent,” Spring said. “But also (because of) the mindfulness around the little things that matter.”

Taking part in four of the six Illini all-around competitions this season, he’s coming into this year’s Winter Cup Competition with an average score of 83.788 in the event.

He took home his first collegiate title earlier this year scoring 15.300 on still rings. The eight best gymnasts from the Winter Cup Challenge will move on to represent the U.S. Senior National Team at the Gymnastics Championships in June, making it a possible for some to take their first step toward wearing USA across their chest for the 2016 Summer Olympics in Rio.