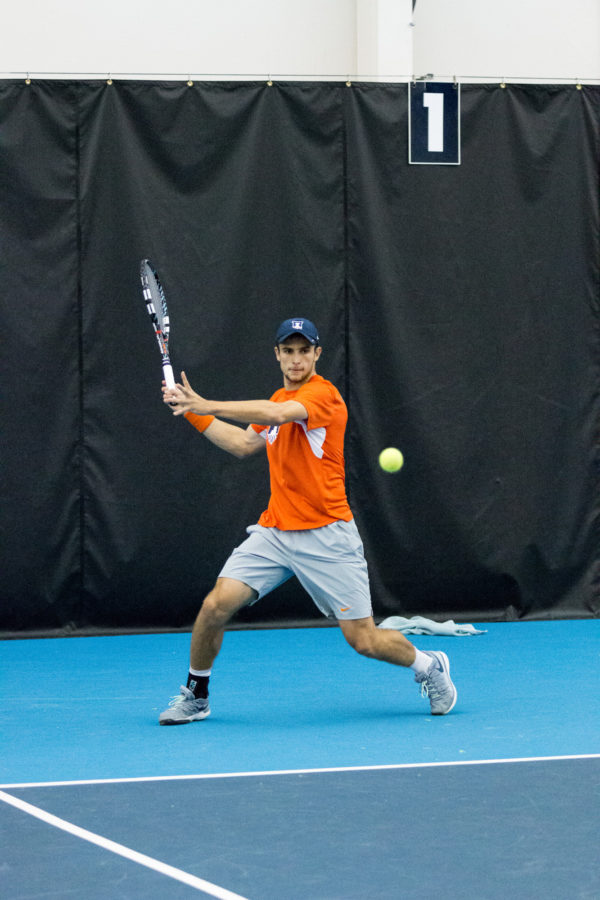 Illinois' Aleks Vukic gets ready to return the ball during the match against Notre Dame at the Atkins Tennis Center on Friday, February 5. The Illini won 5-2.

The sophomore, who is currently ranked No. 12 in the latest ITA National Player Rankings, took on No. 7 Roberto Cid at the ITA National Team Indoor Championships.

With the completion of the rest of the matches between Illinois and South Florida, the top-15 matchup would decide the match. After closing out the first set tiebreaker, Vukic went on to complete the upset with a 7-6, 6-4 victory over Cid. As a result, the Illini defeated South Florida, 4-3.

“I think we know where we are and where we need to be, so it will be exciting playing these next three matches at home,” Vukic said.

After the Illini take on Texas A&M, the team will host No. 2 Virginia and No. 3 TCU the following weekend.

Vukic is not the lone Illini in the ITA top-15, as fellow teammate and senior Jared Hiltzik is currently ranked No. 10. The two Illini have split time at the No. 1 singles position this year, and one of the players will have to face another top-10 foe over the weekend.

Texas A&M’s Arthur Rinderkneck is currently ranked No. 8. He and his team will be headed to Champaign to face the Illini on Sunday.

The Aggies enter the match with a 10-2 record, but recently dropped two straight matches to No. 9 UCLA and No. 8 Ohio State in the ITA National Indoors Championships. Texas A&M will head to Columbus to face the Buckeyes again on Friday before the team travels to Atkins Tennis Center. The Aggies have one other player in the top-40, No. 39 Shane Vinsant.

Head coach Brad Dancer said that the coaches will determine who will face Rinderkneck in their pregame meeting.

“We’re going to prepare our guys like we always do, we don’t worry too much about outside things,” Dancer said. “By the time (Texas A&M) gets here, they will be really ready to feast on us and then try to get home.”

Senior Jared Hiltzik is indifferent to where he plays on the team and knows he has to be prepared for whoever the opponent is on the other side of the net.

“I’m not concerned about that at all. Whatever the team does is all that matters,” Hiltzik said.

Hiltzik went 2-1 over the weekend, highlighted by a victory over No. 26 Dominic Cotrone of South Florida.

Illinois is coming off a 1-2 campaign from the weekend tournament. The team dropped its first matchup to TCU, defeated South Florida and fell to Oklahoma, 4-2.

Dancer said that the doubles play of his team needs to improve. His team failed to garner a point from that position over the weekend.

“I thought our doubles improved over the weekend, especially against Oklahoma, but we did not capitalize on some situations that we had,” Dancer said.

Senior Brian Page will look to stay in the lineup this weekend. He was inserted into the lineup for the first time this season. Page has been confronted with multiple injuries over his career, so Dancer was glad to see Page on the court again and expects him to see more playing time on Sunday.