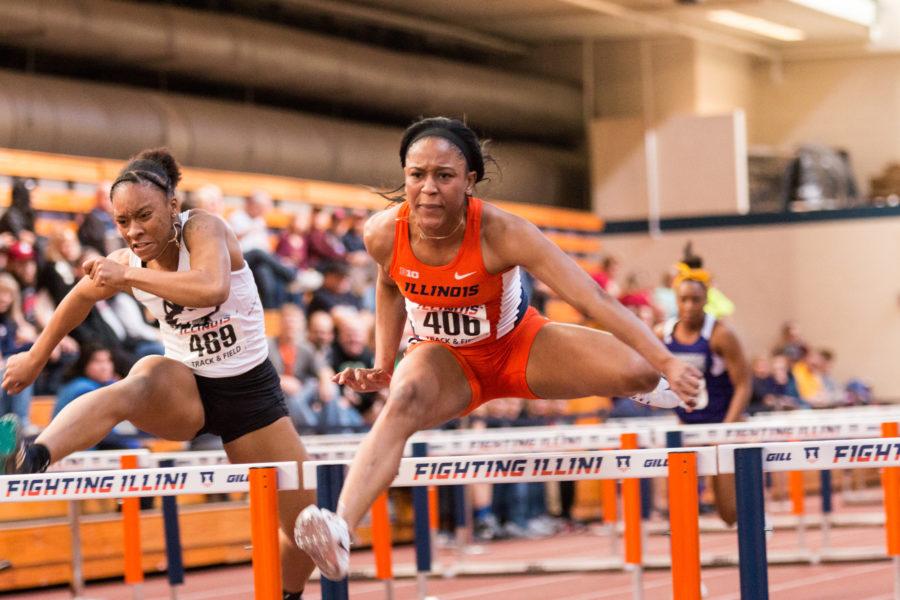 Illinois' Pedrya Seymour leaps over a hurdle during the Orange and Blue meet on Saturday, February 20, 2016. Pedrya won the 60 meter hurdles with a time of 8.27 seconds.

In its final meet before the Big Ten Championships next weekend, the Illini women’s track and field team claimed four event titles at the Orange and Blue Open at the Armory.

Sophomore Pedrya Seymour was the first Illini to walk away with a title, winning the 60-meter hurdles and matching her personal record in the process.EJ

Seymour ran the 60-meter hurdles in 8.27 seconds at the Iowa State Classic last weekend and matched that personal best time this weekend.

“Coming into this race I just wanted to have fun and prepare for the Big Tens,” Seymour said. “I wasn’t able to PR but I came really close, so hopefully next week I’ll be tuned up and ready to go.”

Seymour will look to continue her good form and try to beat her mark on the big stage at the Big Ten Championships in Geneva, Ohio. Junior Kortni Smyers-Jones also qualified for the 60-meter hurdles finals, and finished in fourth in 8.51.EJ

Bloch-Jones rebounded after a down performance at the Iowa State Classic with a win in the high jump. She cleared 1.81 meters on her first attempt — her highest jump of the day — and finished well ahead of her competition, beating out second place Tessa Holland of Illinois State by 0.15 meters.EJ

Winter won the mile in 5:00.09, setting a new personal best along the way. She and sophomore Denise Branch finished first and second overall for the Illini, pulling ahead of the pack in the final lap. Branch set her own personal best, finishing 46-hundredths of a second behind Winter.EJ

The Illini finished the day strong with the 4×400 relay team winning in the final race of the day.EJ Junior Lindsey Rakosnik, freshman Twinkle Mehta, redshirt freshman Kristina Kladar and sophomore Jasmine Berry came from behind to win in 3:56.79.EJ

The Illini started out strong and stayed neck and neck with the team from Northern Illinois, but found themselves behind as Kladar passed the baton to Berry, the relay’s anchor. Berry began to close the distance between herself and the Huskies’ runner, giving the Illini a 2.42 second win.

In the 400 meter, Rakosnik set a new personal best, finishing in third place in 58.33.EJ Also running the 400 for the Illini were sophomore Miranda Merry and Mehta, who finished in sixth and ninth respectively.