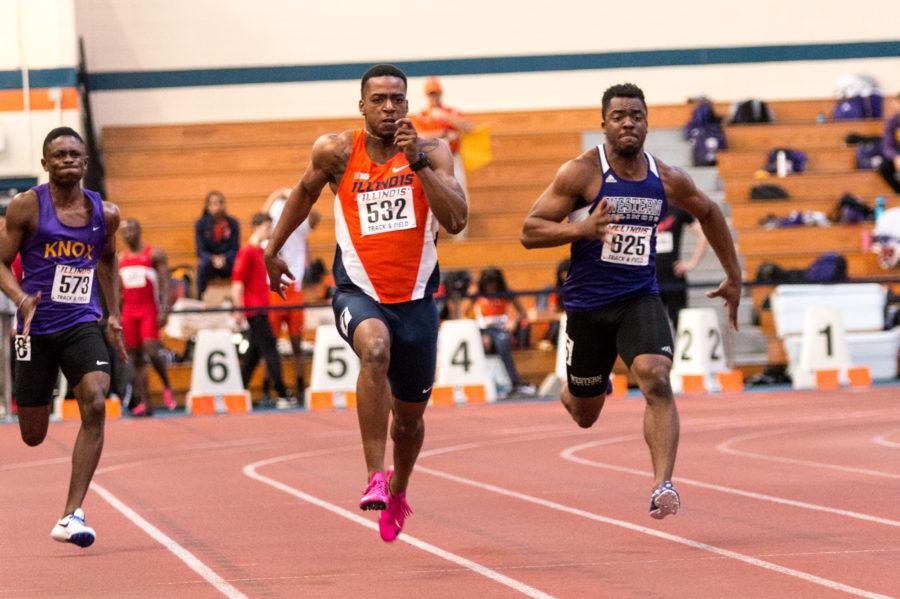 In the 3000 meters, Dylan Lafond, Ian Barnett and Jesse Reiser had separated themselves from the pack.AG

Each runner seemed to be on pace to finish just beyond eight minutes, when, halfway through the race, Lafond and Barnett stopped suddenly and walked off the track.AG

Reiser, who was running unattached, would go on to win the race in eight minutes and 12 seconds. While the stop may have seemed spontaneous, it was pre-meditated.

The race may have seemed pretty unusual, it sums up the weekend for the Illini. Many of the Illini’s big runners performed in a limited capacity, like Lafond and Barrett, while others sat out entirely. The meet was mainly used as a platform for younger members of the team and those who are recovering from injury.

“We had some really high-end performances,” head coach Mike Turk said. “For a low-key meet a week before Big Tens, that’s a really good sign.”

With easy in-state competition, many athletes found the success they were looking for with just a week before Big Ten Championships. Cam Viney took first place and recorded a personal record of 7.78 seconds in one of his best events, the 60-meter hurdles.AG

Additionally, Mo Maat, who has battled injuries on and off this season, bounced back with a first place finish in the 60 meters.AG

“This is a step along the way,” Maat said. “It’s gonna be a process to get where I want to get, and get back to where I was.”

With most of the big name athletes sitting out, the Open offered an opportunity for younger members of the team to succeed. Reiser took first in the 3000,AG but he wasn’t alone in posting a strong finish. Freshman Konrad Eiring, who has had a limited role all season, took first in the 800 meters.AG

Illinois also had success in field events, with Michael Hyc and Matsen Dziedzic taking first and second in the shot put and Blaze Galardy taking first in the pole vault.AG

With a couple strong performances over the weekend, Turk has considered the possibility of moving some pieces around after some performances in the Open before finalizing his Big Ten roster. The conference championships are next weekend in Geneva, Ohio. “We really try to keep things simple,” Turk said. “ We aren’t as stringent as a football program, but we do have a routine, and we’re looking to sharpen our workouts, but also make sure they get a little bit of recuperation.”AG