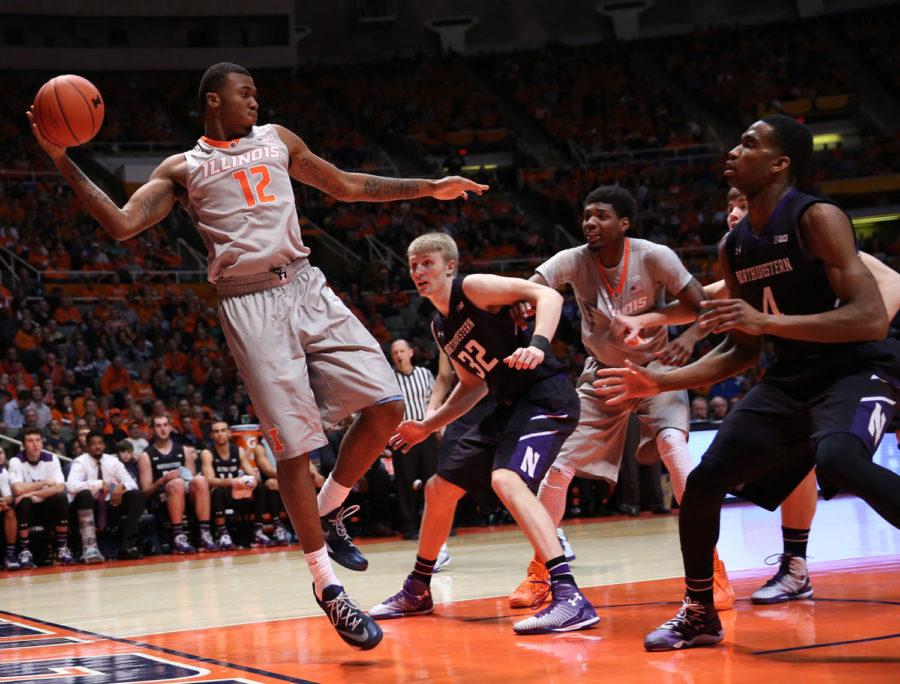 Illinois’ Leron Black (12) attempts to save the ball from going out of bounds during the game against Northwestern at State Farm Center, on Saturday, Feb. 28, 2015. The Illini won 86-60.

Tweet: Illinois visits Wisconsin on Saturday, who the #Illini haven’t beaten since 2011

When Wisconsin visited Illinois at the end of January, the Badgers’ identity was cloudy.

The Badgers moved to 13-9 and 5-4 in the Big Ten with their win over the listless Illini on Jan. 31 in what was their fourth victory in a row. Looking more and more like a NCAA tournament team, Wisconsin went on to extend that winning streak to seven before falling at No. 8 Michigan State on Thursday.

Illinois sophomore forward Leron Black’s arrest for allegedly threatening a club bouncer with a knife early Friday morning was the latest head-shaking moment for everyone involved with Illini basketball.

But unlike the injuries that have hammered this team, Black’s incident could have easily been avoided.

Black was already shelved with a meniscus injury and wouldn’t have been available in Illinois’ second meeting with the Badgers regardless, but his incident means the Illini will take the floor Sunday in Madison with an unnecessary distraction hanging over their heads.

Any team is traditionally at a disadvantage entering the Kohl Center, and this Illinois squad already looked overmatched in their first game against Wisconsin.

As expected, Nigel Hayes was the best player on the floor three Sundays ago in Champaign. The All-Big Ten junior scored 17 points, but it was the contribution of a rarely-used freshman that caught Illinois off guard. Forward Khalil Iverson scored a career-high 10 points in 30 minutes against the Illini, providing the difference in Wisconsin’s 63-55 win.

He’s scored two total points in the four games since.

To pull off the upset Sunday, Illinois can’t afford to get burned by a reserve like Iverson again. It will be difficult to contain all three of Hayes, Bronson Koenig and freshman Ethan Happ, who all average double-digits in scoring for the Badgers.

If secondary players like Iverson, Vitto Brown or Zak Showalter have a big night on top of usual contributions from Wisconsin’s top three threats, it will be extremely tough for Illinois to escape with a win.

The same is true on Illinois’ end. Maverick Morgan, DJ Williams and Jalen Coleman-Lands are in the midst of a spectacular stretch, each emerging as consistent offensive threats over their last four games for the Illini.

In Illinois’ last loss to the Badgers, those three combined for eight points, and Williams wasn’t even a regular part of the rotation yet. If that trio can approach their combined 37.8 point scoring average they’ve posted over their last four games Sunday, the rematch could look completely different.

Of course, that’s assuming Malcolm Hill and Kendrick Nunn are up to their usual tricks. As I’ve constantly mentioned this season, Illinois needs an elite level of production from both of them to win pretty much any Big Ten game.

At this point, you know Illini head coach John Groce has to be sick of losing to Wisconsin. He’s 0-6 at Illinois against Wisconsin, and fans have to be forgetting what it even feels like to beat the Badgers. Illinois’ last win against them came in Jan. 2011.

Anything can happen Sunday, but the Illini are clear underdogs for a reason. Wisconsin has been rolling, and Illinois has stumbled at nearly every turn.

If the Illini come home Sunday night with anything better than a close loss, it will be a major surprise.