Illinois basketball’s NIT chances slim to none after Wisconsin loss 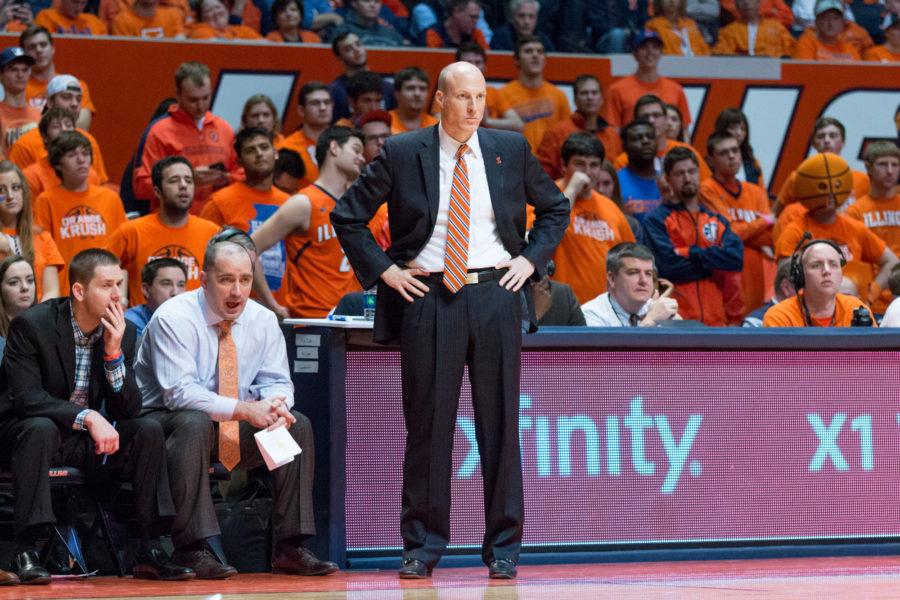 Illinois head coach John Groce watches his team from the sidelines during the game against Rutgers at the State Farm Center on February 17. The Illini won 82-66.

The Illinois basketball team will likely need to win its remaining four regular season games and snag at least two wins in the Big Ten tournament to even be considered for the consolation tournament.

Despite dropping two of three games in a one-week span, head coach John Groce said he likes the direction in which the Illini’s (12-15, 4-10 Big Ten) play is trending.

“We’ve had three games in a row now – our game in Evanston, our game at home on Tuesday against Rutgers and today’s game – where I think we’ve really started to turn the corner,” Groce said. “I see individuals getting better, (and) I think our team is getting better.”

The hiring of athletic director Josh Whitman last week was a much-needed pick-me-up during a basketball season mired in injury and lackluster play. Except the feeling didn’t last long amongst Illini fans. Less than 24 hours later, the team suffered another big blow when sophomore power forward Leron Black was arrested for allegedly pulling a knife on a bouncer at a Lil Durk concert on campus.

“It’s not a true reflection of what I’ve seen prior with (Black’s) character,” Groce said. “He’s been an outstanding young man to this point, and obviously, the decision or choice that he made the other night was a bad one. It’s a mistake.”

Illinois didn’t appear distracted on the court Sunday versus Wisconsin. The Illini lost 69-60 to the Badgers (17-10, 9-5 Big Ten), who have won eight of their last nine games.

Illinois played lock-down defense during the first half and led for the majority of the game, but the Badgers’ Nigel Hayes (17 points) and Ethan Happ (20 points, 12 rebounds, six steals) took over during the final 10 minutes of regulation.

Malcolm Hill (20 points, seven rebounds, two steals) and Kendrick Nunn (15 points) had strong outings per usual, but Illinois lacked contribution from several of its role players. After an outstanding four-game stretch during which he averaged 14.8 points and 5.8 rebounds, center Maverick Morgan struggled against Wisconsin in a four-point, six-rebound performance. He fouled out with 5:42 left in the second half.

“It’s hard for us right now with our (lack of) depth for Maverick Morgan to play seven minutes in the second half and get five fouls in seven minutes,” Groce said. “I thought that really hurt us.”

It’s no secret Hill and Nunn are Illinois’ premiere scorers at 18.6 and 16.4 points per game, respectively. They’ll need help in that department for Illinois to have any shot at running the table and somehow sneaking into the NIT.

With Indiana and Maryland upcoming, the co-captain guards will more than likely have to wait until their senior year to contend for meaningful post-season action.