Illinois basketball should be motivated when facing Indiana again 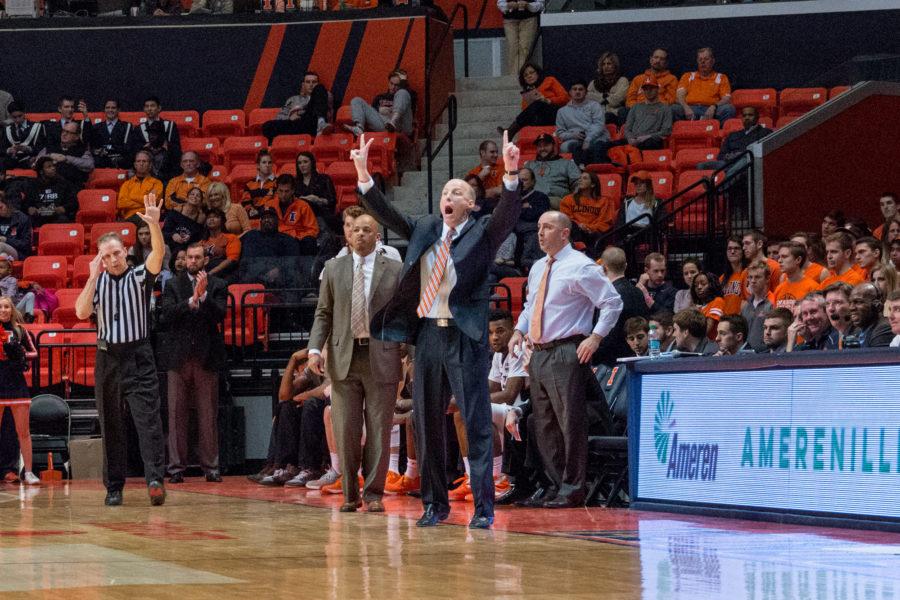 Illinois head coach John Groce calls out a play during the game against Rutgers at the State Farm Center on February 17. The Illini won 82-66.

Looking back years from now, this season of Illinois basketball will likely be seen as a low point in the program’s history.

At least, Illini fans should hope that a sub-.500 record with a gutted roster is as bad as it gets.

Regardless, this nightmare of a season has seen few highs and many lows, and even the worst season in recent memory must reach a nadir. It sure felt like that moment came in a 103-69 blowout loss at Indiana on Jan. 19.

Indiana has proven in the month since that debacle that it’s a legit team that is capable of dishing out 34-point blowouts to the worst teams in the conference. The Hoosiers visit Illinois for the rematch Thursday with a No. 18 ranking, a 22-6 overall record and a Big Ten mark of 12-3 that puts them atop the conference.

But it was the mood during and following that game — the worst loss in the John Groce era and the program’s worst loss in over 20 years — that made it seem like the season had bottomed out.

Indiana threw down dunk after dunk, fans unleashed their anger on social media and Groce questioned his team’s heart on the court before struggling for words at the postgame press conference.

That game was as lifeless as the Illini have looked all season, but the players have since proven that they haven’t quit on their coach. Thursday they have a chance to save some face.

The rematch should be a point of pride for Illini players who were humiliated on Indiana’s floor last month. Even through all the losses, this group has shown its capable of competing. It will be interesting to see if the Illini come at the Hoosiers with added motivation after being embarrassed on the road.

Indiana poses a terrible matchup for Illinois, which can be broken down quite simply: The Hoosiers have a fantastic offense, and the Illini have an atrocious defense. In a sport that determines a winner by who scores the most points, you can see why Indiana poses quite the problem.

Illinois falls in the bottom 15 percent of the country’s 351 teams in defending opponents’ effective field goal percentage. This discrepancy was painfully apparent in last month’s loss, when the Hoosiers torched the nets and the Illini looked on helplessly.

Indiana guard Robert Johnson will probably be out with an ankle injury, but the Hoosiers should be able to replace his 8.2 points per game elsewhere. Point guard Yogi Ferrell has tormented the Illini during his four-year career, and forward Troy Williams led all scorers with 21 points in the last matchup. Hoosier big men Thomas Bryant and Max Bielfeldt also pose major mismatches for Illinois’ front line.

In a game where so little stacks up favorably for the Illini, their best option is to try to force Indiana out of their comfort zone on offense and hope that the Hoosiers go cold from the field. Even if that happens, Illinois still has to shoot a high percentage to offset its terrible defense.

Basically, the Illini have to hope for a repeat of the Purdue game, when they shot over 50 percent from the field and Purdue looked flustered throughout.

Every team usually has a clunker or two throughout the Big Ten season where they drop a game they shouldn’t. Indiana fell at previously 2-8 Penn State on Feb. 6. Then-No. 6 Maryland became Minnesota’s first conference victim last week.

Illinois just has to hope Indiana has one more lackluster performance left in the tank.