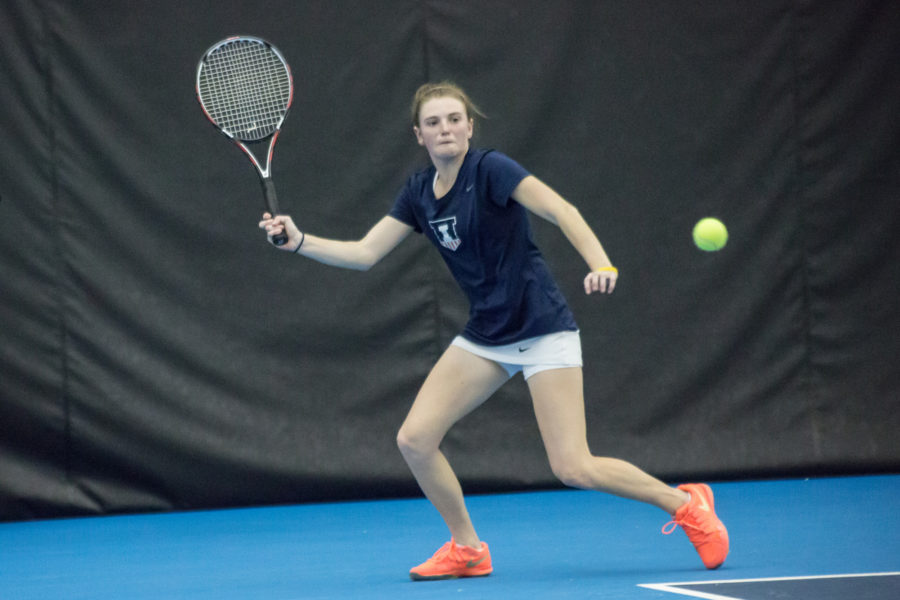 Illinois' Alexis Casati attempts to return the ball during the meet against DePaul at Atkins Tennis Center on Feb. 19, 2016. The Illini lost 3-4.

tweet: #Illini open up the Big Ten play with a state showdown against Northwestern

The Illini host the visiting Northwestern Wildcats at the Atkins Tennis Center on Friday. The Wildcats got the best of the in-state showdown twice last year, defeating the Illini in the regular season 6-1 and then again in Big Ten tournament 4-3.

Gutted after the close match, the Illini had a team meeting, and then had high-intensity practices on Saturday and Monday to start preparation for Northwestern.

“We had a good team meeting after the match and everybody was really happy with the way we played,” head coach Evan Clark said. “We were really disappointed with our result, but we had a great practice right after on Saturday. Intensity is way up and everyone’s holding themselves more accountable and treating it as wake up call if anything.”

Following a tough loss, the Illini will throw themselves into a difficult Big Ten schedule, with two Big Ten teams ranked in the top five in the nation: Michigan and Ohio State.

Although No. 53 Northwestern comes in with a 1-5 record, its schedule has been far from easy. All six teams they’ve competed against were ranked in the top 30 at the time of the match.

“Big Ten play is always really really important,” Clark said. “We take a lot of pride in the conference and obviously doing well in the conference is important. And we know we will have a really tough task on Friday night against Northwestern.”

With the Illini slipping in the rankings back seven slots to No. 59, the players know how important it is to work on improving for Friday’s matchup.

“There needs to be less light-heartedness in practice and we’re going to try to be a lot tougher,” junior captain Alexis Casati said. “Personally, I need to focus on match day itself and when the day comes just focus more and not let other things distract me.”

While the spring season has been up and down for the Illini, their doubles dominance has been constant and certainly a bright spot. Freshman Ines Vias and junior Louise Kwong have led the Illini from the No. 1 doubles spot.

“This week I’m working on my mental game, I’m just trying to stay strong mentally,” Vias said. “We have a lot of opportunities to play top teams like Northwestern so this could be a huge win for us.”