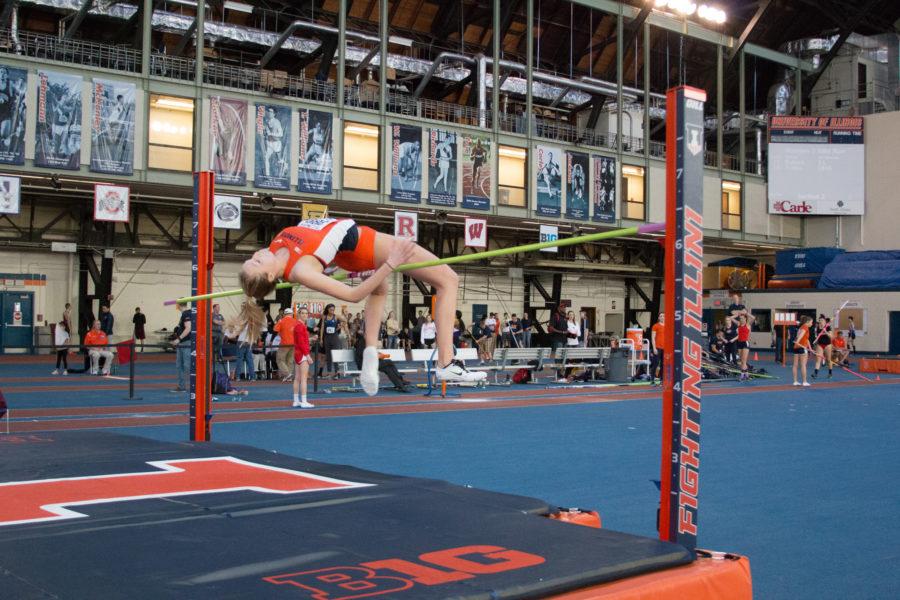 Tweet: Three members of the [email protected] team looking to make a statement this weekend at the B1G indoor championships.

Junior Kandie Bloch-Jones is looking to make a statement for the Illinois women’s track team this weekend.

The Illini high jumper is looking forward to the chance to shine at the Big Ten Championships in Geneva, Ohio.

Bloch-Jones is one of three high jumpers in the Big Ten to clear 1.83 meters this year. At the Orange and Blue Open this past weekend, she attempted the school record of 1.87 meters, but couldn’t make the jump. She’s planning to try again if she can clear 1.85 meters first.

One person who believes in Bloch-Jones is head coach Ron Garner.

“It’s definitely within her range,” Garner said. “It’s a matter of time, she just has to continue to come out and execute … at the lower heights, she’s jumped high enough, it’s just getting it timed up right.”

Garner says that while the Illini won’t be competing in every event, he wants them to be as competitive as possible in the events they will be a part of. He said he wants the team to use this tournament to gain valuable experience that he hopes will translate to more success in the outdoor season.

“We are going to be better, and keep improving,” he said, “We want to make sure that what we are doing indoors now we’ll be able to build on and utilize in outdoors.”

Another Illini athlete looking to take home a title in her event is junior Nicole Choquette. Garner did not run Choquette at the Orange and Blue Open so that she can rest up to try and defender her Big Ten title in the 600.

Choquette’s best time on the season stands at 1 minute, 29 seconds, the second-best time in the Big Ten. Her biggest rival in the event is Minnesota’s Titania Markland, whose time of 1:28:51 was just enough to beat out Choquette at the Meyo Invitational earlier this February.

After matching her personal best time of 8.27 seconds in the 60-meter hurdles last weekend, sophomore Pedrya Seymour will be hoping to improve on that time this weekend.

“My goal is to PR and I know that if I PR I’ll be able to at least medal and make it to the finals.” She said.

Her current time places her fourth in the Big Ten, but she is only 0.01 seconds behind the third place spot. However, she knows that this doesn’t guarantee her a spot in the finals.

“I would say that my biggest competition is everyone.” Seymour said. “At the Big Tens, people regroup and come back with their best performances.”