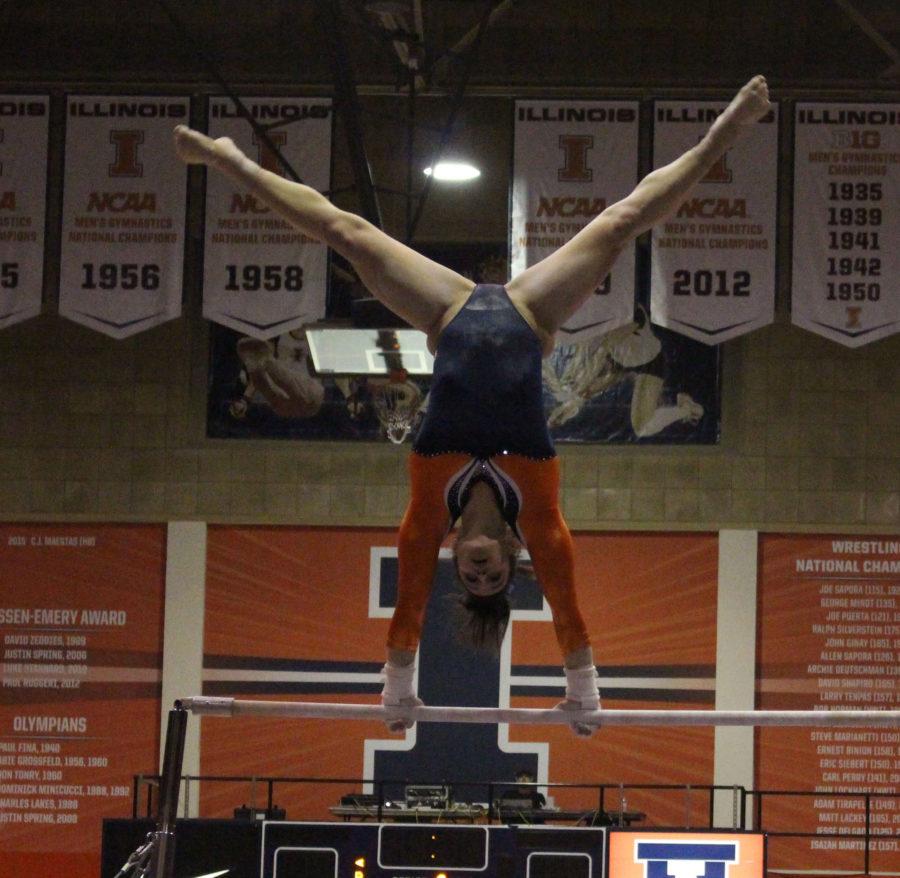 Before the season began, the Fighting Illini video staff came up with the idea to have the gymnasts choreograph their own routines and lip-sync to popular songs.

In order to create some friendly competition and get the fans involved, they posted the videos on social media to decide who would win each round by voting on the team’s Facebook, Twitter and Youtube accounts.

The gymnasts had some mixed feelings about the idea because they’d never done it before and they ran the risk of embarrassing themselves. Freshman Lizzy LeDuc,CH however, was on board for the challenge from the start.

“I watched videos of lip-sync battles before and I always thought they were super funny,” LeDuc said.

With the idea in place, they began putting it all together during the preseason. Lines were drawn as the gymnasts began the process by pulling names out of a hat to pick their dancing partners.

Song selection was the first decision for the pairs. Each team had to pick three songs — anything was on the table. This led to song selections ranging from Grease’s “You’re the One That I Want” to Fergie’s hit, “Fergalicious.”

The gymnasts then focused their efforts on an area that is quite familiar to them — choreography. The pairs got together in their free time and made routines to go with each of their songs.

When the songs, the dancing and the lip-syncing all put together, the gymnasts were ready to document their efforts on the internet for fans’ viewing pleasure.

“Making the videos was really fun,” said senior Giana O’Connor. “I thought it was going to be more embarrassing than it actually was but the fans seem to enjoy it.”

On a cold preseason day, the girls huddled into the Kenny Gym Annex where they normally run practice, but the goal that day was not sticking landings. With a camera and some props, the filming began. Through the day, each of the seven pairs filmed their videos, ending the day with 21 videos.

“We came in and everyone had their props and they had dances they created,” senior Sunny Kato said. “We had a lot of fun with it as a team.”

Since filming, the Fighting Illini video staff has been matching up the pairs and posting the videos online where fans could vote. Round by round, the gymnasts showed their dancing skills, from Rachael Donovan and Julia Hutcherson’s rendition of “Fabulous” from High School Musical 2, to Mary Jane Horth and Heather Foley’s routine to Adele’s “Hello.”CH

Weeks later, with the team mid-season, the competition reached its final round. A large following of fans turned out to vote throughout the competition, which eventually led to crowning O’Connor and LeDuc as the winners.

The LipSync Challenge worked as a way both for the team to bond before the season began as well as for the fans to stay involved with the team throughout the season.

“I think it was a great activity,” assistant coach Chad Wiest said. “It got them together and they had a lot of fun; just kind of a goofy team bonding experience that brings them together as a team.”