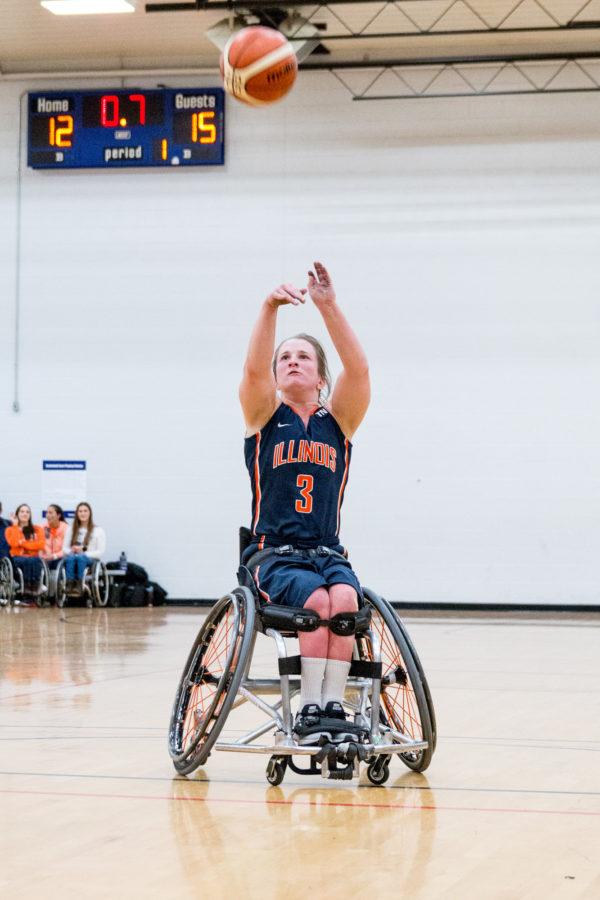 Illinois’ Gail Gaeng takes a free throw during the game against Alabama at the Activities and Recreation Center on February 12. The Illini won 56-47.

The Illinois wheelchair basketball teams will travel to Tuscaloosa, AL, to play in their final regular season tournament of the season.

The Illini have been playing well lately, including some particularly strong play from the women’s team.

The Illinois women’s team is heading into the tournament after going 7-1 in their last eight games. Head coach Stephanie Wheeler said that the team is really clicking, and the team’s leaders have been phenomenal.

“We have really played well as a team lately,” Wheeler said. “The important thing for us right now is consistency and continuing to play as a team. When we all play our roles and work together I think we can win any game.”

Wheeler said she has really liked the way her team has learned to play together and with so much confidence. She said that when the Illini play like they have recently, they are a “hard team to beat.”

Though they are still trying to win every game they can this weekend, the women do not have much to gain or lose in this tournament. Unless they don’t win a game, the Illini are set pretty firmly to be the first seed in the national tournament.

“We are lucky to be in the position that we can go into this tournament without much pressure,” Wheeler said. “If we win all four, it’s a lock that we would be the first seed, but even if we lost all of our games the lowest we could drop is to second.”

The men will also be looking to finish strong before they attempt to make their own run at nationals.

“Defense is still definitely ging to be our biggest focus,” Buchi said. “We have had really good offensive opportunities it is just a matter of time before the shots start dropping. Defensively we still have a lot of room to improve. It’s been our big emphasis all season and if we can put it together we should succeed.”

Offensively, the Illini will continue to rely on heavy production from guards Ryan Neiswender and Spencer Heslop.

In recent tournaments the two have carried the team offensively, and if they can continue to do so the Illini will be in good shape.

Following this tournament, both teams will have played in eight tournaments, and will play in their final tournament of the year for nationals at Edinboro University.

The teams have high expectations, and believe that a national championship is a possibility for both sides.