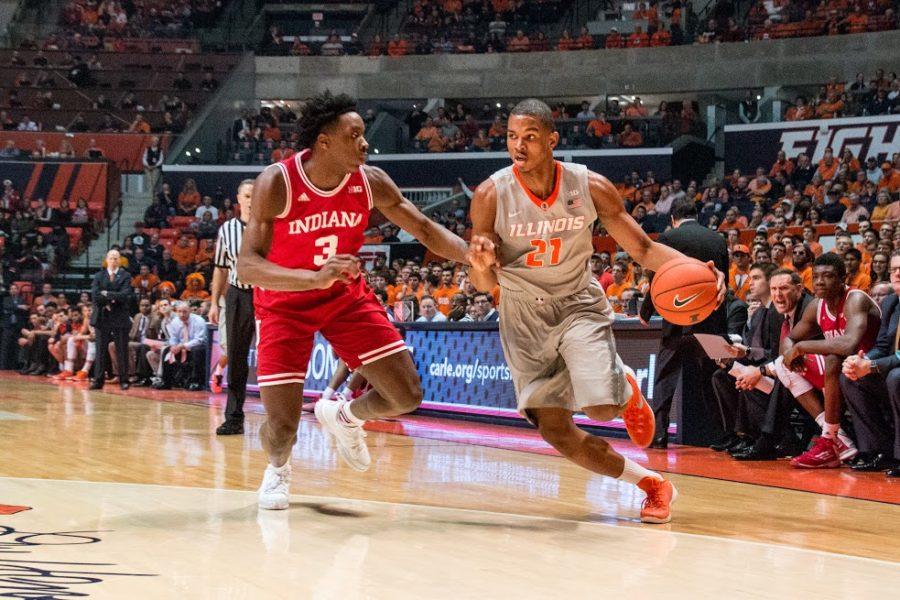 Illinois’ Malcolm Hill drives to the basket during the game against Indiana at the State Farm Center. The Hoosiers held Hill to just 5 points.

Tweet: It was a condensed version of their first matchup as IU routed Illinois again, 74-47, behind a second-half scoring outburst

For a half, Illinois battled.

Stop me if you can guess what happened next.

Illinois jumped out to a 14-4 lead over No. 18 Indiana and took a 28-27 lead into halftime before it all fell apart Thursday at State Farm Center. Indiana exploded out of the break on an 18-5 run, raining threes as they pulled away in what seemed like the blink of an eye for a 74-47 win.

Senior point guard Yogi Ferrell led the aerial assault, nailing two threes in the first six minutes of the second half after going 0-4 from deep in the first. He didn’t cool down, splashing five more triples for Indiana (23-6, 13-3) before the game was over.

Ferrell finished with a game-high 27 points, twisting the knife in Illinois (12-16, 4-11) again for what was likely the final time in a spectacular four-year career.

“I’ve got great admiration for him,” Illinois head coach John Groce said of Ferrell after the game. “That’s what leadership looks like to me.”

The Hoosiers’ senior leader led the second-half barrage, but it was their freshman phenom who who got it started. Six-foot-ten center Thomas Bryant ignited Indiana’s scoring burst with seven straight points to open the frame, drawing enough attention in the paint to free up the perimeter for Ferrell and company. Bryant ended the evening with 14 points and eight rebounds

By the time the Hoosiers pushed their lead to 72-44 with two minutes to play, most Illini fans had retreated to the exits as a sizeable showing of Indiana fans hung around to celebrate.

This felt like someone found the tape of the first matchup between the two teams — when Indiana thrashed Illinois 103-69 in Bloomington — and hit fast forward. The Illini were competitive for about 10 minutes longer in the rematch, but Indiana simply sped up their bombardment. The Hoosiers converted 10-of-17 threes in the second half, shrugging off a 3-of-15 start from deep.

We’ve seen Illinois follow the same path over and over again this year against any decent team, especially at home. The Illini will start the game relatively hot, feed off the crowd’s energy and jump out to an early lead. An offensive lull usually follows as their opponent eases back into the game, and Illinois eventually fades for good in the second half.

Groce is coaching with one hand tied behind his back with a litany of injuries plaguing his roster, but opposing Big Ten coaches are dismantling his schemes with ease at this point. Illinois looks good for the first few minutes of these games because they go through a handful of pre-determined offensive sets and execute them reasonably well. But when the advanced scouting catches up with them, the Illini tend to look completely stagnant and lost.

There’s just too much standing around, too many contested shots and not enough healthy talent.

Indiana isn’t a great defensive team, but it had Illinois figured out Thursday. The Hoosiers used their length to stifle Malcolm Hill, especially when the Illini’s best player was running the show at point. Hill couldn’t facilitate the offense and he couldn’t get his shot off, going 2-for-7 from the field as he finished with just five points. Hill didn’t record his first bucket until 7:30 remained in the game, falling well short of his 18.6 points per game season average.

When Kendrick Nunn and Hill combine for just 13 points, Illinois isn’t beating anybody.

The only Illini to have a true impact was freshman and Indiana native Jalen Coleman-Lands. The former Indiana recruit started the game hot and was solid all game, hitting 7-of-13 shots to complete a 21-point effort. JCL continues to look better in the flow of the offense and more comfortable putting the ball on the floor with each passing game, which is the one thing Illini fans can take solace in after Indiana clowned its downtrodden rivals again. At least the Hoosiers will have to deal with Coleman-Lands for three more years while knowing he escaped their backyard.

Besides that, there wasn’t anything to cheer about if you’re an Illini fan. Nice first halves don’t mean much when you get your doors blown off in the second, and it’s been a constant theme for this Illinois team this season. After jumping out to that 14-4 lead early, Indiana out-scored Illinois by a ridiculous 70-33 margin.

You just can’t let this Indiana team start playing downhill, and Illinois did exactly that.