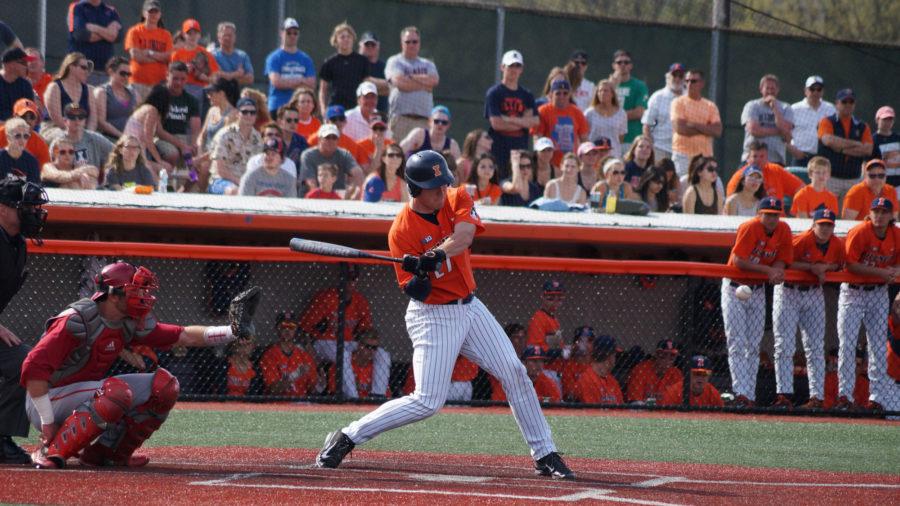 Illinois’ Pat Mclnerney (27) takes a swing at the ball during the baseball game v. Indiana at Illinois Field on Saturday, Apr. 18, 2015. Illinois won 6-3.

The Illinois baseball team went through a bit of déjà vu when
it picked up its third straight victory on Saturdy against Florida Gulf Coast.

The Illini’s (3-2) second game of a three-game series
against the Eagles (1-5) showed a lot of similarities to Friday’s matchup.

Catcher Jason Goldstein put the Illini on the board early,
knocking in Adam Walton with a single in the top of the first. In five games,
Goldstein is 10-for-22 and has three RBIs so far this season. He leads the Illini in both
categories.

Head coach Dan Hartleb expected that kind of play from his
veteran leader.

“Jason is a mature player,” Hartleb said. “He has been through
a lot of different situations, and I expect him to play at a high level and have
quality at bats. He did a great job today.”

The early lead gave sophomore Doug Hayes a cushion before he
even took the mound for the second start of his career.

He didn’t need much of
a cushion.

The lefty went after the Eagles all day, giving up only one run on five hits in six innings. He struck out four and picked up
the first win of his collegiate career.

Hartleb said the key to Hayes’ success on Saturday was
getting ahead of batters early.

“I thought Hayes did a great job,” Hartleb said. “He had
command early. He really pounded the zone and got ahead in the count early. He
just attacked hitters today.”

Hayes delivered the Illini’s second quality start of the
weekend. Junior Cody Sedlock posted nearly identical numbers for the Illini on
Friday night, giving up two runs in one more inning of work. Hayes, like
Sedlock, left his bullpen in a good position when he handed the ball over to
Hartleb at the end of the sixth inning.

The Eagles scored in their first run in the bottom of the
fourth, but the Illini bats did not wait long to take the lead back. Junior Anthony
Drago singled through the left side in the top of the fifth, scoring Goldstein
and giving the Illini the lead for good.

The Illini tacked on two more runs before the game was over.
In the top of the sixth, Junior Matthew James hit the first Illini home run of the
season over the right field wall. Then, in the eighth, freshman Jack Yalowitz
snuck one through the middle to score freshman Doran Turchin, the Illini the 4-1 lead.

Unlike Friday, Hartleb waited before bringing out one his
veteran relievers, electing instead to bring in freshman Cole Belair.

It was
Bellair’s second appearance for the Illini, but he pitched like he had been in the situation many times before.

Belair pitched two innings without giving
up a hit and struck out three batters along the way. The only blemish on his performance
was a walk.

It was a very similar performance to senior J.D. Nielsen’s
dominant outing last night, when Nielsen pitched two innings and gave up one hit.

After Bellair finished his second inning, Hartleb brought
out senior Nick Blackburn in the bottom of the ninth for the save opportunity.

Blackburn gave up one run in the final frame before closing
out the Eagles for his second save of his season, and giving the Illini the 2-0
lead in the series.

Illinois will go for the series sweep against Florida Gulf
Coast tomorrow.