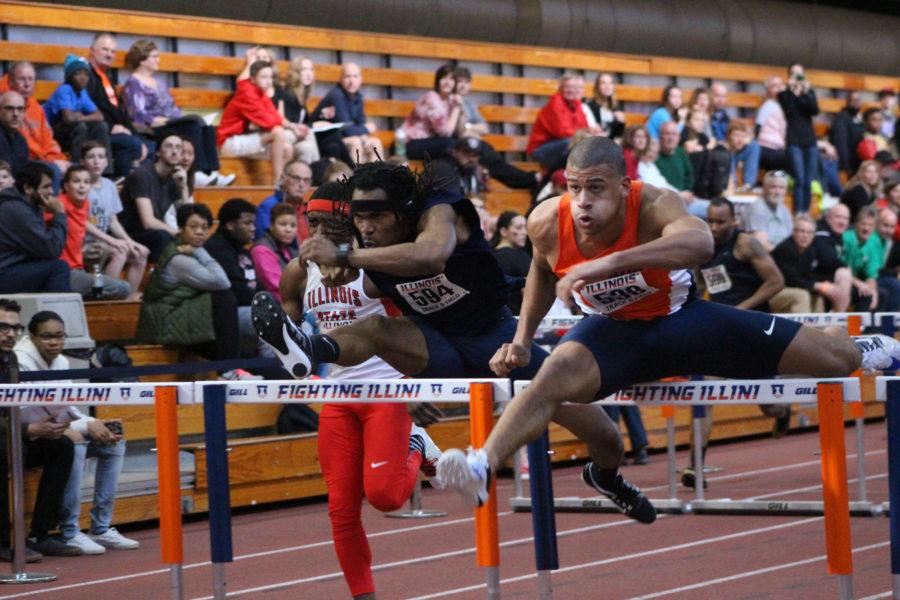 Illinois’ Cam Viney jumps over a hurdle in the Orange and Blue meet at the Armory on Saturday, Feb. 20, 2016

The entire Illinois men’s track indoor season was defined by injuries as the Illini traveled from meet to meet with no consistent team success.

Athletes like Dylan Lafond, Jonathan Wells and Cam Viney regularly put together strong performances, but more often than not, the rest of the team didn’t offer enough support to translate these strong personal performances to team-wide success.

The Big Ten Championships was a fitting finishing to the season. Wells, Lafond and Viney led the way as a depleted Illinois capped off its indoor season with a 10th place finish in Geneva, Ohio. The Illini finished second in the conference at the indoor championships last year and was best in the Big Ten at the outdoor meet in the spring.

“We don’t feel like it is reflective of who we are or what we can do,” head coach Mike Turk said. “The team that we brought there put out everything they had. We were just outmanned.”

The second day of competition, however, did not bode as well for the Illini. They quickly plummeted down the standings. Devin Quinn and Wells scored points for the Illini with two top-eight finishes.

He managed to place fourth in the event, though, and will likely compete at nationals.

“Overall, I still feel like we have a lot in the high jump,” Wells said. “I’m sure we can put up a good mark at nationals.”

Illinois performed the strongest as a team in its distance events. Lafond and the distance medley relay team each took second place, scoring the most points for the Illini.

Even distance faltered though. Lafond failed to have as much of an impact in the 5,000 meters as he did in the 3,000 and Garrett Lee, who had set a personal best in the mile on the first day, failed to score any points in the finals for an event.

Turk, who’s needed athletes to participate in more events than usual because of a depleted roster, attributes some of these shortcomings to fatigue.

“When you roll the dice and go for big things, sometimes you fall short,” Turk said. “ What we got was pretty good, but we certainly would have liked to do more.”

The lackluster finish puts a cap on Illinois indoor team season, but some athletes who advance as individuals such as Lafond, Viney and Wells. While those athletes chase personal goals, the rest of the team will focus on getting healthy and ready for the outdoor season.

The indoor national championships are on March 11-12 in Birmingham, Alabama. The Illini’s outdoor season starts on March 26 at the SIU Bill Cornell Invite in Carbondale, Illinois.