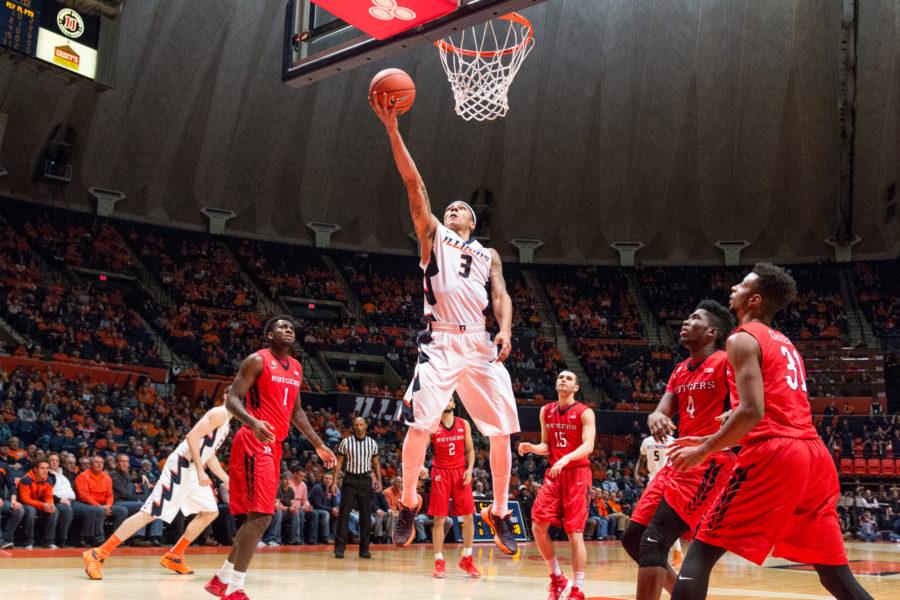 Illinois’ Khalid Lewis takes a layup during the game against Rutgers at the State Farm Center on February 17. The Illini won 82-66.

When it was known by a different name, State Farm Center was a hall of doom for opponents.

Teams feared visiting the old Assembly Hall in Champaign, where Illinois basketball once had a 33-game home winning streak in the mid-2000s. The home dominance began to crumble at the end of the 2000s, and since Assembly Hall was renamed State Farm Center in 2013, the Illini have a 12-14 Big Ten home record, including a 2-6 mark this season.

Illinois might improve that Sunday in their home finale against Minnesota, but the result won’t reverse the downward spiral that has made State Farm Center a place where opponents now know they can likely steal one on the road.

The ongoing State Farm Center renovation was pushed through partly because head coach John Groce sold fans and donors during his first season on the belief that the project was worth backing; that he would have the Illini program back on top sooner than later.

Since making the NCAA tournament following a thrilling first season, that optimism has faded before bottoming out during a dreadful and soon-to-be over 2015-16 campaign.

I can’t see Groce losing his job over what will be his first losing season at Illinois due to an unprecedented plague of injuries, but the vanishing home court advantage will be one of the things he’ll have to answer for when he sits down with new athletic director Josh Whitman at the end of the season.

If the Illini beat Minnesota Sunday — and they better beat the Gophers at home — Groce will be 42-19 on the State Farm Center floor in four seasons. That simply isn’t good enough.

It will be a strange Senior Night Sunday when Illinois honors three players in its annual send-off ceremony. It’s hard to blame fans for not getting too emotionally worked up to bid farewell to Khalid Lewis, Mike Thorne Jr. and Mike LaTulip.

Lewis and Thorne have only spent one season at Illinois as graduate transfers, and Thorne never even played a game at State Farm Center due to injury.

LaTulip will get the loudest cheers as a crowd favorite, but he played sparingly over three seasons as a walk-on.

Sunday might not be farewell for Thorne after all, as Groce announced Saturday that the team would pursue a medical hardship waiver for the 6-foot-11 big man after he was only able to play in eight games this season due to a meniscus injury.

Thorne falls under the NCAA’s minimum games played mandate to qualify for the waiver and an additional season, but his appearance in the second half of this season in a lone January game at Indiana might end up disqualifying him from consideration.

Groce said that Thorne has a unique case and is still hopeful about bringing his center back next season, but it would be a shame if that one game against Indiana — when Thorne was still hobbling and noticeably heavier than his pre-injury form — ultimately costs him a chance at another year. Illinois could certainly use him.

At 8-19, the Gophers are having a worse season than Illinois, but visit State Farm Center on Sunday on a two-game win streak.

They took down No. 6 Maryland at The Barn before a blowout win over Rutgers on Tuesday, so you know head coach Richard Pitino has his team confident they can beat an Illini squad that barely topped them in overtime last month. Illinois was lucky to win that first matchup, mounting a last-minute, five-point comeback in regulation before rolling the Gophers in OT.

After Minnesota’s victory over Maryland last week, Gopher senior Joey King gave a tearful postgame TV interview. King is Minnesota’s second-leading scorer at 11.6 points per game and is the team’s senior leader, and it was a moving moment seeing him overcome with emotion after the Gophers’ biggest win in a lost season.

Those kinds of moments remind you that losing sucks for the players as well as the fans, and that losing seasons like what Minnesota and Illinois are going through takes its toll on the college athletes playing them out.

That’s why it would be nice to see these Illini players do what you’re supposed to do on Senior Night by drawing the curtain on the arena with a win.