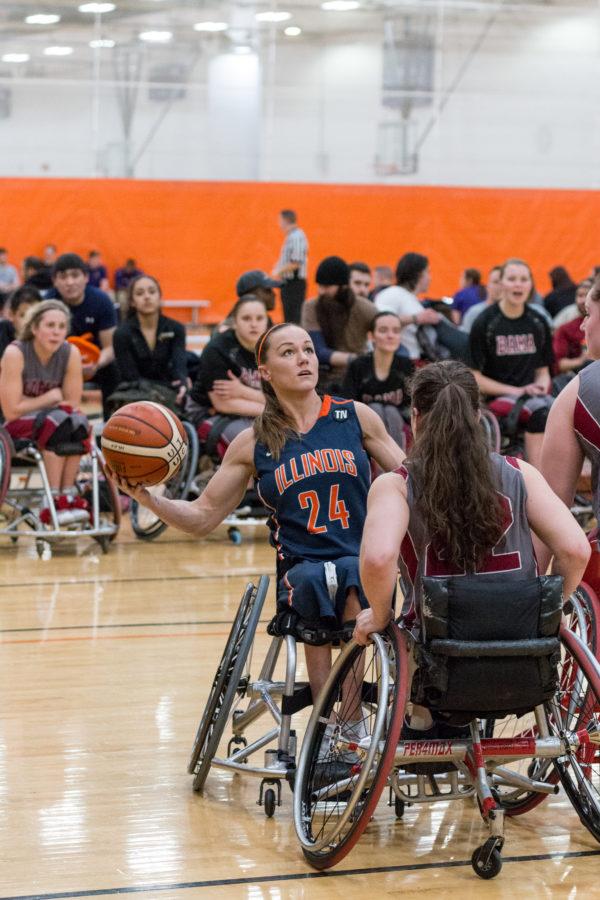 Illinois’ Megan Blunk gets ready to take a shot during the game against Alabama at the Activities and Recreation Center on Feb. 12. The Illini won 56-47.

Over the weekend, the Illinois wheelchair basketball teams capped off their respective seasons.

The teams traveled to Tuscaloosa, Alabama, in order to play in three final games each before heading to Edinboro for nationals.SO

The women went 2-1, and the men fell late in its final matchup with Alabama to finish 1-2.SO

For the women, the tournament did not present them with much pressure. By winning two out of three, the team have secured the top seed in the national tournament.SO

Though it wasn’t necessarily a goal for the Illini, women’s head coach Stephanie Wheeler said being the top seed would be nice.

In the tournament the Illini squared off against familiar foes Texas-Arlington and Alabama, before playing the University of Arizona in their final game of the weekend.SO

In their first game, the Illini took their only loss of the weekend; falling 60-51 to the University of Texas-Arlington.SO Senior Gail Gaeng put up a strong effort, scoring 28 points, and adding eight rebounds and four assists.SO Despite her contributions, her USA Paralympic teammate Rose Hollermann led the Mavericks to victory behind her 32 points, three rebounds and two assists.SO

Following the loss, the Illini bounced back strong to beat the hosting Crimson Tide 58-49.SO Gaeng had another big game with 21 points, 10 assists and eight rebounds. Forward Kendra Zeman also had a big game, chipping in a double-double of her own with 21 points and 12 rebounds. Alabama’s Arinn Young scored 25 points of her own to keep her team in the game.SO

Although it also did not have any huge tournament implications, the men’s wheelchair basketball team looked to pick up a couple wins before they began final preparations for nationals.

In their first game the Illini struggled to contain Texas-Arlington big man Jan Gans. The German forward scored 30 points, and also nine rebounds and five assists. On the other end, Illinois’ Spencer Heslop was unaffected by the defense, contributing 19 points of his own.SO

In game two, the Illini rebounded nicely from the tough loss to Texas-Arlington. They beat Auburn 51-41 behind a strong all-around team effort. Heslop chipped in another 17 points, Ryan Neiswender collected 11 assists, and forward Mak Nong contributed 13 points and six rebounds of his own.SO

The season finale was a tough one for the Illini, who dropped a 62-50 game to Alabama. There are no statistics due to technical issues, but the Illini were competitive for a majority of the game. They trailed by one point at halftime, but were unable to keep up in the closing minutes.SO

With the regular season now over, the Illini will have a quick turnaround as they begin their final preparations for nationals.

Both teams now have nine days until the tournament begins, and both teams will begin the final legs of their quests for a national championship on March 9.SO