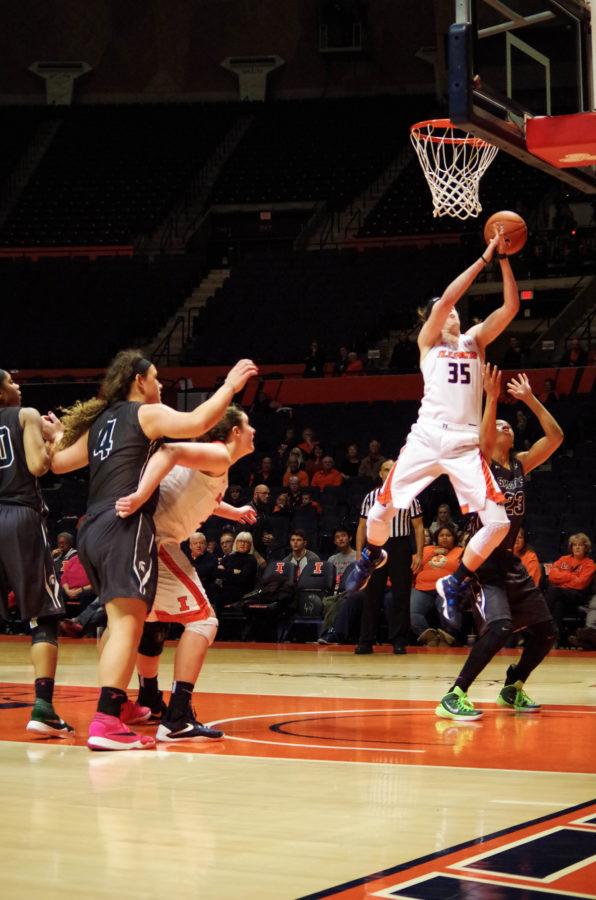 All eyes are on Illinois' Alex Wittinger (35), as she goes up for the layup at the game against Michigan State at State Farm Center on Wednesday, Feb. 24th, 2016. The Illini lost 43-71.

The Illinois women’s basketball team is getting a clean slate.

After finishing off the regular season last in the conference, the Illini find themselves as the 14-seed in this year’s Big Ten tournament in Indianapolis.

“It’s 0-0,” head coach Matt Bollant said. “Everybody gets to start over and go into the postseason. It’s a new season so there’s some excitement there.”

But in order to be successful in this “new season,” Bollant has noted takeaways from Illinois’ 65-56 loss to Penn State in January — its only regular season matchup against the Nittany Lions.

Illinois ended the third quarter of that game with a 40-38 lead, but struggled to make shots in the final quarter. Penn State’s Teniya Page dominated the Illini, going for 27 points.

“A lot of times last game we didn’t get the ball inside much because our post didn’t step slide,” Bollant said. “I think our guards have gotten better at passing, but we want to work inside-out against the zone.”

With eight games left in the season, Illinois freshman forward Alex Wittinger broke her right thumb and tore a ligament in her left thumb.

Both were separate injuries that occurred in practice.

Wittinger’s scoring has been inconsistent during her recovery, but she has made her defensive presence felt, averaging about two blocks a game in Illinois’ last six games.

With Wittinger trying to find her old groove, the Illini have relied on their two leading scorers in conference games, center Chatrice White and guard Kyley Simmons. White is averaging 18 points and nine rebounds per game and Simmons is averaging about 12 points and three assists per game.

“We’re at our best when (White) is getting touches inside and scoring,” Bollant said. “When she’s bringing energy to our team we’re at our best. It’s a challenge for her to do that from the start and see if she can play a complete game.”

As the No. 14 seed, Illinois will have to win four games to make it to Sunday’s championship. If the Illini beat Penn State, they will have to play against No. 6-seeded Purdue, No.3 -seeded Michigan State and most likely the two-seed Ohio State.

White is optimistic about the challenge Illinois is facing.

“Nobody cares about your record anymore,” White said. “In the Big Ten, anyone can win on any night.”