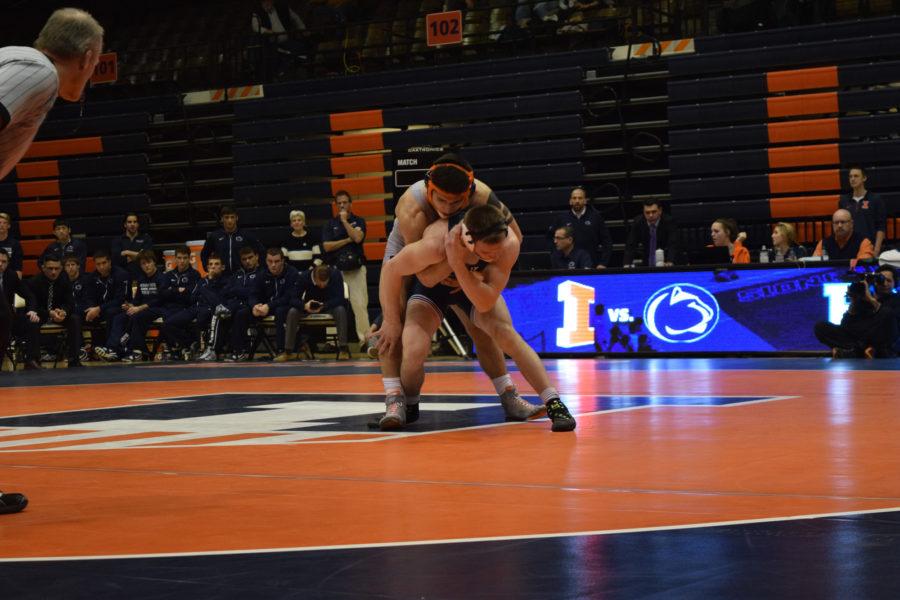 The Big Ten Wrestling Championships begin Saturday, and Illinois is going into Iowa City, looking to capture its first title in 11 years.

The Illini finished the regular season with a 4-5 conference record, good for eighth place in the Big Ten.

The last time the Big Ten Championship took place in Iowa City was in 2004-2005 — the same year the Illini last won the title. Coincidentally, Illinois defeated Northwestern and Minnesota in its final two duals of the regular season in 2005, just as it did this season.

Penn State tops the conference with four No. 1 seeds in the individual tournament. Michigan and Ohio State each have two, and the Illini and Wisconsin have one apiece. The Nittany Lions tied Iowa at 9-0 for the team regular-season conference title.

Six Illini have secured seeds for the tournament, highlighted by Zane Richards’ No. 1 seed at 133 pounds.

But the path to the Carver-Hawkeyes arena hasn’t been an entirely smooth one.

Illinois has dealt with their fair share of injuries: Starters Richards, Zac Brunson and Caleb Ervin have all missed time throughout the course of the season.

The Illini started off the Big Ten slate with a dual against the defending co-Big Ten champion and NCAA champion Ohio State Buckeyes.

Illinois was without Brunson at 174 pounds and lost by five points, 22-17.

After another loss at home against Iowa and at Michigan, Illinois found itself at 0-3 in the conference, with the schedule not getting much easier.

The Illini picked up their first win in East Lansing, Michigan, against Michigan State, 32-10, in Brunson’s return match.

With losses to Penn State at home and Nebraska on the road, the Illini looked to end the season strong entering postseason competition.

Illinois won three out of its last four matches, including a win over Minnesota at Huff Hall — a team the Illini hadn’t defeated since the 2004-05 championship campaign.

Even though the Big Ten regular season did not go as planned, the Illini received strong individual performances.

Both Zane Richards and Brunson had great seasons to complement Isaiah Martinez’s one-loss campaign at 157 pounds.

Richards finished with an undefeated record and a No. 2 ranking at his weight class, while Brunson finished with two defeats and landed at No. 6.

Martinez said he’s looking forward to a rematch with his overthrower and the new No. 1 wrestler at 157 pounds, Penn State’s Jason Nolf.

Martinez stills feels the effects of the loss.