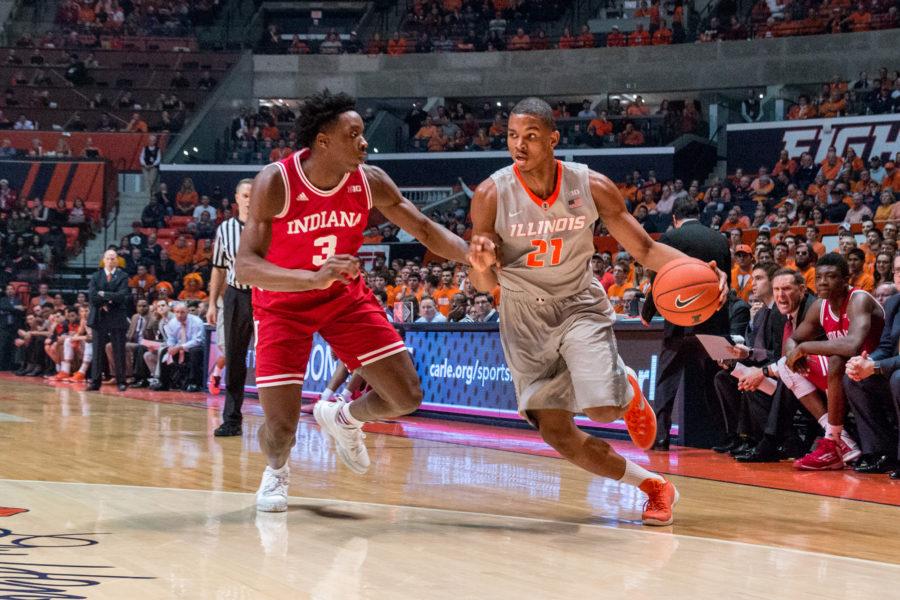 Illinois’ Malcolm Hill dribbles around Indiana’s OG Anunoby during the game against Indiana at the State Farm Center on February 25. The Illini lost 74-47.

With leading scorer Rayvonte Rice out due to a broken hand, Hill, a sophomore at the time, had his coming-out party as an Illini. He had everything going on offense — midrange jumpers, 3-pointers, finishes at the rim — and Maryland had no answer.

“Their size, their athleticism on the defensive end reminds me a lot of Purdue,” Groce said. “They’re just enormous. They affect two-point field goal percentage at that size, and they’re a great shot-blocking team.”

But the Illini will also have to contain the Terps’ talented backcourt, led by lightning-quick point guard, Melo Trimble (14.2 PPG, 5.2 APG, 3.3 RPG).jo

“Obviously, they have a very dominant and gifted point guard (in Trimble),” Groce said. “And their two-guard, Rasheed Sulaiman, who transferred from Duke, has really made an impact on their team, a prolific scorer.”

Though Maryland boasts a 15-1 home record, Trimble and the Terps have cooled off as of lately. UMD has lost three of its last four games, and Trimble has committed a whopping 19 turnovers over that stretch.

Hill and fellow guard Kendrick Nunn collected four steals apiece in Sunday night’s 84-71 victory over Minnesota, and Illinois translated several of those takeaways into fastbreak points in the second half. The junior co-captains will look to keep the pressure on in Thursday’s game.jo

“In the second half against Minnesota, our energy level, our inspiring effort, our attention to detail, our pace – all those things were just really good,” Groce said. “We’ve got to build on that. (On Monday), we might’ve had our best practice of the year.”

Hill was somewhat unknown to the rest of the country early in his sophomore season. But after pouring in 28 points and leading Illinois over nationally ranked Maryland, opposing teams began to take notice of the 6-foot-6, Fairview Heights native.

This is Hill’s team, and Maryland head coach Mark Turgeon will try everything he can to stop the Big Ten’s third-leading scorer. UMD is once again the prohibitive favorite, but no Terrapin player has had as complete of a season as Hill.