Softball looking for offense boost at Under Amour Invitational 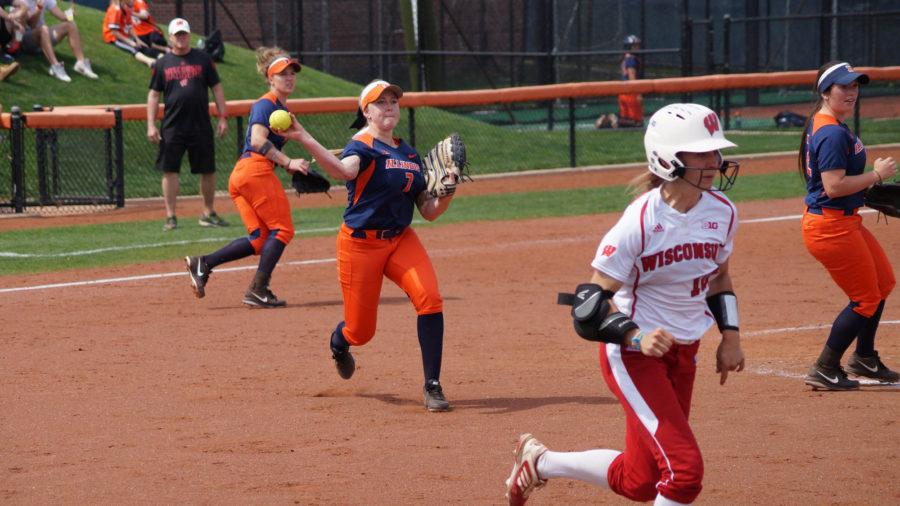 Illinois’ Jade Vecvanags (7) throws the ball to first base during the softball game v. Wisconsin at Eichelberger Field on Saturday, Apr. 18, 2015. Illinois won 5-3.

The Illini softball team has played like two different teams this season.

One team has a few signature victories under its belt and a mixture of strong pitching and a potent offense.

The other team has some lopsided losses, coupled with mental lapses on the field and quiet bats.

Time will tell which team takes the field at this weekend’s Under Armour Invitational hosted by South Florida in Tampa, Florida.

“It’s got to be a team effort,” Perry said. “We have a lot of young ladies who have performed well for us this year, but I believe our x-factor is when we are all fighting together. That translates to solid defense, which helps our pitchers, and transitions that momentum on offense.”

“Our 3-2 record wasn’t bad considering the competition,” Perry said. “Texas has a great program with great history, and so does Tulsa. They’ve been in the postseason for many years now. Heading in, we knew what we were facing, and we aimed for 5-0. We got 3-2 which is acceptable.”

The 3-2 weekend brought Illinois to 8-6 on the season, a three-win improvement to where it was at this time last season.

Last year’s Under Armour Invitational ended after three games for the Illini — the last two games were cancelled as a result of poor weather.

Last season, Illinois finished 2-1 in the tournament. Host South Florida was the only team to beat the Illini, handing them a 5-2 loss.

Junior ace Jade Vecvanags is slated to start three of the team’s five games. Vecvanags leads the Illini in ERA, win-loss record, complete games, shutouts and strikeouts. Her 29 strikeouts are more than double the number of Breanna Wonderly, the team’s No. 2 pitcher, who has 10.

“Jade led us in the circle and did an excellent job of making her pitches last week,” Perry said. “The umpire had a pretty tight zone and she overcame that as well, which I think is huge for her moving forward.”

Outside of host South Florida, the Illini will square off against Sam Houston State, Central Michigan, East Carolina and the University of Pennsylvania.

East Carolina (11-6) has the best record among the teams and is 8-2 over its last 10 games. The Illini faced the Pirates in last season’s Invitational and recorded a 7-6 win.