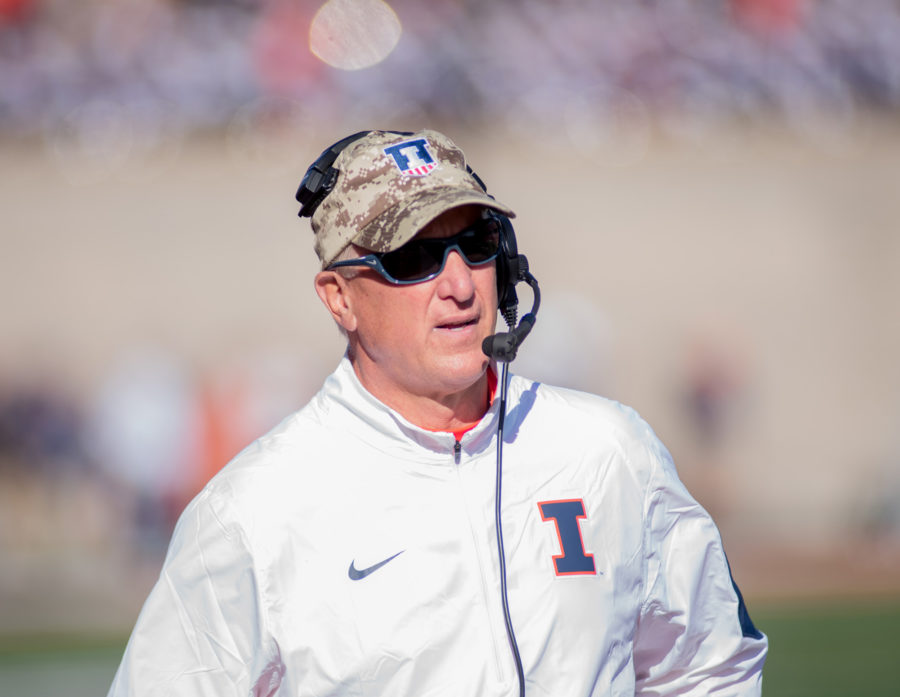 Interim head coach Bill Cubit looks looks on from the sidelines during the game against Ohio State at Memorial Stadium on Saturday, Nov. 14. Illinois lost 28-3.

The move comes on Whitman’s first day on the job as athletic director. In a press release, Whitman expressed his desire for stability within the football program.

“I appreciate the leadership that Bill Cubit provided our football program during what has been, unquestionably, a very tumultuous time,” Whitman said in the release. “He accepted the challenge on an interim basis under incredibly difficult and unusual circumstances, and he has continued to work diligently for the betterment of our student-athletes. Through his efforts, he has kept the program moving forward. Bill is a good man and a good football coach. All of us in the Illini Nation owe him a debt of gratitude for his work leading our team these last months. At this juncture, however, I think it is most important that we position our program for long-term success by creating a more stable environment for the coaches, players, and prospective student-athletes.”

Cubit served as the interim head coach last season after former head coach Tim Beckman was fired a week before the season for mistreatment of players. Under Cubit, the Illini finished the 2015 season with a 5-7 record, failing to win its sixth game against Northwestern at Soldier Field on the last say of the season. He was officially named the head coach of the program on that day before the game.

Offensive coordinator Ryan Cubit was also relieved of his duties. The press release also mentioned that other assistant coaches will have an opportunity to interview for the head coach position.

Spring practice was expected to start on March 11, but that has been delayed until a new head coach and coordinator have been found.

Bill Cubit will receive the remaining balance on his contract, which will approximately be $985,000. Ryan Cubit will be paid $361,000.

Whitman indicated that he will name a new head coach as soon as possible.

Stay tuned with The Daily Illini for continuing coverage of the breaking news.