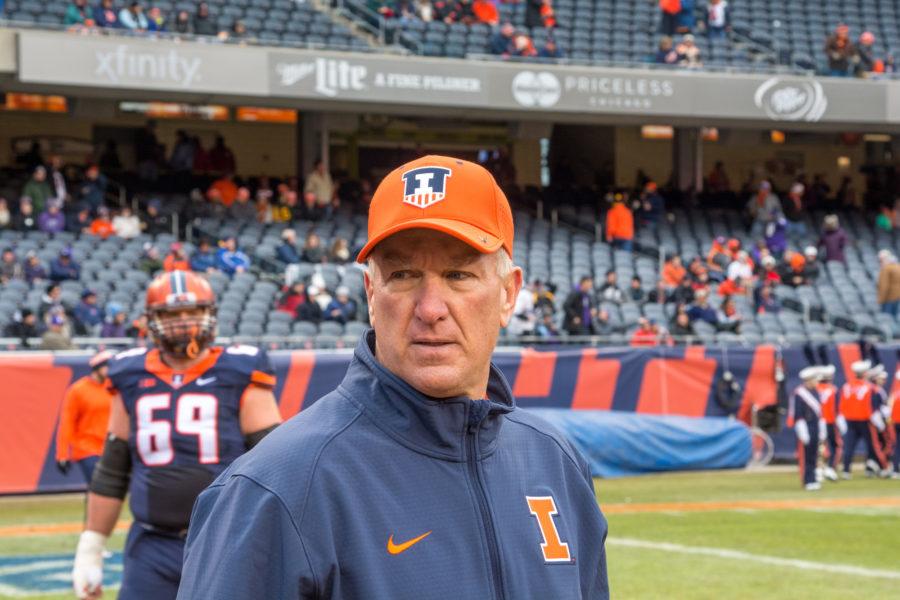 Head coach Bill Cubit watches his seniors line up to be honored on Senior Day before the game against Northwestern at Soldier Field on Saturday, Nov. 28.

(3:40 p.m.) The press conference has ended. Please follow up with us online for more coverage.

(3:37 p.m.) Regarding the basketball program, Whitman says he has low tolerance for off the court problems. Whitman said Groce and him have talked about it and both are on the same page.

Whitman says he is not afraid to have difficult conversations with coaches when things are happening off the field that distract from the program.

Whitman said putting a length on Groce’s time at Illinois would be premature.

He said having an appreciation for Illinois is key when it comes to coaching candidates.

(3:35 p.m.) Whitman says it is a nontraditional time and realizes that it is a challenge. But getting someone on board and still being successful with spring ball, is the goal right now.

Whitman says the potential of a search firm is interesting and that he’s debated using one as his career has gone on. Whitman says he has a level of familiarity with football and says this level gives him an advantage.

When asked if this was part of a proposal during his interview phase, he said absolutely not.

He says he gives great thanks to President Timothy Killeen and Interim Chancellor Barbara Wilson for not interfering with hires.

Whitman said the investigation was not a part of the decision to fire Cubit.

He will be reaching out to recruits in the next 24 hours. He says the University will handle each case individually if recruits wish to be let out of letter of intent.

Whitman said he told players to never apologize for what is happening at the University of Illinois.

Whitman says it is a nontraditional time and realizes that it is a challenge. But getting someone on board and still being successful with spring ball is the goal right now.

Whitman says it was cleaner for the next coach to make the move to fire Ryan Cubit as well.

He talked about keeping basketball coach John Groce and says that he’s really excited on how the future looks for that program. He wants to provide the largest amount of support to be successful.

He said the original schedule had roughly two-thirds of the practice schedule after spring break.

(3:20 p.m.) “Some might see this as another body blow in a series of body blows,” Whitman said. “I see this very differently and this the first very positive step to developing that championship culture.”

Whitman says there are always financial restraints, but the chancellor and board are all prepared to go get the best coach.

(3:19 p.m.) Whitman said the contract length was one of the reasons he wanted to act now and that the short length made a difference. He’s said he’s confident he’s made the right decision.

He said Cubit has led the program through a difficult time, but Whitman wasn’t in a position to support him in a way to move forward. Whitman states the contract posed challenges in hiring and recruiting, along with off-the-field changes.

“Bill has done nothing wrong in this,” he said. “I told him the first time I met him, we’re in a challenging position.”

(3:15 p.m.) Whitman said they want someone with integrity and a championship vision. He said It’s easy to say what we’re looking for, but not easy to find. However, he said they have a plan and that he hopes the Illini fans would all be disappointed in him if they did not have a plan.

Whitman said the Board of Trustees has been incredibly supportive and that he has talked with people about this in the last week or so.

He concluded saying it was his decision, but he involved lots of people.

“They are a very tough resilient group of men,” he said. “It was good to have the opportunity to be with them in that room and be with them, in a room where I’ve spent a lot of time.”

“We’re striving for a standard of excellence. The goal for us is a championship standard and today we took a big step in that direction.”

(3:05 p.m.) Whitman started off by thanking everyone for coming and thanking Bill Cubit for his time coaching Illinois football.

“I want to thank Bill. As you can imagine, this has been a very difficult job to step into. He’s done an admirable job,” Whitman said.

He said this was not a decision taken lightly, adding that they are dealing with real people, a staff, the players and their families.

“When you make a decision to change football coaches, you throw a lot of things into chaos,” Whitman said.

Whitman said he visited with players a few minutes ago and discussed why he didn’t tell the players earlier. He said information travels quickly and by the time he left Cubit’s office and got back to his own, he was already receiving calls.

A few players will be available to speak following Whitman. The move comes on Whitman’s first day on the job as athletic director. In a press release, Whitman expressed his desire for stability within the football program.