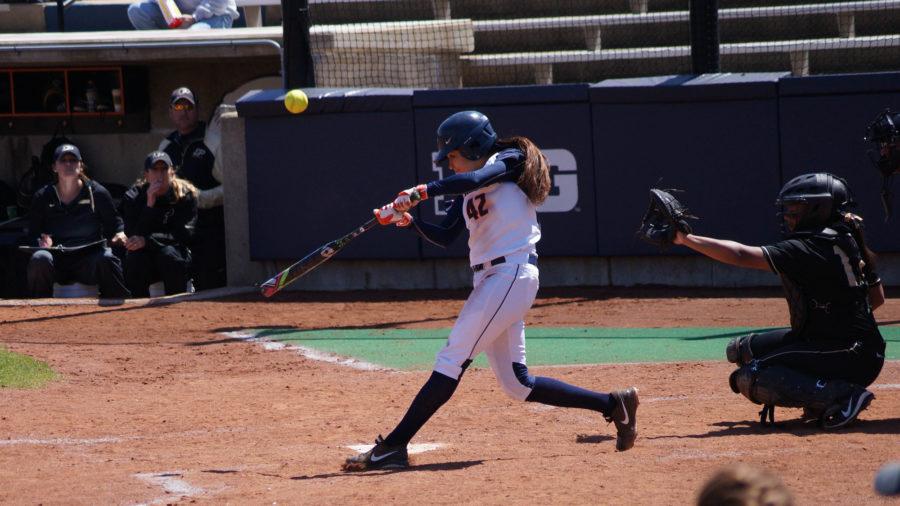 After battling inconsistency in last week’s Texas Invitational, the Illinois softball team (12-7) settled in at this weekend’s Under Armour Invitational.JT

The team put together its best five-game stretch, ending the invite 4-1.JT Illinois’ four wins are a two-game improvement over last year’s showing in the same invitational.

Illinois notched two of its four victories in day one, defeating Sam Houston State and Central Michigan.JT The Illini put up double-digit runs in both contests, scoring as many as seven runs in a single inning.JT

“We played solid team ball today especially in our second game,” head coach Tyra Perry said. “Our seniors Allie Bauch and Remeny Perez were both leaders at the plate.”

Day two brought the team its only loss of the weekend, and the return of a familiar face.

Junior Ruby Rivera made her return to the diamond after suspension. The shortstop played a part in an Illini infield that committed only two errors throughout the Invitational.

Illinois split the day shutting out Penn 8-0, then getting narrowly defeated by host South Florida, 5-4.JT

Perry’s team scored a run in every inning except the fifth versus Penn, giving freshman Taylor Edwards the first win of her collegiate career.

“We played hard in our first game of the day,” Perry said. “I was excited to see Edwards come out and own the circle. Our defense made plays behind her and we were strong offensively.”

Game two was a different story. Illinois only put runs on the board in the fourth inning, falling short of a comeback.

“The USF game was a tough one,” Perry said. “We started out slow in the first few innings and fell behind. We showed a lot of fight in the later innings but fell short in the bottom of the seventh. Tomorrow is a new day. We are looking to finish the tournament with solid play.”

Finish with solid play it did, shutting out arguably its toughest opponent of the weekend — East Carolina — by a score of 11-0.JT

Four starters — Carly Thomas, Nicole Evans, Bauch and Rivera — had two RBIs each and accounted for six of the team’s 11 runs.

On the hill, Edwards threw her second shutout of the tournament, giving her the first two wins of her collegiate career. Edwards’ success allowed pitcher junior Jade Vecvanags, who started nine of the Illini’s last 15 games, some time off.

Illinois takes the field twice in a doubleheader versus IUPUI on March 15.JT