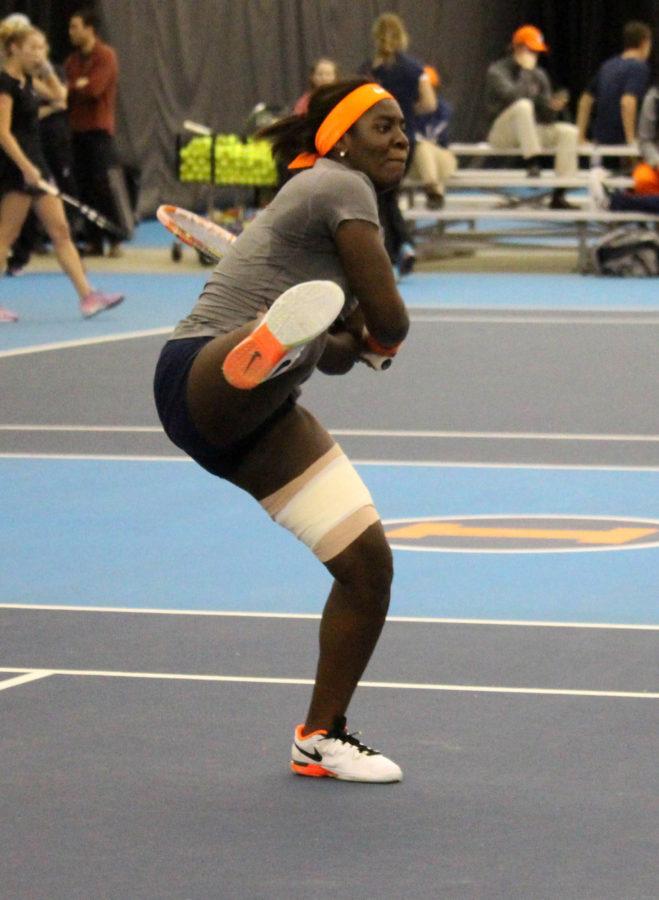 Ines Vias does a powerful one handed rally at the Atkins Tennis Center on Febrary 26, 2016 against Northwestern. Illini lost 3-4.

The Illinois women’s tennis team had a busy weekend up north.

The Illini (5-6) defeated the unranked Wisconsin Badgers (3-8), but were downed by No. 30 William and Mary (10-4) at the Nielsen Tennis Complex in Madison, Wisconsin.ss

llinois had won four straight against Wisconsin before the teams’ Friday faceoff.ss Wisconsin had a 23-19 lead in the all-time series versus the Illini before the contest.ss

The Illini started out strong, winning 2-of-3 in the doubles matches and taking the first point. Their first doubles team, Louise Kwong and Ines Vias, won 6-1 and is 6-2 in dual play in the spring.ss

Singles play did not go as smoothly for the visitors.

“We certainly dug ourselves a hole in singles,” head coach Evan Clark said. “To their credit, Jerricka (Boone), Ines and Alexis (Casati) were able to dig us out. To lose all six first sets in singles and come back shows us there is a problem, but also shows a tremendous amount of fight from our team.”

But the Illini won the three final contests with Vias, Boone and Casati all snagging singles victories.ss

“It was great to have Alexis out there, last match on, fighting and clawing for every point,” Clark said. “We are really proud of the way she handled those moments.”

The Illini transitioned into Saturday’s matchup with William and Mary. The Tribe cruised past the Illini, winning 5-2.

In singles play, the Illini fought back and gained two points out of the contest. Casati and Kwong were the first to lose, but Baillon brought the Illini within two by defeating her opponent in straight sets 6-1, 6-4.

Pedraza Novak and Boone both lost, clinching a Tribe victory. Vias ended the match on a high note, winning in a three set tiebreaker and went 2-0 in singles on the weekend.