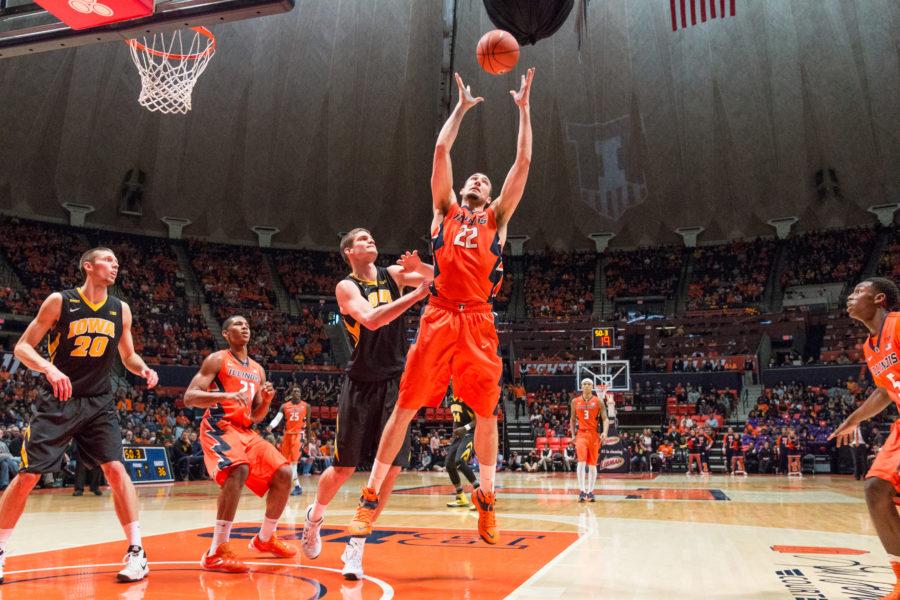 Illinois’ Maverick Morgan grabs a rebound during the game against Iowa at the State Farm Center on February 7. The Illini lost 77-65.

Tweet: The football program is seeing some March Madness, while the hoops team is trying not to go out with a whimper

The only March Madness Illinois will likely experience this year is within its football program, which is currently experiencing an unprecedented period of coaching turnover amidst rumors of Lovie Smith’s return to the Land of Lincoln.

But Illini basketball season is ongoing, even though Illinois’ final regular season basketball game at Penn State on Sunday morning will mostly be an afterthought for a majority of the fan base. The two teams will go at it with Big Ten Tournament seeding on the line.

Everyone knows fans in Happy Valley only get excited for football season and the football off-season, with maybe some wrestling sprinkled in. The atmosphere inside Bryce Jordan Center will probably be sleepier than Sunday church services in State College when the game tips at 11 a.m., so it’s on the teams to provide the energy.

Penn State and Illinois stack up similarly on paper. Illinois is ranked as the No. 139 team in the country in college basketball statistician Ken Pomeroy’s rankings, and Penn State checks in at No. 142. Both rank near the bottom of Division I in major statistical categories; the Nittany Lions are atrocious offensively, while the Illini are dreadful on defense.

Brandon Taylor and Shep Garner are far and away Penn State’s best players, putting up 16.2 and 14.2 points per game, respectively. Head coach Pat Chambers has always gotten his guys to play hard, and the Nittany Lions have picked up a couple of impressive wins down the stretch over Indiana and Iowa.

Considering Penn State has given some of Illinois’ better teams tough games over the last decade in Happy Valley, it will take an above-average effort for the Illini to escape with a victory.

Thursday’s 26-point blowout at the hands of Maryland was the latest indicator that the Illini haven’t shown meaningful improvement as a unit throughout a season pockmarked with significant injuries. Barring a dream run in the Big Ten Tournament, the theme of this losing season will be the individual development of guys like Maverick Morgan and Jalen Coleman-Lands not aligning with the team’s lack of progress on the floor.

The likelihood of a Big Ten tourney run in Indianapolis next week is low, and I’m not sure the result of Sunday’s game does a whole lot either way to affect their chances. Losing to Penn State in basketball is always depressing, but since a loss would mean a first-round matchup with a Minnesota team whose roster has lost four of its best players to suspension or injury, the Gophers are actually a more desirable opponent than Rutgers.

Advancing past the second round would require knocking off a decent team and the Illini playing completely out of character, so we’ll cross that bridge when we come to it.

It’s sad that a program whose final games of the regular season used to matter for determining NCAA tournament seeding — and occasionally Big Ten titles — now isn’t even in the bubble discussion.

An early Sunday game against Penn State in a season like this is the epitome of going out with a whimper, no matter the result.