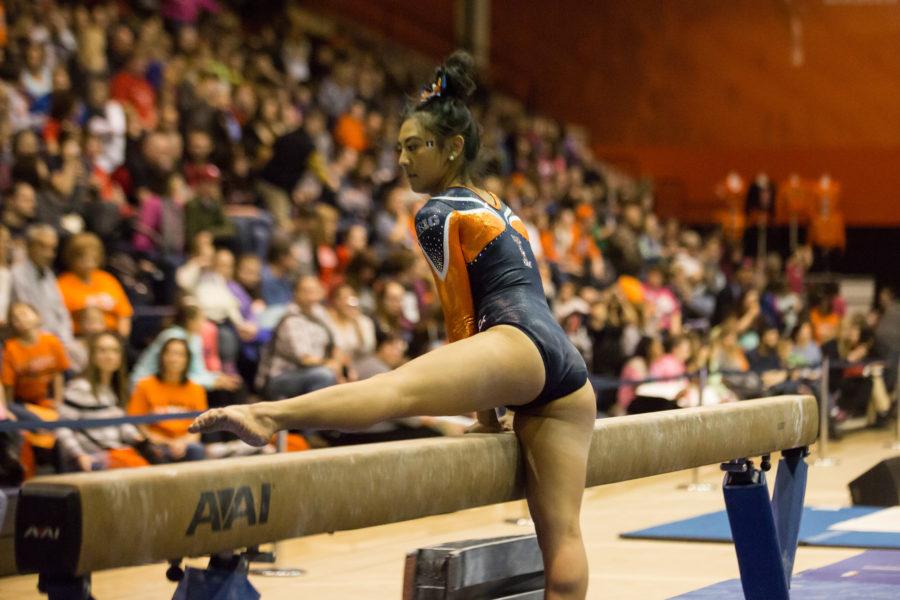 The team carried the momentum from its three-meet winning streak into the matchup against Northern Illinois, Illinois State and UIC and came out on top.

The Illini posted a total score of 195.425 and took home titles on all events — except for bars — and the all-around.ss

They gathered a 49.150 event total on beam, making it the team’s fourth straight meet scoring above 49 on the event. The beam rotation was highlighted by senior Sunny Kato’s 9.925 scoring performance. Kato has been consistent on beam, posting a 9.925 or higher for four meets straight, and garnering the event title each meetss.

“I’ve really just been focusing on trying to put myself in a competition setting at practice and that always helps,” Kato said. “There’s always room to improve, so ever day in the gym I try to do something better and I’m hoping to eventually break my record.”

Illinois’ victory was sealed on the floor event where they tallied a season-best 49.325. All of the Illinois gymnasts posted a 9.800 or higher, led by senior Giana O’Connor 9.900 mark, good enough for the event title.ss

The 195.425 may have produced a winning total for the Illini, but it’s not the score they’re looking to see at this point in the season.

Head coach Kim Landrus’ team made multiple mistakes on bars for a second straight meet. With two falls in six routines, the Illini had to count non-hit routines in their event total.

”I think we hit a good three events. We struggled on bars so we had to count a major mistake,” Landrus said. “I’ve seen these girls hit their routines many times a week and we’ve got to do it on gameday so I know that they were disappointed with what happened today and I know that they’re going to go back and reevaluate what they’re doing everyday and how they’re doing it and really get out of it.”

The Illini accounted for the mistake in the second half of the meet, where the beam and floor rotations boosted their score.

“After bars, the way we came back, I was really proud of the team for just forgetting about bars, moving on and having a great time on beam and floor,” Kato said. “That’s all I can ask for of my teammates.”

Roe had a successful day, performing a career high 9.825 on beam and tying her career-high 9.825 on floorss. She also competed on vault for the first time since the beginning of the season, posting a 9.700ss.

“I felt really good, I think having good training behind me is what gave me the confidence,” Roe said. “It really helped going into today knowing that I could do it and that my team had my back.”

This was Illinois’ fifth lowest score of the season. Roe and Kato said the gymnasts were frustrated and disappointed with the end result and will use that to better themselves for next week.ss

“It was a little frustrating because we’re capable of a lot more,” Roe said. “I think, going into next week and preparing for the Big Five, we really just have to focus down on details and hitting routines.”

Landrus wants to focus on the good things that her team can take away from this meet. She pointed out performances from Roe and freshman Brielle Nguyen, who turned in career-highs at the meet and have improved a great deal this season.ss

“There were so many positives today that I think will carry us far as we go into the postseason,” Landrus said. “If we have a problem, we have to find solutions and that’s what it’s going to come down to.”