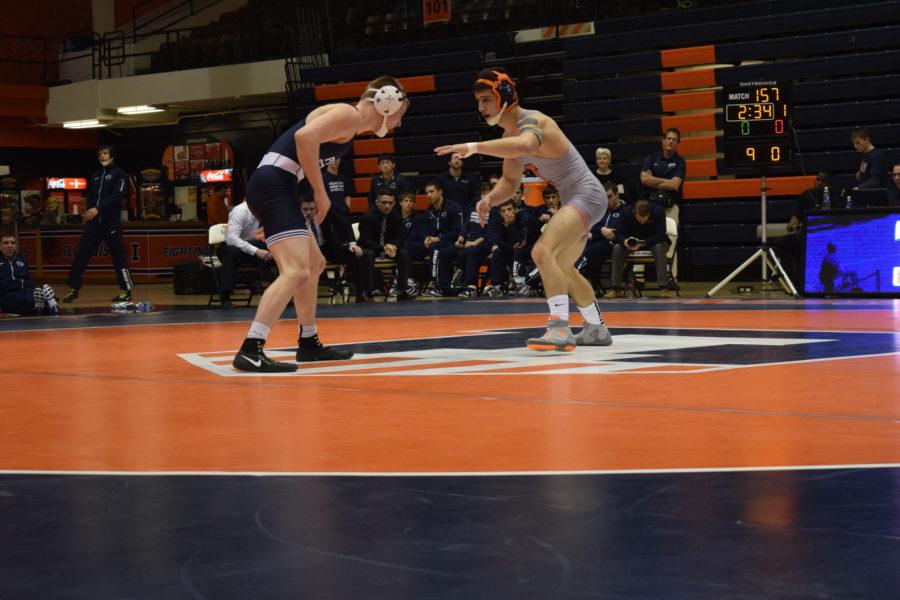 Tweet: #TheRematch between No. 2 Martinez and No. 1 Jason Nolf is here

There were 23,684 fans in attendance the first day of the Big Ten Wrestling Championships in Iowa City, Iowa, on Saturday.

The host Iowa Hawkeyes sit in second place in the standings with 106 team points, six ahead of defending champion Ohio State. No. 1 Penn State leads the way with 133 total team points.

Three Illini will battle for Big Ten titles Sunday, while Steven Rodrigues at 165 pounds, Jeff Koepke at 184 pounds and Brooks Black at heavyweight all are in the mix for third place finishes.

At 133 pounds, No. 1 seed Zane Richards received a bye in the first round of the tournament and awaited the winner between nine seed Dom Malone of Northwestern and Rossi Bruno of Michigan.

Bruno defeated Malone by fall in six minutes, 37 seconds and took on Richards in the elite eight.

Richards defeated Bruno earlier in the season by decision and would be the same result at the Big Ten Championships, as Richards advanced to the final four by a 10-3 decision.

In a match between the five seed Eric Montoya of Nebraska and four seed Geoff Alexander of Maryland, Montoya won in a close match, 6-3.

The final four at 133 pounds was set, as the top half of the bracket featured Richards and Montoya – who had not faced each other in the team’s previous matchup – and the six seed Ryan Taylor of Wisconsin against No. 2 seed Cory Clark of Iowa.

Clark defeated Taylor by a 10-7 decision and Richards defeated Montoya 5-1 to set up a rematch between the Illini and the Hawkeye for the conference crown.

The two faced each other in January, with Richards defeating Clark, 5-3, in sudden death.

This bout will not be the only rematch on the day, as a 157 pound contest between No. 1 Jason Nolf and No. 2 Isaiah Martinez and a 174 pound match between No. 1 seed Bo Nickal and No. 3 seed Zac Brunson will both be decided for the second time.

The 157 pounds weight class will feature the second of what will may be several matches between No. 1 Jason Nolf and No. 2 Isaiah Martinez will commence.

Martinez opened up his title defense with a technical fall over Wisconsin’s TJ Ruschell in the first round.

After defeating Tyler Berger of Nebraska – who received a bye in the first round – by a 14-11 decision, Martinez faced off against Brian Murphy of Michigan in the semifinals.

Martinez defeated Murphy in January by technical fall in 3:34, but was much closer in their second meeting.

Martinez came out on top with a 5-4 victory over Murphy to set up an all-important rematch to decide the 2016 Big Ten champion at 157 pounds.

The final rematch of the day for the Illini comes between top seed Bo Nickal of Penn State and third-seeded Illini Zac Brunson.

Brunson began his tournament run with a technical fall victory of his own over Purdue’s Andrew Hoselton in 2:43 to advance to the quarterfinals

From there, Brunson took on the winner between Nebraska’s Micah Barnes – the six seed – and Michigan’s Andrew Calderon – the 11 seed.

After Barnes defeated Calderon by a 10-3 decision, Brunson would do the same, defeating Barnes by a 6-2 decision to advance to the final four.

Brunson took on Iowa’s Alex Meyer in the final four and pinned him in two minutes to advance to the championship match against Nickal.

Receiving a bye in the first round, Nickal needed to win two matches to reach the championship match – which he did in dominating fashion.

Nickal took care of Rutgers’ Phil Bakuckas by major decision, 15-3, and pinned Ohio State’s Myles Martin in 2:28 to reach the championship final in his first season.