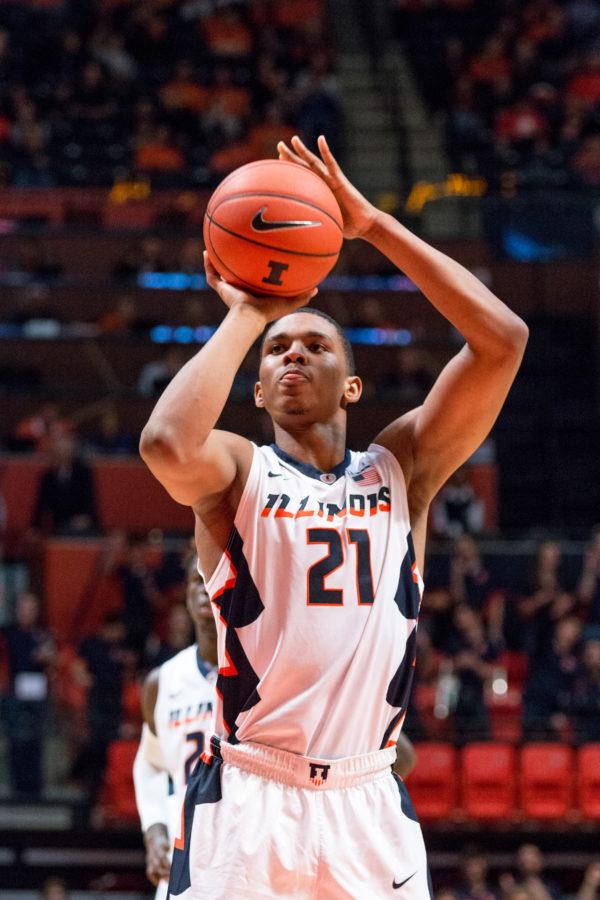 Illinois’ Malcolm Hill shoots a free throw during the game against Rutgers at the State Farm Center on February 17. The Illini won 82-66.

In the final game of Illinois’ regular season, the recurring theme of individual players shining but the team still sinking played out once again.

The Illini got an outstanding performance from Malcolm Hill, but all his teammates combined couldn’t match his 39-point outburst in Illinois’ 86-79 double-overtime defeat at Penn State. The loss put a lid on Illinois’ 13-18 record in the regular season, dragging it to 12th place and 5-13 in the Big Ten.

The Illini are now locked into the No.12 seed in the upcoming Big Ten Tournament in Indianapolis, where they’ll face 13-seed Minnesota on Wednesday.

Hill complemented his career scoring day with 13 rebounds, good for his seventh double-double of what has been a stellar season for the 6-foot-6 junior. But his superhuman afternoon and some late-game heroics from teammate Khalid Lewis couldn’t rescue the rest of the team’s lackluster showing on either side of the ball.

Illinois’ other three starters — Maverick Morgan, Jalen Coleman-Lands and Kendrick Nunn — went a combined 10-for-37 from the field. Besides a pair of first-half jumpers from freshman D.J. Williams, the Illini’s bench production was non-existent.

The game was sloppy, painful and entertaining all at once to watch. Both squads struggled with turnovers and chances to put the other team away, but the Nittany Lions finally pulled ahead for good in the second overtime.

Penn State’s two best players, Shep Garner and Brandon Taylor, wouldn’t let the Nittany Lions die in their home finale. Garner finished with 22 points, and the senior Taylor was his team’s MVP with 21 points and 11 rebounds in his final game at Bryce Jordan Center.

Perhaps most frustrating for Illinois was yet another late-game failure with the game on the line. Following a missed free throw by Garner nearing the end of regulation, Hill had a chance to win the game with the score knotted at 67. He broke down his defender at the top of the key in the final seconds, but instead forced an errant pass to Morgan as the clock hit zero.

Illinois was unable to get a shot off, and the game went to its first overtime. We saw almost the exact same scenario play out in January against Ohio State, as head coach John Groce left his final timeout in his back pocket while Hill brought the ball up for the final shot. Both games resulted in OT losses.

It’s fair to question Groce for deciding not to draw up a final play, especially after a nearly identical situation already burned him once this season. But I can hardly fault the guy who put up over half his team’s points for mistakenly deferring to Nunn at the end of regulation. Hill was a monster all afternoon, and he drained two cold-blooded free throws to force a second overtime. If Hill hadn’t loaded the rest of the team on his back, Penn State’s original double-digit second half lead would have definitely held up.

Illinois’ Lewis also deserves some serious credit for bringing the Illini back from a 61-53 deficit with five minutes to play. In a ridiculous sequence, Lewis hit a three to cut Penn State’s lead to three, then converted two free throws following a steal, then deflected another pass for a steal on the Nittany Lions’ next possession. And he wasn’t done.

With one minute remaining in regulation, Lewis gave the Illini a 66-65 lead on a fall-away floater with the shot clock winding down before blocking Isaiah Washington’s potential go-ahead 3-pointer. Lewis’ incredible late-game push didn’t lead to a win, but his season-high 10 points came during his most memorable stretch of the season.

The wheels eventually came off in the second overtime for Illinois, as Hill was unable to find clean looks and his teammates who did couldn’t convert.

The loss was Illinois’ fifth in seven tries at Penn State, and it was an appropriate end to a regular season that saw the Illini struggle to defend anyone who lined up across from them. Illinois now moves onto the Big Ten tourney, where they’ll have to quickly reverse this season’s ugly trends if they hope to have any meaningful success.

Correction: This column originally said that Malcolm Hill’s deflected pass at the end of regulation was to Kendrick Nunn. This pass was actually intended for Maverick Morgan. The Daily Illini regrets this error.