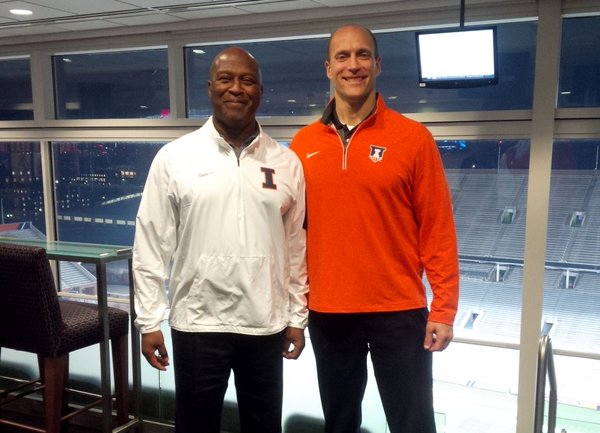 Illinois football players have experienced many surprises during the past year.

Their head coach was fired a week before the start of the season. Their athletic director was fired during the middle of the season and the players answered questions about player mistreatment.

And when everything seemed calm, their new head coach was fired less than a week before the start of spring practices.

But little did the players know that one more surprise was coming: the arrival of Lovie Smith.

They heard the rumors over the weekend and kind of knew what was to be expected when athletic director Josh Whitman called for a team meeting Monday morning. Players knew Whitman was going to announce their new coach; they just weren’t expecting to see the man in person.

The Illini looked with wide eyes at the former NFL coach, and when Whitman announced that Smith was their new head coach, everyone stood up to give their new lead man a standing ovation.

“Woah, he’s actually here,” defensive lineman Chunky Clements remembered thinking when he saw his new head coach. “He’s actually in the building and this is our coach. The guy who is going to be leading us for the next few years, or even longer.”

Players were as surprised as anyone with Whitman’s swift decision to fire Bill Cubit and bring in Smith.

The two were put into contact by former Illinois coach Ron Turner and spoke for the first time two weeks ago.

Whitman approached the situation with sensitivity. He traveled to Tampa Bay last Thursday to discuss the possibilities that could arise between Smith and the University.

Interim Chancellor Barbara Wilson and President Timothy Killeen were in Naples, Florida, for an alumni event while Whitman was in Tampa. Whitman met with Wilson during breakfast to discuss the hypothetical situation. When she was on board, the two interrupted Killeen’s breakfast with his wife to further the conversation.

After the three talked, it became clear what needed to be done. Whitman fired Bill Cubit on Saturday and by Sunday, Smith was in Champaign.

Monday he signed a six-year contract worth $21 million.

“Today, we turned a page on what’s been a difficult age,” Whitman said to start the introductory press conference. “We will do everything we need to do to position our people, student-athletes to be successful.”

Smith didn’t get into any specifics when he met with the players. He mentioned the responsibility that they have to the University and that they should trust in his plan. Smith has two goals for his players: that each earn a degree from the University and play winning football.

“The players were buying in,” Smith said. “This is an exciting time for Illinois football. I can’t wait to take us to that next level.”

For many of the Illini, there won’t be an issue with buying-in to Smith’s system. Many of them grew up as Chicago Bears fans and watched Smith coach their team to the playoffs and the Super Bowl. They know that he has the tools to make them a successful team.

Smith mentioned the importance of matching the high academic levels the University has set. When asked if he will lower academic standards so that he can bring in the best recruits, Smith responded that he knows the University’s standards and that’s what he’s going to sell.

He also pointed out that academics shouldn’t get in the way of football.

His belief in academics is one of the reasons why Smith decided to return to the college game. Smith has been called a “leader of men” by every team that he’s coached, and with the opportunity at Illinois, he knew it was time to return to a part of the game where he can have a great impact on a young man’s life.

“At Tampa, I had a lot of time to reflect on a lot of things and one thing was being a teacher for young men,” Smith said. “I want to have an impact on our young men’s lives.”

Players are happy to put the year in the past. The experiences of the past year brought them together, but they’re ready to move on.

“It takes all the outside pressure away,” Clements said of having Smith as a coach. “We have a great guy to lead us and we’re ready to be led.”