Lovie Smith can bring students back to Illinois football 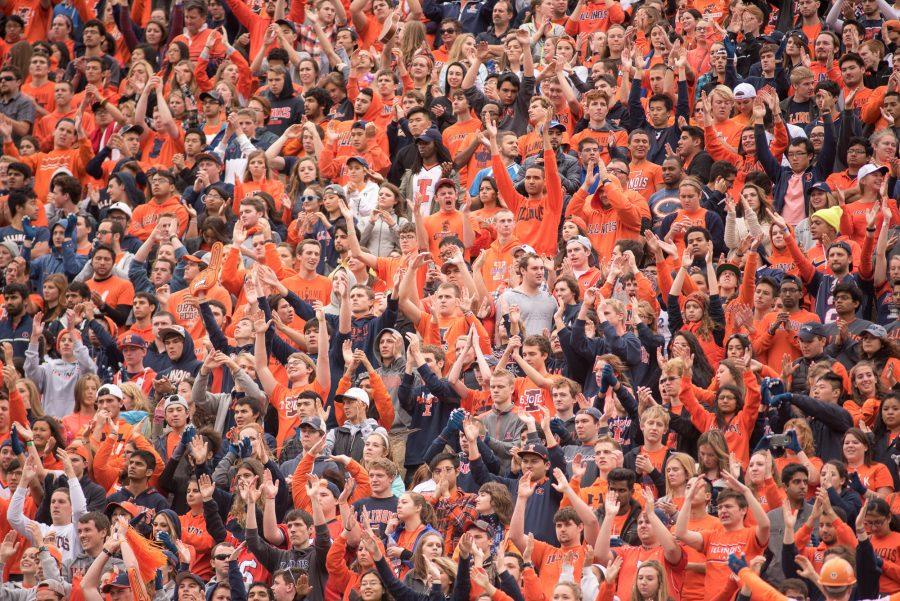 Illinois’ student cheering section, Block I, claps and chants during the Homecoming game against Wisconsin at Memorial Stadium on Saturday, October 24. Illinois lost 13-24.

My roommate, bless his heart, doesn’t follow Illinois football much at all. He can follow the games, but doesn’t have tickets, and is a “Dad’s-Day-only” attendee of Illini games. He’s an average Illinois student in that regard.

But, like so many Illinois students from Chicagoland, he knows Lovie Smith.

And when the news of Smith’s hire trickled out this weekend, and when it broke the floodgates Monday morning, his casual analysis was spot on.

“This is going to get a lot of students excited.”

Lovie appeared at the Illini Union midday Monday and was mobbed by students. He’s the biggest hire in the school’s history, was a highly visible persona even before he came to campus and he’s the University’s first black head football coach.

The importance of that last point can’t be overstated. This campus has a less-than-great record on race relations. Lovie’s hire is a significant one. It’s not a silver bullet by any means, but it’s a step in a positive direction.

He had the students at the Union in the palm of his hand. He walked in and spoke for just a few minutes, and instantly, the students were captivated.

They’ll be keeping their eyes on Lovie. He’s hard to miss.

Football fans and non-football fans alike, like my roommate, know Lovie. Four days ago, Illinois’ head coach was a man — an honorable one named Bill Cubit — whose biggest career moment was being named MAC Coach of the Year.

The new man with the headset in Champaign has been to the Super Bowl. A student in my 10 a.m. Monday class, in which I hadn’t heard a lick about sports before Monday, suggested “Lovie might take us to the Super Bowl.”

Don’t worry, my friends, good times are ahead. You’ll have enough folks joining you for the card stunts, lots of people to shake keys during kickoff and certainly plenty of students to dance along to the Marching Illini with you.

Lovie’s team might even — with a little help from Red Grange and his new Grove — compete with the Saturday morning behemoth that is “Block.”

The donors bring the bucks to hire Lovie, and the local fans buy the season tickets, but the students are the ones that tip the balance atmosphere-wise.

There was a single cloud hanging over Monday’s proceedings: Lovie’s an NFL coach who people speculated would head back to the pros after having some success in Champaign-Urbana.

But Illinois’ newest coach lifted that cloud quickly — he was clear about his plan.

“This is where I want to finish up my football career.”

If that’s the case, Illinois football will have more and more fans in years to come, and average Illinois students — like my roommate — might be among them.

Peter is a junior in Media.
[email protected]
@pbaileywells