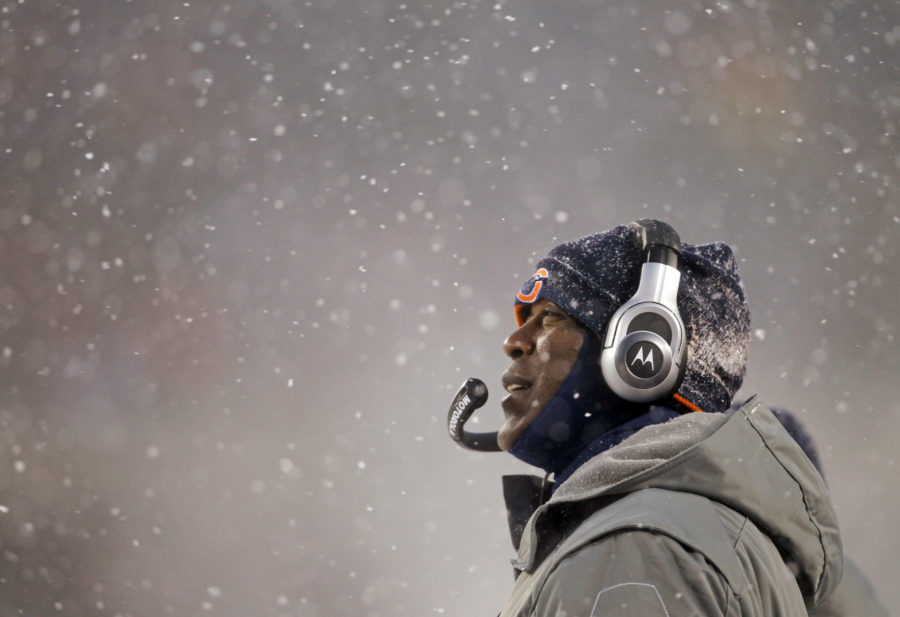 Lovie Smith, then the Chicago Bears’ head coach during a game in 2010 against the New England Patriots. Illinois athletic director Josh Whitman announced Monday via Twitter that Smith has been picked to be the Illini’s next head coach. (Scott Strazzante/Chicago Tribune/MCT)

Illinois athletic director Josh Whitman ended speculation Monday when he announced via Twitter that Lovie Smith will be the new head coach of the Illinois football team.

The news comes two days after Whitman fired former head coach Bill Cubit during Whitman’s first day as the leader of the athletic department. Reports of Smith’s candidacy for the job surfaced quickly Saturday and Whitman traveled to Tampa Bay on Sunday morning but declined to comment about the reasons for his travel.

“Naming Lovie Smith as the Illinois head football coach is the first step in taking this program to a place of national prominence,” Whitman said. “We will build a program that contends annually for Big Ten and national championships. The timing for this move was extremely tight, and we needed to move quickly. A coach of Lovie’s caliber would not have been available to us if we had waited until after the 2016 season.”

Smith returns to college football after spending the last 20 years as an NFL coach. The new Illinois head coach split his time as a linebackers coach and defensive backs coach with Tulsa, Wisconsin, Arizona State, Kentucky, Tennessee and Ohio State.

He is the 25th head coach in Illinois history and the program’s first African-American coach.

“I am extremely excited to be named head coach of the Fighting Illini. Josh approached me about this possibility, and I immediately seized on the opportunity to make a difference in the lives of the young men who are part of the program today and in the future. I take this responsibility very seriously and can’t wait to get a staff in place to start our move to make Illinois a contender for Big Ten titles. We will play an exciting brand of football that will make our fans, alumni, student body and members of the University community extremely proud.”

Smith will have quick work to do. Spring practice was supposed to start Friday but Whitman said Saturday that would be delayed until a head coach was named. Smith will also need to hire the rest of his staff — all of the former assistant coaches except Ryan Cubit will be allowed to interview for their jobs.

Follow The Daily Illini for continued coverage of the breaking news.