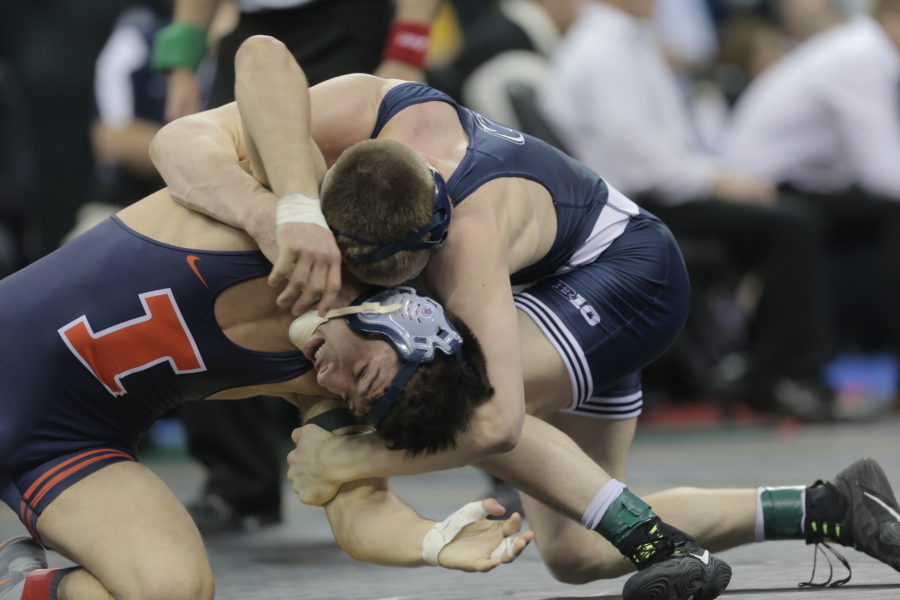 On January 23, then-No. 1 Isaiah Martinez went into a 157-pound bout against then-No. 3 Jason Nolf of Penn State with a 54-match winning streak on the line.

Four minutes, 55 seconds later, that streak was snapped by a Nolf pin of Martinez.

Fast forward to Sunday and the two grapplers were facing each other again, this time with a Big Ten championship on the line.

Martinez came in to the weekend with his mind set on successfully defending his Big Ten title at 157 pounds and lived up to his expectations, defeating the No. 1 seed in double overtime, 4-3.

Each wrestler earned an escape in regular team, sending the match, tied 1-1 to sudden death. Neither Martinez nor Nolf scored in sudden death, so the match went into the first of two overtimes.

Both wrestlers earned another escape apiece in overtime No. 1 to make the bout square at two heading into the deciding period.

Nolf started off the scoring in the second overtime with his third escape of the match to make it 3-2 in favor of the No. 1-seeded Nittany Lion.

Martinez got a third escape of his own to tie the bout at three and won the match in the final 30 seconds of the second overtime to earn his second straight Big Ten title and the 62nd win of his career.

After the match, Martinez was all smiles in front of a cheering collection of fans at Carver-Hawkeye Arena in Iowa City, Iowa.

Martinez said that he learned a lot from his last meeting with Nolf and took that to his advantage this time around.

“He is a fantastic competitor,” Martinez said. “He’s got a good gas tank, but I learned from the last time I wrestled him.

“I always tell myself that if it comes down to something like that, I believe that I will always win and when we went into overtime, I still felt confident that I would find a way to win.”

Martinez was named to the All-Big Ten First-Team and was named the Big Ten’s Outstanding Wrestler of the tournament on top of retaining the conference crown.

Of the three Illini in first place championship bouts, Martinez was the only one to come out victorious.

As a team, Illinois finished in seventh with 88 total team points, just 1/2 point shy of Michigan for sixth.

Penn State won the event with 150.5 total team points, while defending co-champions Iowa and Ohio State finished in second and third with 127 and 126 points respectively.

Illinois head coach Jim Heffernan acknowledged Penn State by how strong they are at every weight class.

“They are very good at 10 weights,” Heffernan said. “They score a lot of bonus points and they have a lot of high end guys and that’s what makes them stick out right now.”

With the win, the Nittany Lions secured a Big Ten team championship for the fifth time in the last six seasons.

Six Illini placed in the top six in their respective weight classes as well.