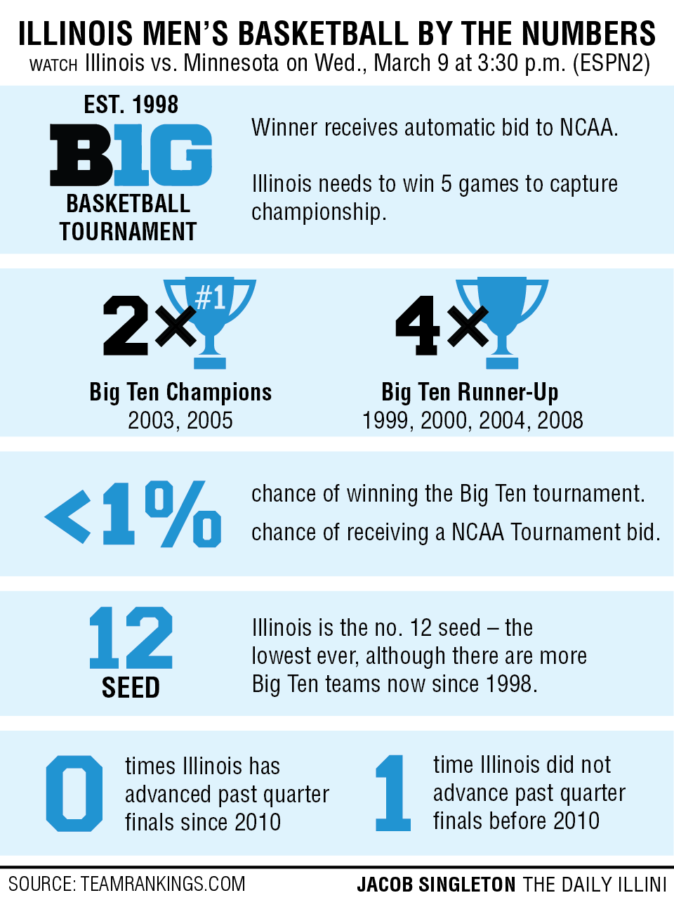 It may feel like football season — or Christmas morning — around the Illinois campus right now, but we’re only a week into March, and there’s still business to take care of on the hardwood.

The regular season is over, and it’s tourney time for the Illinois men’s basketball team.

Two of the Illini’s five conference wins came at the expense of the Gophers, including Illinois’ most recent notch in the win column, a 84-71 victory during this season’s final game at State Farm Center. Illinois has stumbled since, losing two consecutive road contests in very contrasting fashions: a blowout at the hands of Maryland and double-overtime loss to Penn State.

In the latter loss, junior captain Malcolm Hill put on a show and dropped a career-high 39 points — the most by an Illini since Brandon Paul’s 43 in 2012. On Monday, Hill was given second-team All-Big Ten honors for a season during which he did it all for Illinois. He averaged 18.6 points, 6.6 rebounds and 3.3 assists per game and led the Big Ten in total points and free throws made.

“It’s well-deserved,” head coach John Groce said. “It’s been well-documented all that he’s done. Obviously, everybody’s going to look at his points and rebounds — a lot of that was a byproduct of his effort.”

Come Wednesday, Hill and surrounding contributors like junior center Maverick Morgan — averaging 12.3 points and 6.3 rebounds over his last three games — and Jalen Colman-Lands — averaging 14.8 points on 3.5 made threes over his past four contests — will be licking their chops against a depleted Minnesota squad.

Following the indefinite suspensions of leading scorer Nate Mason and key rotational pieces Dupree McBrayer and Kevin Dorsey for violation of team rules, the Gophers have been incredibly short-handed to close out the season. That was taken to a new extreme with the announcement of senior Joey King’s season-ending foot fracture. Minnesota will be forced to play three walk-ons and rely heavily on All-Big Ten Freshman honoree Jordan Murphy. He had 22 points and 10 boards the last time out against the Illini.

Groce said it’s been somewhat unusual game-planning for a Minnesota team that has looked different each time Illinois has played it.

“It is unique,” Groce said. “They’ve played a certain way now for three games, including our last game against them — and really, another way for one game because King’s been out.”

With a win over Minnesota, Illinois will face No. 5 seed Iowa on Thursday,. An upset over the Hawkeyes will result in a date with Purdue, whom the Illini beat at home in January, in Friday’s quarterfinals.

Beneath the smoke of the well-deserved hype surrounding the hiring of Lovie Smith to take the helm of the football program, new athletic director Josh Whitman also made it clear that Groce will indeed remain head coach for at least one more season — no matter the results of the coming games.

Unless they can pull off a absolute miracle and win the tournament outright, the next few days will be the Illini’s only taste of madness this March.