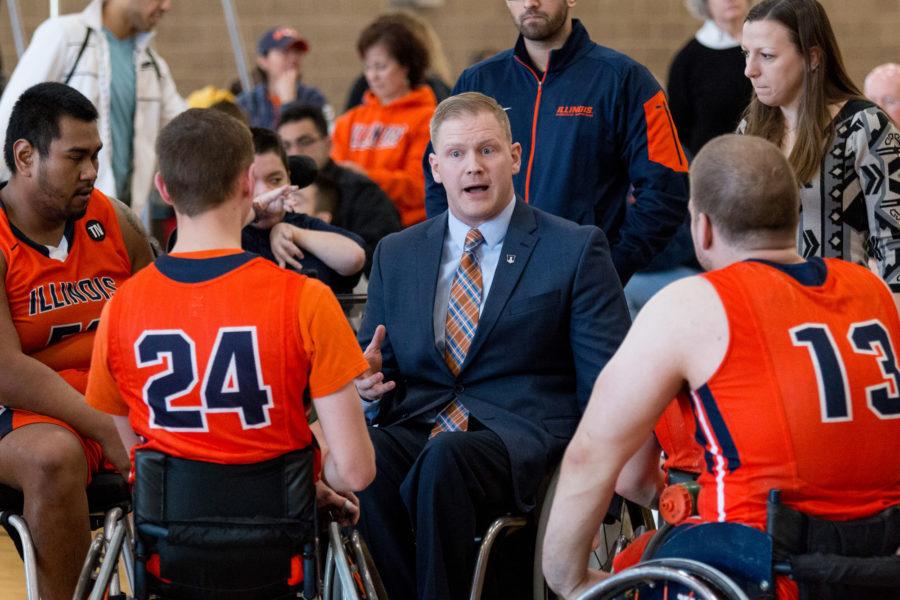 Illinois head coach Matt Buchi talks to his team during a time out in the game against Arizona State University at the Activities and Recreation Center on February 13. The Illini won 69-43.

Since the start of its season, the Illinois men’s wheelchair basketball team considered winning the national championship a reasonable goal.

Now, nationals are here, and the Illini have the chance to achieve that goal.

Illinois enters as the fifth seed, which puts it up against a familiar opponent in its first game — fourth-seeded Missouri.

The Illini went 2-1 against the Tigers in the regular season.

“We are feeling pretty good,” head coach Matt Buchi said. “We have some experience against them this season and we were also able to win one of the matchups without Ryan (Neiswender). Mizzou is missing one of its top shooters due to (academic reasons) so we are in a good spot.”

Buchi said that the key to beating Mizzou is to slow the game down and be efficient with the ball.

If the Illini can get past Mizzou, Buchi said his team will most likely face top-seeded Wisconsin-Whitewater — the defending national champions.

Though Whitewater is a strong team, Buchi feels his team matches up well against them.

“That would be a really good fit for us,” Buchi said. “(The matchup) is kind of what we want. We like the rivalry game and being able to get some redemption because that was the game we had last year in the national championship (and lost).”

Buchi said his main focus against Whitewater would be to slow the Warhawks down on the fast break. He called them a “fast team,” and said if the Illini keep them under control, they should be successful.

“It’s going to be the same crew mostly for next year, but with this one I think that they could win the national championship,” Buchi said. “We want to make sure we try our best and work real hard to take this one home for (Brinkman).”

The Illini plan to run their offense through leading scorers Ryan Neiswender and Spencer Heslop, something that has become routine.

“We like to run (Heslop) and (Neiswender) on one side together,” Buchi said. “They’re really efficient on pick and rolls and working well together with the ball. It forces the defense to bring three or four people to their side and gets our guys on the off side a lot of open looks.”

Buchi is hoping that with these open looks, the Illini can convert and continue to put their opponents defenses in a difficult position.

Illinois will play Game 1 on Thursday, and the nine-team tournament can be viewed online through NWBA.org.