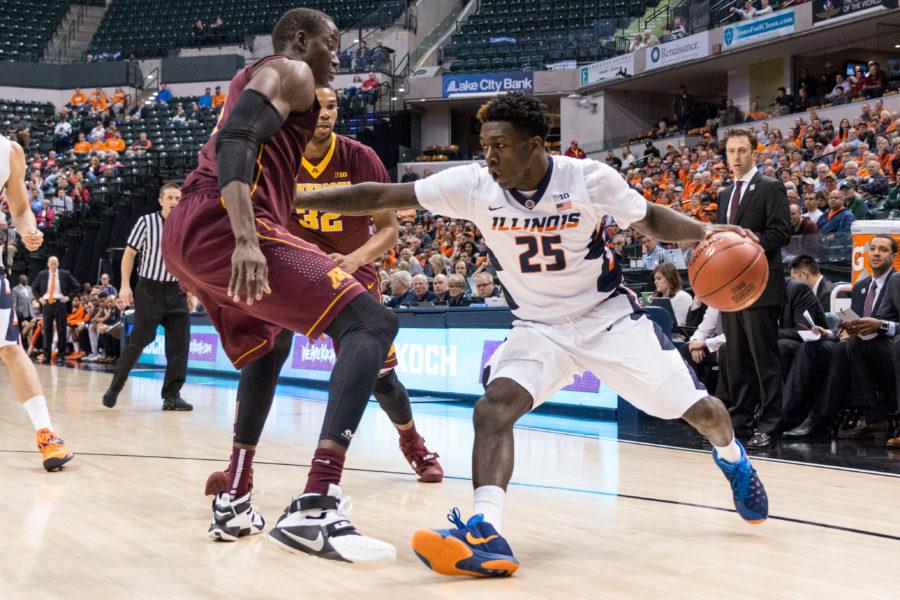 Kendrick Nunn and the Illini got off to a good start in the Big Ten Tournament, beating Minnesota 85-52 in Wednesday’s game.

INDIANAPOLIS — Illinois basketball’s best-case scenario for the Big Ten Tournament was a daunting five-day run, and a relatively stress-free game in the first round was just what the Illini needed.

The 12th-seeded Illini picked up an 85-52 victory Wednesday over a depleted Minnesota team at Bankers Life Fieldhouse in Indianapolis.

The Illini jumped out to an early 22-10 lead and never looked back, leading 13 seed Minnesota 38-22 at the break and extending their lead to as many as 37 in the second half before finishing the Golden Gophers off. Illinois completed the season sweep over the Gophers with its third win in as many tries over Minnesota this season.

Illinois moves onto the second round, where fifth-seeded Iowa awaits Thursday at 1:25 p.m.

With Minnesota only dressing five scholarship players and a collection of walk-ons following a litany of suspensions and an injury to senior Joey King, the Gophers simply couldn’t match Illinois’ superior speed and athleticism. The Illini found themselves open on the perimeter for 13 first half threes and buried seven of them, putting Minnesota in a nearly insurmountable hole early.

Illinois finished 14-of-26 from 3-point distance.

Redshirt freshman Michael Finke entered Wednesday having scored five points over his last four games for the Illini, but he set the tone with a pair of threes in the first half.

Fellow freshman Jalen Coleman-Lands drew within three 3-pointers of the all-time freshman 3-point shooting record of 85 with three triples of his own, and Malcolm Hill and Kendrick Nunn combined to splash eight more. Hill finished with 14 points.

“It’s just all mental and having confidence in it,” Finke said after dropping 17 points. “It felt good to see that first one go in.”

Minnesota’s backcourt was hit hardest by the roster turmoil, especially on defense. The Gophers were forced to use a four-big, one-guard lineup for most of the game, and the Illini keyed in on freshman forward Jordan Murphy on the block.

Murphy scored 22 points in the teams’ matchup two weeks ago, but was hounded by double teams Wednesday and was limited to nine points.

A matchup with Minnesota’s hot mess of a team was ideal for an Illini squad hoping to pull off a five-day miracle in Indianapolis. It exerted minimal energy Wednesday ahead of Thursday afternoon’s date with the Hawkeyes. Iowa easily dismantled Illinois 77-65 in their first meeting, and it wasn’t as close as the final score indicated.

The Hawkeyes blitzed the Illini with a balanced attack from their starters — Peter Jok led all scorers with 23 on Feb. 7 at State Farm Center. Containing him and Jared Uthoff will be a concern Thursday, but the biggest challenge could come on the glass. Iowa out rebounded Illinois 43-32, including 12 on the offensive glass, and senior center Adam Woodbury racked up 10 points and 14 boards.

Fortunately for Illinois, Iowa has skidded toward the finish line since visiting Champaign as the No. 5 team in the country. The Hawkeyes have lost five of seven and fallen to No. 20 in the polls, so the Illini are catching them at as good of a time as any.

Wednesday’s lopsided outcome doesn’t mean a whole lot against this awful Minnesota team, but it’s a nice boost to the Illini’s confidence heading into what will be a true challenge Thursday.

It’s do-or-die time. Illinois must now dig deep and play far above a level they’ve consistently shown all season against Iowa, or face a dreary bus ride back to Champaign.