Illinois wheelchair basketball teams cruise through day one at nationals 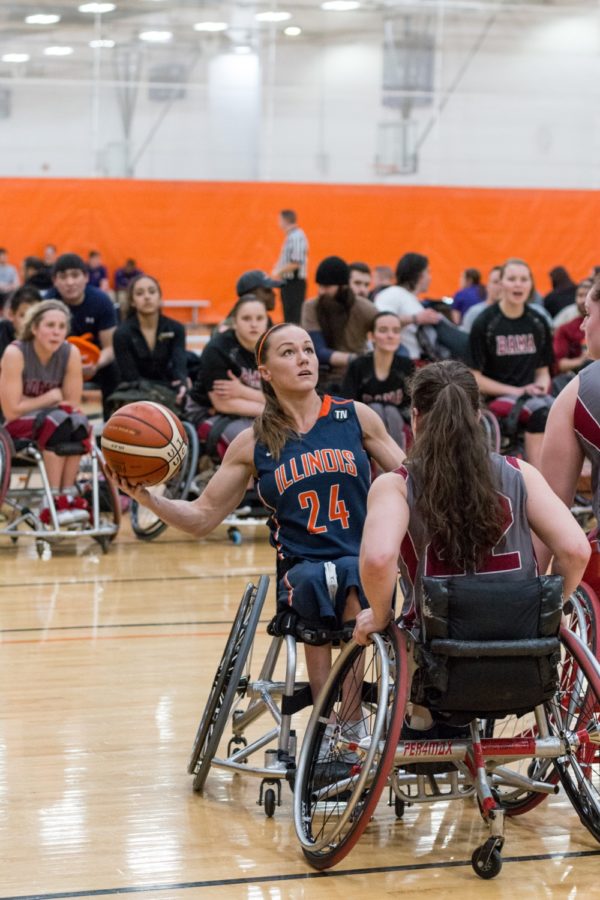 Today, both of the Illinois wheelchair basketball teams took enormous steps towards achieving their goal of winning a national championship.

The men’s and women’s teams both picked up wins and will advance to the next round.

On the men’s side, the Illini came into the tournament as the fifth seed out of nine, and drew a first round matchup with the fourth-seeded Mizzou Tigers.

Mizzou is a familiar opponent for the Illini, as they took two out of three games against the Tigers this season.

Despite being the lower seed, the Illini were able to secure a sizable victory, 51-39.

Illini guard Spencer Heslop was a big reason behind the team’s success, as he contributed 30 points and five rebounds while shooting 72 percent from the field. Ryan Neiswender also had a big game, coming up just one rebound short of a triple-double. He scored 11 points, and chipped in 14 assists and nine rebounds.

With the win, the men’s team will have to wait until Thursday night to see who they play next. Arizona State — who won their play-in game against Auburn earlier — will go up against top-seeded Wisconsin-Whitewater at 8:00 PM.

The Illini will play the winner tomorrow at 2:00 PM for a chance to advance to the championship game.

Although the end result was the same, the women’s game was a different story.

The top-seeded Illini drew a matchup against fourth-seeded Wisconsin-Whitewater. The teams met three times during the regular season, and Illinois swept the series.

After having so much success against Whitewater it could have been easy to get complacent, but the Illini came out on fire. They won by a final score of 62-18, and led by as much as 50 points during the game.

As a team the Illini outrebounded Whitewater 46-26. Not so coincidentally they also dominated scoring in the paint, leading them 34-6.

Women’s head coach Stephanie Wheeler previously said that Texas-Arlington has been their toughest competition, but that they could not overlook Alabama either. Regardless, the women will not play again until 2:00 PM on Sunday, where they will look to avenge last year’s loss in the national championship.