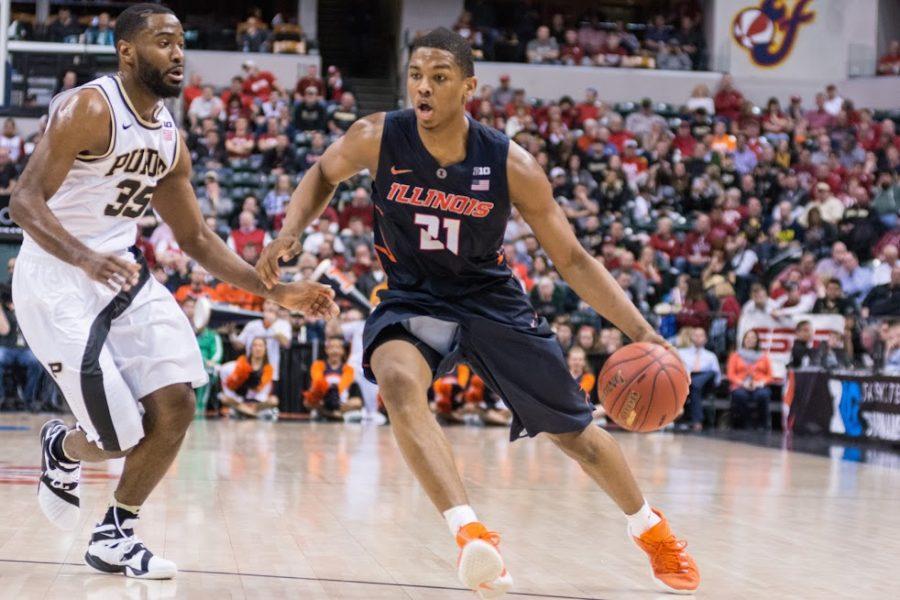 Illinois’ Malcolm Hill drives to the basket around Purdue’s Rapheal Davis in the quarterfinal of the Big Ten Tournament. The Illini lost 89-59.

Tweet: Illinois’ season ends in BTT in a blowout quarterfinal loss to Purdue

Illinois couldn’t afford to come out sluggish in the quarterfinal of the Big Ten Tournament Friday, but they took the floor flatter than the state they hail from.

The Illini made it respectable against No. 13 Purdue for the game’s first 12 minutes before a 15-0 run put the Boilers well on their way to a 89-58 blowout win Friday at Bankers Life Fieldhouse in Indianapolis.

That initial scoring burst was just the start of an avalanche.

The Boilermakers took a 45-25 lead into halftime and didn’t let up in the second, blitzing the Illini inside the paint and out. Purdue got revenge on Illinois for its January upset at State Farm Center earlier this season and then some. The Boilermakers played like they had something to prove.

Purdue was able to do everything in the rematch that they weren’t able to do in that 84-70 loss in Champaign, and the Illini couldn’t replicate any of the success they had. Illinois was unable to deny entry passes to Purdue’s massive frontcourt, and AJ Hammons, Isaac Haas and Caleb Swanigan feasted in the paint. The Big Three combined to score 37 points and snatch 23 boards on the afternoon.

“They played good inside and outside ball,” a somber Kendrick Nunn said after the game. “They’re a tough cover.”

That interior presence freed Purdue’s sharpshooters on the perimeter. Ryan Cline and Dakota Mathias looked lost in the first game against the Illini but came out hot Friday, burying a combined 6-of-10 threes. Their teammates joined in on the fun in the second half as Purdue piled on, finishing the game with a 48 percent shooting clip from deep to go with 34 points in the paint. When they’re rolling on both fronts like that, Purdue is pretty much unstoppable.

The four seed took care of business Friday, but Illinois made it much easier for them to do so with their lackluster performance. The team who led Iowa nearly throughout on Thursdaywas nowhere to be seen, and the squad that took four losses of 25 points or more in the regular season was back.

The Illini looked drained during their third game in as many days. Shots were flat, cuts weren’t crisp and Illini players were late on their defensive rotations as they scrambled to keep up with Purdue’s whiplash-inducing ball movement.

Malcolm Hill, bless his heart, did everything he could to keep the Illini in the game early. His patented fall-away jumper was working on the way to 16 points, but Illinois couldn’t get much else going on offense. Kendrick Nunn and Jalen Coleman-Lands were smothered at the three-point line, Maverick Morgan didn’t have his usual consistent touch around the basket in the first half and the Illini’s point guard production faded back into extinction.

Illini fans had reason to be optimistic following two straight impressive performances, but the above factors culminated in a Big Ten Tourney humiliation to end Illinois’ season.

And what a depressing season it was. Injuries derailed it before the first game, and Illinois was never able to get on track. With their loss Friday, the 2015-16 Illinois basketball team tied the school record for losses with 19.

Of their 15 wins, only two were truly impressive. The first was the aforementioned handling of then-No. 20 Purdue in January, and the second was Thursday’s upending of No. 20 Iowa. The majority of the remaining wins came in the types of games Illinois basketball should never lose.

The final chapter on a dark season of Illini hoops has now been written, but where the program goes from here remains to be seen. With their elimination Friday, the Illini guaranteed they’ll miss the NCAA tournament for the third consecutive season for the first time since 1980. No matter how much a portion of the fan base demands his firing in the immediate aftermath of this loss, we know head coach John Groce will be retained for next season. He’ll enter it under extreme pressure to break that NCAA tourney drought.

“I haven’t had a ton of time to think about (next season),” Groce said after the game. “Once we get a chance to catch our breath we’re going to put a heck of a plan together and give ourselves the best chance to improve and get better.”

It was nice to reward the fans with a thrilling win in the Big Ten Tournament and finish the season on somewhat of a high note. It also had to feel good for the players who, to their credit, never gave up on their coach or each other.

But as injuries heal and a long offseason looms, Groce and his players must buckle down and do everything they can to improve the team as a whole. They’ve got a lot of work to do.